You Are Here: The Companion Volume 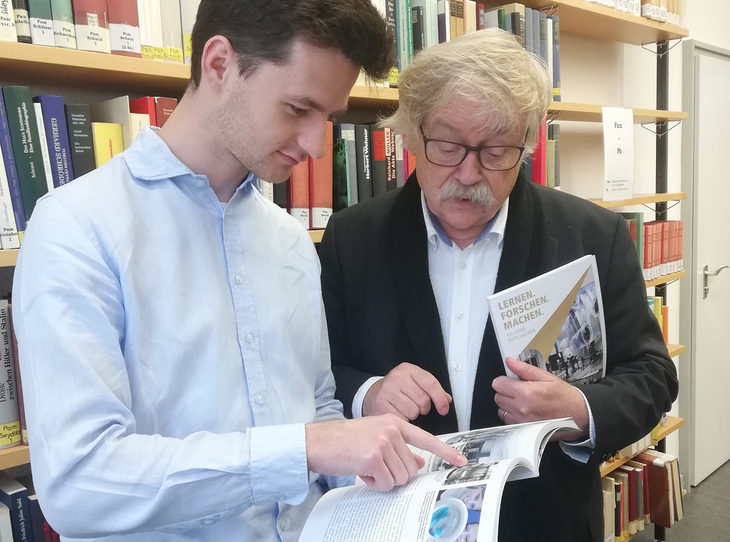 To accompany the University's anniversary exhibition – Lernen. Forschen. Machen. 150 Years of RWTH Aachen University – RWTH has published a volume that highlights its 150-year history from numerous different perspectives. 35 short articles by a total of 37 authors – including Jannis Koesling (left) and Max Kerner on the photo – shine a light on both the past and the current activities of the University. The texts were not written exclusively for academics, rather deliberately for a wider audience, because RWTH sees itself as a crucial part of Aachen and the local area.

For example, the relationship between the University and the city, which was rather bumpy in the early years, is addressed. Yet even today, when walking past RWTH's buildings, many Aachen residents wonder "What are they actually doing in there?" This volume provides clear insights and answers to these and other questions. For example, the question of the University's responsibility to society because RWTH sees this as one of its essential tasks.

It also explains how RWTH became a University of Excellence and a university of go-getters with an extremely impressive start-up scene. In addition, the volume indicates what RWTH is doing to offer its now more than 47,000 students new teaching methods for the best possible degree program of international significance.

But the University's failures are also addressed: its role in the Nazi era and the lack of a clear stance regarding the treatment of Jewish instructors and students at the time. The University also failed to make public the past of former rector Hans Schwerte, whose real name was Hans Ernst Schneider and who worked in the SS during the Nazi regime, even after there had already been numerous indications of his double identity. This was ultimately uncovered after investigations by a Dutch news team, sparking an international sensation and the biggest scandal for the University to date.

The RWTH companion volume is available at a price of 19.80 euros.

It can currently be purchased here:

And the following bookstores: