You Are Here: University Medal for Emma Saad 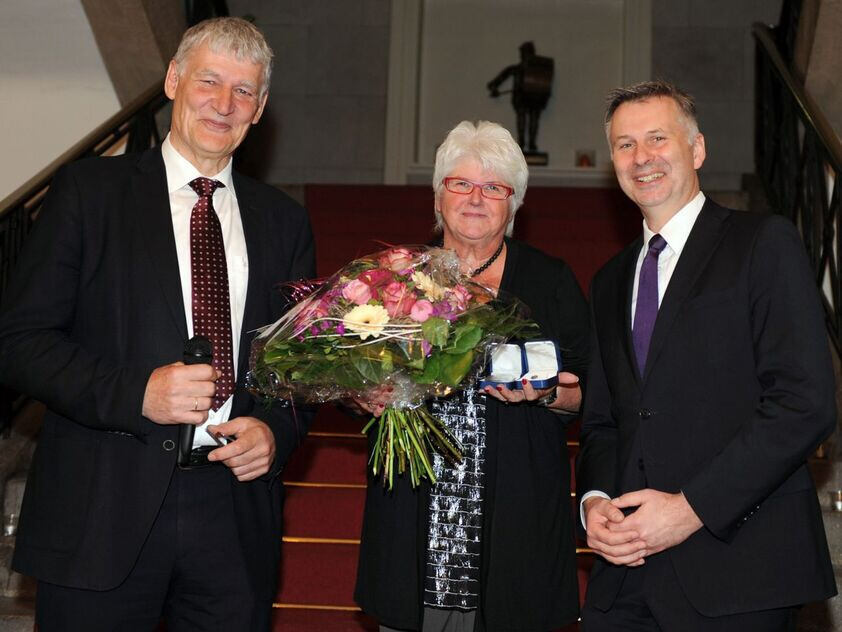 The Senate of the University decided to present Emma Saad with the Medal because "from the beginning of her work at RWTH Aachen, she has shown tremendous commitment and dedication to the University, much more than can be expected. With expertise and foresight, as managing director, she significantly contributed to the professionalization the Dean's Office of the Faculty of Mechanical Engineering, one of the largest faculties at our University."

One day before her retirement, the University surprised Ms. Saad with the presentation of the medal.

The German Studies graduate started her career in the winter term of 1970/71, as a student assistant at the Study Advice Center of the Faculty of Mechanical Engineeering. Apart from a short stint at the Goethe institute in Algier, Saad has been working for RWTH Aachen since then, in various positions. In 1997, she became Head of the Office of the Faculty of Mechanical Engineeering; in 2008, she was appointed managing director of the Dean's Office.

More than a Superior to Staff and Students

Saad was dedicated to many causes in the faculty and the University: she was a member of the Good Academic Practice working group, supported internationalization at the faculty level, was one of the first to organize graduate ceremonies, and imparted her experience to others in knowledge management seminars by the Center of Higher Education Development, CHE. With her "open doors" policy, she gained the reputation of one who was "much more than a superior."

In 2012, the mother of two and grandmother of two received the family-friendly award "FAMOS für Familie." She was nominated for the award for implementing family friendly workplace policies.