You Are Here: ERC Advanced Grant Success for Martin Grohe and Heinz Pitsch 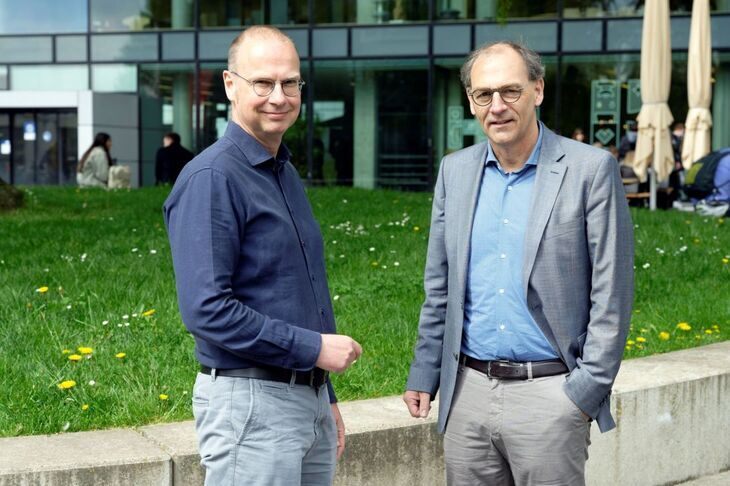 The Advanced Grants are among the most prestigious research awards of the European Union. They are awarded to established, leading principal investigators who want to secure long-term funding to pursue a ground-breaking, high-risk research project. Martin Grohe is head of the Chair of Computer Science 7 (Logic and Theory of Discrete Systems), Heinz Pitsch holds the Chair of Technical Combustion. Both researchers will now receive up to 2.5 million euros each for their research and the equipment that it requires.

Heinz Pitsch is primarily conducting research into renewable energy sources in the area of thermochemical energy conversion. Hydrogen-based fuels play a special role in this context, as they do not produce any climate-damaging exhaust gases and can be used for the storage and transport of energy produced by solar and wind power plants. The combustion of hydrogen offers great advantages, but is also associated with a number challenges that are addressed in the HYDROGENATE research project. In contrast to conventional fuels, flame instabilities occur during hydrogen combustion. These instabilities may significantly increase combustion rates and the emission of harmful nitrogen oxides. The details of the these processes are currently still unclear.

The aim of HYDROGENATE is to collect data from experimental studies and numerical simulations that can be used to analyze physico-chemical processes. The aim is to derive a quantitative description by combining physical expertise with artificial intelligence methods. The targeted exploitation of instabilities makes it possible to optimize the processes in hydrogen-fueled combustion engines and industrial burners. In this way, the research makes an important contribution to the transition to renewable energy.

Pitsch completed both his undergraduate and doctoral degrees at RWTH. Afterwards he completed a one-year postdoc stay at UC San Diego. He was a professor at Stanford University from 2003 to 2013 and has been director of the Institute for Combustion Technology at RWTH since 2010. In 2010, he received his first ERC Advanced Grant. Pitsch has received several honors and awards, including the International Prize of the Combustion Society of Japan. He is the first researcher to receive the Andre Jaumotte Chair Award bestowed by the Belgian Royal Academy of Sciences.

Martin Grohe’s key research topics include algorithms and complexity, logic, database theory, graph theory, and machine learning. The goal of his ERC project is to develop an overarching theory of graph similarity and to demonstrate its applicability to practical problems. Graphs are versatile models for representing complex data ranging from chemical molecules to social interactions. When analyzing graph-based data, a fundamental task is to compare graphs and measure their similarity in a semantically meaningful way with the help of efficient algorithms.

Despite its importance in many domains, graph similarity has so far only been studied for specific applications. A well-known problem in computer science is the so-called graph isomorphism problem, whose solution requires an efficient algorithm that decides whether two graphs are structurally identical. Grohe and his team will now tackle this problem from the angle of similarity theory.

Grohe studied mathematics at the University of Freiburg, where he also completed his doctorate and postdoctoral teaching qualification. Since 2012, he has been Professor of Computer Science at RWTH Aachen University. Previously, he worked at Humboldt University Berlin, the University of Edinburgh, the University of Illinois, Stanford University, and the University of California at Santa Cruz. The computer scientist has been an ACM Fellow since 2017, and his awards include a Koselleck Grant and the Heinz Maier Leibniz Prize from the German Research Foundation.