You Are Here: Production of High-Quality Synthetic Graphene for Industrial Applications Within Reach

Production of High-Quality Synthetic Graphene for Industrial Applications Within Reach

Scientists from RWTH Aachen and Forschungszentrums Jülich have published a research paper in the scientific journal "Science Advances". 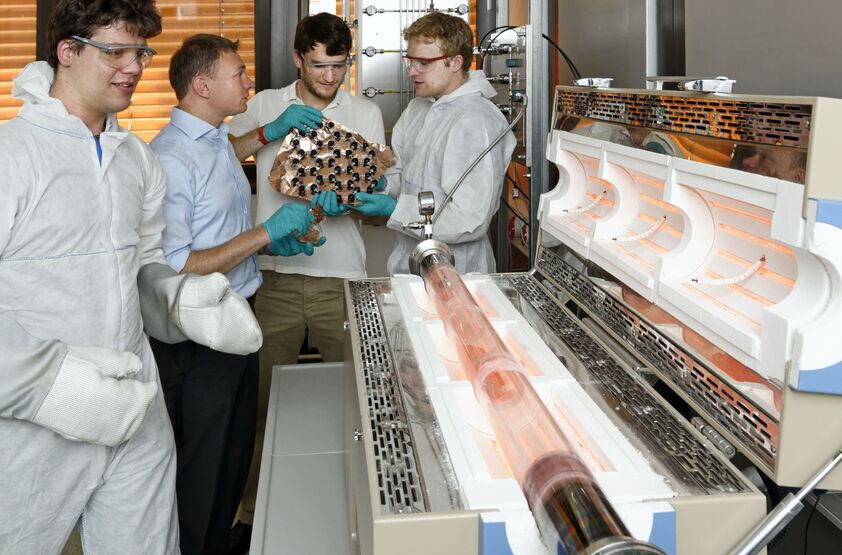 Graphene consists of a single layer of carbon atoms, is highly flexible and mechanically extremely stable. An optically transparent material, it conducts electricity better than any other material.

The combination of these properties is unique, and it is expected that the use of the “wonder material” graphene will lead to technological breakthroughs – in touch screen technology or in flexible optoelectronics, for example.

So far, the production of graphene was problematic: in 2004, in an unconventional experiment, the British-Russian scientists Andre Geim and Konstantin Novoselov used adhesive tape in order to separate a single layer of graphene from a piece of natural graphite.

Now, two early-career researchers, Luca Banszerus and Michael Schmitz, as well as other researchers from RWTH Aachen and Forschungszentrum Jülich, achieved a decisive breakthrough. Banszerus and Schmitz, who are students in the Physics Master’s course of study at RWTH Aachen, are exceptional talents who already received several prizes and awards. In 2010, they won the “Jugend Forscht” youth science competition, working together on a project on the topic of graphene.

The research was conducted as part of the Jülich Aachen Research Alliance, JARA for short, under the direction of Professor Christoph Stampfer, who is Head of the Institute of Physics II at RWTH Aachen. It received funding from the German Research Foundation (DFG), the “Flagship Graphene” project of the European Commission, and the ERC Starting Grant for Christoph Stampfer. As Stampfer explains, “the results represent a significant advance in the effort to close the gap between scientific research and technological application of graphene.”

The research by Banszerus and the entire team led to the publication of a scientific paper in the journal Science Advances, entitled Ultrahigh-mobility graphene devices from chemical vapor deposition on reusable copper (1.e1500222, 2015), which presents the novel production method for ultra-high-quality graphene.

Production of the material is based on chemical vapor deposition (CVD), using the reaction between the chemical compound methane and a heated copper surface to fabricate large, flawless graphene flakes. The CVD method is scalable and cost-efficient, but so far the resulting graphene was of a lower quality than natural graphene produced using the “sticky tape method”. This quality problem has now been addressed.

The research team demonstrates that there is no longer a difference in quality between the mechanically exfoliated and the chemically synthesized graphene. The quality of CVD-grown graphene depends critically on the used transfer process – until now, the graphene was transferred using a wet-chemical method which affects the quality of the material.

The method used by Banszerus and his colleagues enables a dry transfer which retains the high quality of the chemically grown graphene. Furthermore, the advanced transfer technique allows reusing the copper substrate of the CVD growth, which saves expenditures and resources in the production of graphene.