You Are Here: Observation of Spectacular High-Energy Cosmic Neutrino

RWTH physicists working on the IceCube Neutrino Observatory significantly contributed to this discovery. 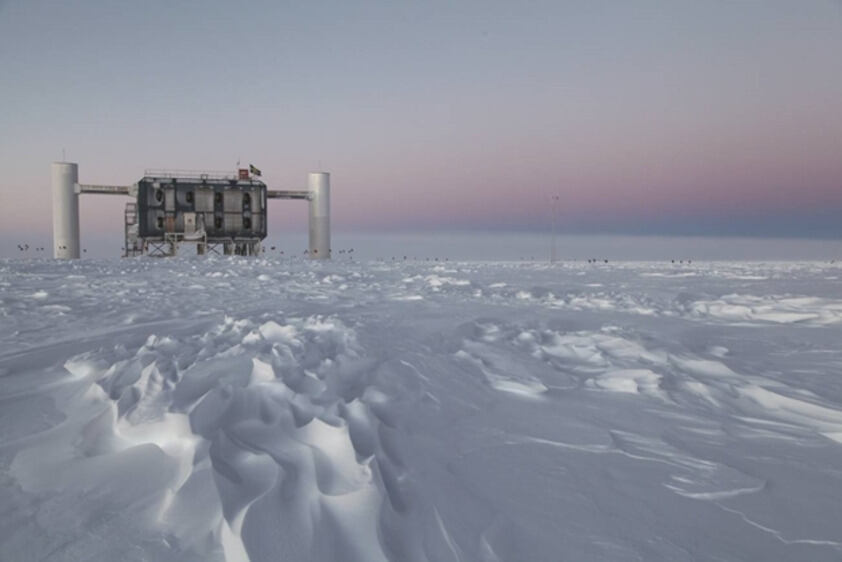 Physicists from the IceCube Neutrino Observatory have presented the observation of a neutrino with unprecedented high energy at the 34th International Cosmic Ray Conference in The Hague, Netherland, on August, 4th 2015.

The Earth is continuously bombarded by high-energy cosmic rays with extremely high energies up to ten million times higher than energies produced at Earth in man-made particle accelerators like the Large Hadron Collider (LHC).

Though these cosmic rays have been discovered more than hundred years ago, their sources in the universe are still unknown. This remains a prime mystery to modern physics. To solve this puzzle, more than 50 years ago physicists proposed to measure cosmic neutrinos as signals from these sources, because neutrinos travel undisturbed on straight paths through the universe. However their detection is challenging and requires extremely large detectors. 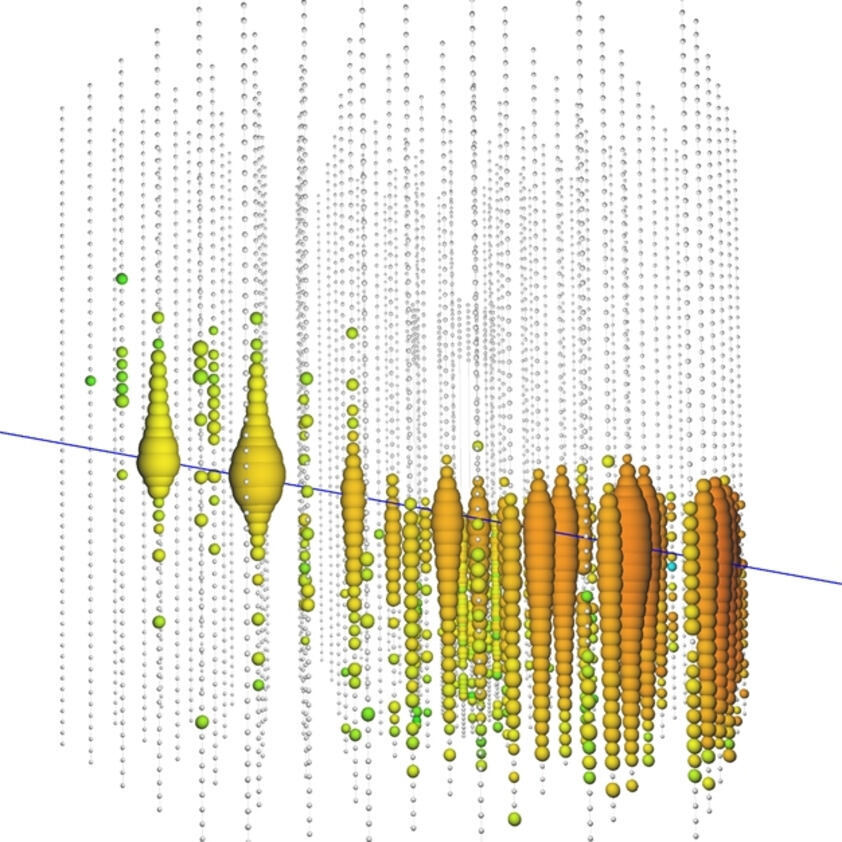 After several decades of development, the construction IceCube Neutrino Observatory at the geographic South Pole was completed in 2010 by an international collaboration of 310 scientists from 44 institutions in 12 countries.

The collaboration is led by the University Wisconsin Madison, USA. IceCube is the largest neutrino detector on Earth and instruments about 1km³ of clear glacial ice with ultra-sensitive light sensors. These measure the faint light that is produced in neutrino interactions with the ice of the detector. Already with the first years of data a cosmic neutrino signal was discovered.

With the new data covering six years of operation, physicists from the IceCube collaboration have now improved these previous observations. In the recorded data of multiple billion background events they have first extracted an impressive sample of 340,000 interactions of muon neutrinos.

These originate mostly from neutrinos that have been produced by cosmic ray interactions with the Earth’s atmosphere. However one of these sticks out. It is an extremely high energy neutrino that is most likely of cosmic origin. Leif Rädel, a scientist at the RWTH Aachen University who discovered this event, says: “It is a neutrino induced muon that travels through the full width of the instrumented detector. During this it loses an energy of about 2.6 PeV which is expected from a muon between 4 and 5 PeV. The neutrino energy must have been even larger.”

Co-discoverer Sebastian Schoenen from RWTH Aachen explains: “This large energy not only breaks the world record of 2.2 PeV of a neutrino that was observed by IceCube in 2013. Furthermore, it is a long track and its direction can be measured with an accuracy better than 1°. This allows to search for astronomical sources in the direction of this event.”

Professor Dr. Christopher Wiebusch, who leads the Aachen team, summarizes: “The group at RWTH Aachen has focused on this search. Already for the analysis of the first data which had shown indications of a cosmic signal the Aachen physicists Anne Schukraft has been rewarded with the Hertha-Sponer-Preis by the German Physics Society (DPG) in 2014. This has encouraged us to continuously improve our analysis methods. This success is a great reward for many years of hard work.” 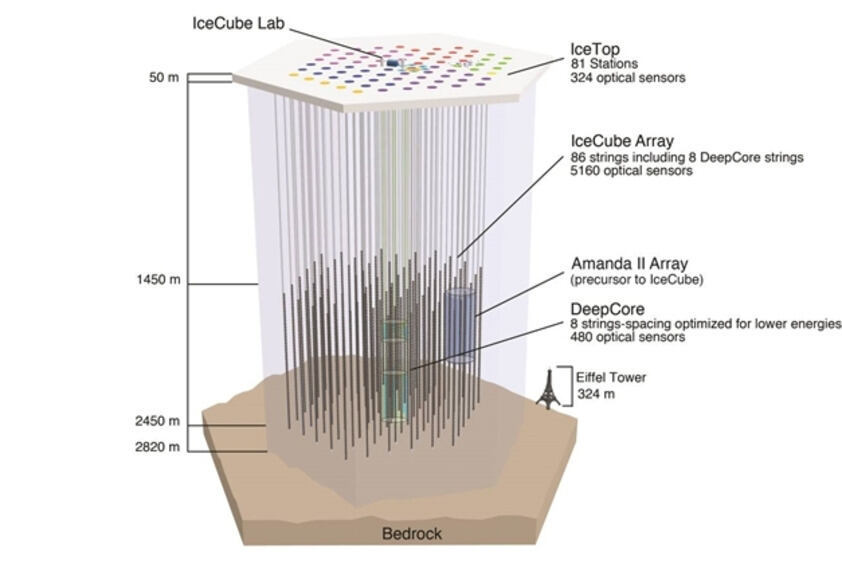 The spokesperson of the IceCube collaboration, Prof. Dr. Olga Botner from the University of Uppsala (Sweden) clarifies the future perspective: “The observation of this multi-PeV muon neutrino signifies yet another step in the exploration of the unknown high-energy universe. Since a muon neutrino event can be reconstructed with superior pointing resolution, the discovery of this very energetic muon brings us closer to achieving IceCube's prime goal: the unveiling of the sources of the highest-energy cosmic rays."

She notes: "Although the event was discovered in an analysis effort at RWTH Aachen, the excitement is shared by the full collaboration. IceCube's success hinges on the joint achievements of our international team – from construction of the detector itself, to calibrations, data taking and development of analysis tools."

The IceCube Neutrino Observatory was built and is operated under the governance of the US National Science Foundation (NSF), with assistance from partner funding agencies around the world from the U.S., Germany, Sweden, Belgium, Switzerland, Japan, Canada, New Zealand, Australia, U.K. and Korea.

The contribution of the 9 German Universities and research labs is based on their infrastructures and funding by the German Ministry for Education and Research (BMBF), Deutsche Forschungsgemeinschaft (DFG) and the Helmholtz Alliance for Astroparticle Physics (HAP).

Figure 1: The IceCube Lab in March, 2012. The IceCube Laboratory at the Amundsen-Scott South Pole Station, in Antarctica, hosts the computers collecting raw data. Due to satellite bandwidth allocations, the first level of reconstruction and event filtering happens in near real-time in this lab. Only events selected as interesting for physics studies are sent to UW-Madison, where they are prepared for use by any member of the IceCube Collaboration. Credit: Sven Lidstrom, IceCube/NSF

Figure 2: Perspective view of the neutrino event, recorded by IceCube on June 11, 2014. Shown are the sensors of IceCube as black dots, which instrument a cubic kilometer volume in the Antarctic ice at the South Pole in depth between 1450m and 2450m. Shown in colored spheres are those sensors that measured a light signal, almost synchronously within about 3 microseconds. The colors indicate the arrival time of the signal from red (early) to green (late) and the size of the sphere the intensity of the signal. The line indicates the reconstructed particle track that travels through the detector at almost the speed of light. Because of its high energy, the glowing of the track is so intense that it is observed by sensors several hundred meters away from the track.