The RWTH Aachen Department of Chemistry held a Chemistry Day. The event's program included student reports about research internships and reports from alumni about their every day professional life. The new graduates also received their diploma certificates among their families and friends. 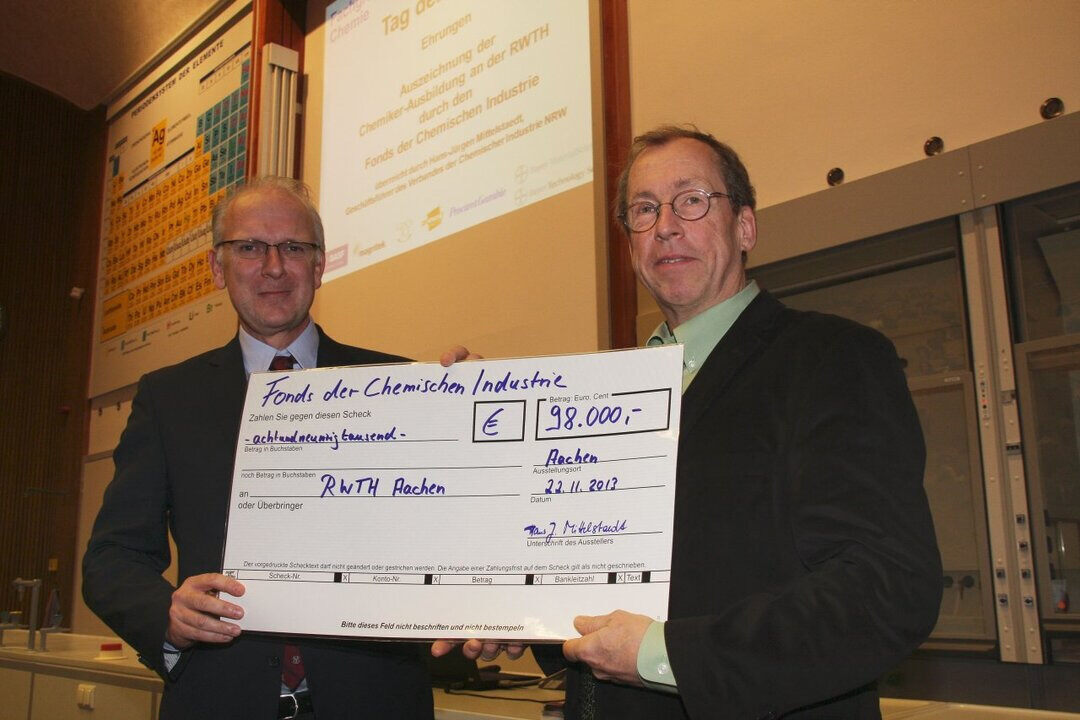 Four of the graduates were honored with the award: Marko Hermsen and Patrick Tomkins received the Schöneborn Prize, in remembrance of former RWTH Professor of Mathematics, Dr. Heinz Schöneborn. The award is endowed with 1300 euros.

Raphaele Kannengießer and Pierre Türschmann were the happy recipients of the Procter & Gamble Prize, endowed with 1000 euros.

Procter & Gamble Germany GmbH & Co. honors the best graduates in the Master of Science in chemistry course of study.

The RWTH Aachen chemistry students profited from another award. The Aachen university received – together with twelve additional universities – funding from the NRW branch of the German Chemical Industry Association, VCI for short. 33 chemistry departments applied for the funding. The Aachen proposal was accepted.

The excecutive director of the association, Hans-Jürgen Mittelstaedt, presented a symbolic check during the event for a total sum of 98000 euros. The Department of Chemistry will now order two Spinsolve Benchtop NMR spectrometers. The new construction of the equipment makes it possible for students to operate them themselves in the lab and for chemical reactions to be observed during trials. Only trained personnel could operate the equipment till now due to its complexity and their high costs of hundreds of thousands of euros. RWTH Aachen agreed to pay 20 percent of the cost when submitting the proposal.