You Are Here: Can Crops Be Vaccinated?

Can Crops Be Vaccinated?

RWTH biologists want to strengthen the immunity of plants with interdisciplinary and supra-regional cooperation. This can secure sugar beet production and thus jobs in the Rhenish mining district. 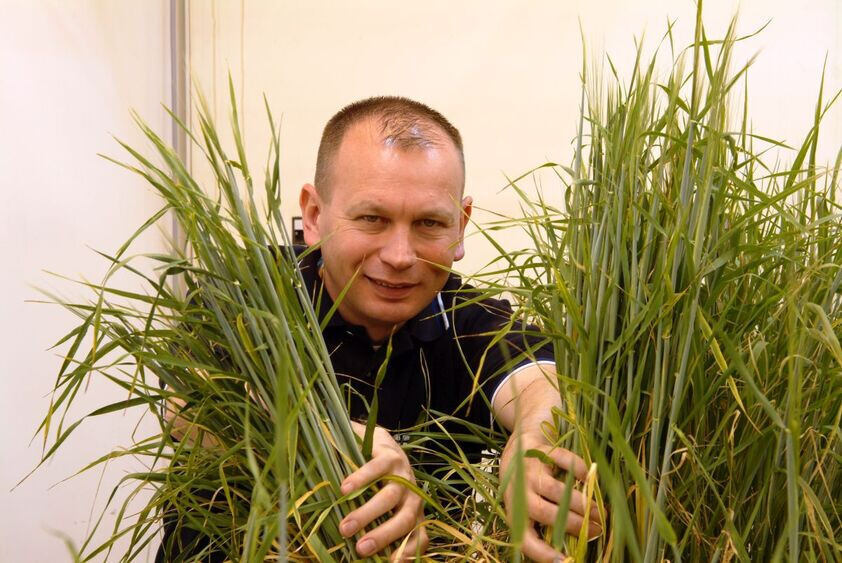 Ultimately overshadowed by the coronavirus crisis, 2020 was the International Year of Plant Health, as proclaimed by the United Nations. The world’s growing population has an enormous demand for food but also for textiles, medicines, and fuels made from plants. "Today, however, around 40 percent of crop yields are still lost to pests and diseases," says RWTH Professor Uwe Conrath, Head of the Department of Plant Biochemistry and Molecular Biology, where systemic acquired resistance, a component of the plant immune system, is being researched. The resistance can be provoked by a moderate initial infection – similar to vaccinations for humans.

Years ago, Conrath coined the term “defense priming”: He had discovered that a fungus-infected cucumber plant developed resistance not only to that particular fungus, but to a wide range of fungi, bacteria, viruses, and abiotic stresses. When the cells come into contact with the pathogen, they enter a state of alert, he explains. The plant synthesizes protein molecules, for example, which then lie dormant in its entire organism and are only very strongly activated when attacked again. Therefore, priming – sensitization after initial infection – is an extremely energy-efficient reaction: It is only switched on in an emergency and does not inhibit the growth and yield of plants.

These research results are of interest to the manufacturers of plant protection products, with whom the teaching and research area cooperates. This is because pesticides are often effective against individual or only a few pathogens. In addition, there is a risk that they will also eliminate beneficial insects or that chemical residues will remain in the groundwater as well as on the crops. According to the molecular biologist, there is, therefore, a great interest in natural or near-natural substances. On the one hand, they are supposed to have a toxic effect against the pathogens, but on the other hand, they are supposed to stimulate the plant's own defense system.

Using the defense priming of plants

Together with chemists and process engineers from RWTH, partially automated testing systems were developed to detect substances that induce defense priming in plants. One system takes advantage of parsley's ability to produce fluorescent compounds that indicate the defense response has been activated. The parsley cell culture glows particularly brightly in UV light when an agent strengthens its immune system. "What works for parsley is also possible for other plants," Conrath assures.

Conventional pesticides also pollute the environment because rain washes them off crops and farmers have to reapply them over and over again. For this reason, the Aachen-based biologists Conrath and Professor Ulrich Schwaneberg, in cooperation with other research institutions, have developed "anchor peptides" that adhere to plant surfaces from nature, for example from bed bugs. They were combined with an antimicrobial protein from the skin of a tree frog so that the protein could remain on the leaves after rainfall. The patented adhesion process has already been tested on crops such as soybeans, avocados, corn, and blueberries. The anchor peptides are also used in conjunction with so-called gel containers, which were designed by Professor Andrij Pich from the RWTH Institute of Technical and Macromolecular Chemistry. These containers can be loaded with active substances as Green Release technology. When exposed to moisture, the gels swell, their pores widen and release the substance. In the process, the anchor peptides prevent the rain from washing down the gel reservoir.

Beet research for structural change in the district

Sugar beets are another focus of the research of the teaching and research area. Germany is the world's fourth-largest producer of sugar beet, with just under 26,000 farms in the country, according to the German Association of Sugar Technologists. With climate change, a new pathogen has migrated from France: Cixiidae suck on leaves and transmit a protobacterium that causes “Syndrome des Basses Richesses”, or SBR for short, which causes beets to become smaller, rot faster, and have low sugar content.

At present, no insecticide has been approved against Cixiidae. In Baden-Württemberg, where SBR first appeared, this has already led to enormous crop losses. For this reason, the State Ministry for Rural Areas is supporting the search for priming substances with a six-figure-euro funding package. "We hope to be able to find an active substance from a library of natural substances," Conrath emphasizes. There is a chance that the substance will also protect the sugar beet from other bacteria, fungi, and viruses thanks to the primed immune response.
The Rhenish mining district is also one of the main sugar beet growing regions in Germany. After the end of coal mining and power generation, the region wants to focus on modern and sustainable agriculture, among other things. The Lower Rhine Bay already has a closed value chain from sugar beet cultivation and sugar factories to the production and distribution facilities of the confectionery industry. Unlike lignite, previously the key product of the district, sugar beet and its residues are also renewable raw materials. "Many jobs depend on beets," Conrath points out, "which makes our research so important to structural change in the district."