You Are Here: Research Banking on Peels of Shrimp

Research Banking on Peels of Shrimp

The new laboratories of the Aachen-Maastricht Institute for Biobased Materials, AMIBM, have been inaugurated. 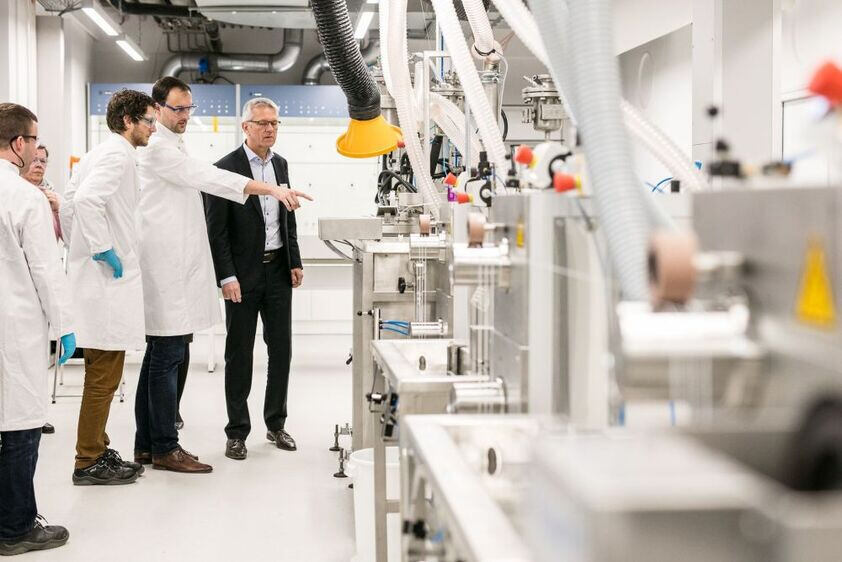 The Aachen-Maastricht Institute for Biobased Materials, AMIBM, has officially been openend on the Brightlands Chemelot Campus in Geleen. The AMIBM stands for a new form of collaboration between Maastricht University (UM), RWTH Aachen and the Fraunhofer Institute for Molecular Biology and Applied Ecology (IME) in Aachen. The Dutch provence of Limburg also supports the AMIBM.

The binational institute has moved into a 1500 square metre facility on the Brightlands Chemelot Campus, where approximately 50 staff from UM, RWTH and the Fraunhofer IME now work on developing new biomaterials. In these laboratories, sustainable materials are being tested, which, for instance, have been created with the help of deep-sea bacteria on the basis of waste products from mechanically peeled shrimp. "I see a great future here for outstanding research," RWTH rector Ernst Schmachtenberg said at the inauguration. Biologists, chemical scientists, engineers and medical practitioners from 16 different countries work together at the AMIBM. "This certainly is a blueprint for successful cross-border cooperation within the research community," explained Professor Martin Paul, president of Maastricht University.

At the inauguration, the AMIBM also presented a "bi-component wet spinning line" for the development of medical fibres, which is unique in the world. With this equipment, measuring almost 20 metres in length, bio-based fibres can be spun at room temperature from a polymer-based solution. This is even possible with two different types of bio-based polymers at the same time, which, together, can be used to produce bicomponent fibres. This is how different fibres can be combined – for example strong and antibacterial fibres for implants. Later, these fibres are coated with a glaze which provides the materials with further medicinal properties. AMIBM develops these special fibres for implants, for example heart valves.

The scientists working in Geleen are furthermore launching a new "Bio Tex Fieldlab." This is a testing area for the production of fibres and yarns made out of bio polymers available in the future. It is also being established in the AMIBM laboratory on the Brightlands Chemelot Campus. The goal is to produce biobased polymers for the textile industry at marketable prices. Project partners are AMIBM, Modint – the Dutch trade organization of over 600 businesses in the areas of clothing, fashion accessories and interior decorating – and CHILL, the Chemelot Innovation and Learning Labs. In addition, a collaboration with biopolymer and textile producers is being planned. Project partners of "Bio Tex Fieldlab" will be sponsored with 760.000 euros by the Operationeel programma Zuid-Nederland – OP Zuid.