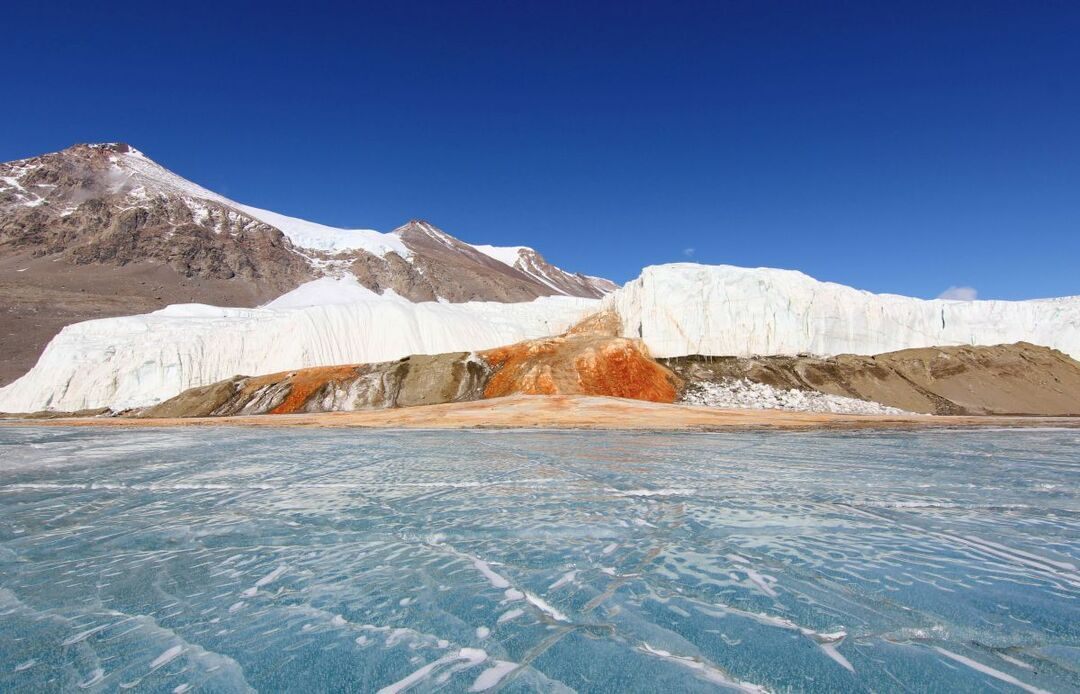 Since the first traces of liquid oceans under the thick sheets of ice on some moons in the outer solar system, there has been speculation about whether independent life could have developed there. With this in mind, Saturn's small moon, Enceladus, is of particular interest, as it spits water particles into space from crevices on its south pole. The NASA Sonde Cassini was able to find evidence of simple organic compounds in the particles. A land mission to investigate this water resources was a decisive step in answering the question about life there. The remoteness and extreme conditions pose a particular technical challenge to future space missions.

The Enceladus Explorer, EnEx, project, initiated and funded by the German Aerospace Center, DLR, has made an important first step in which scientists from six German universities have come together to form a team. The goal of the EnEx project was the development of key technologies for retrieving an uncontaminated water sample on Enceladus, the investigation of mission scenarios, and as realistic a test as possible of the developed technologies on Earth. This field test was conducted in collaboration with American scientists, whose project, MIDGE, Minimally Invasive Direct Glacial Exploration, was simultaneously funded by the American National Science Foundation, NSF. The goal of the joint MIDGE/EnEx project was to extract the first uncontaminated subglacial, that is from under the ice, water sample from Blood Falls, Antarctica. 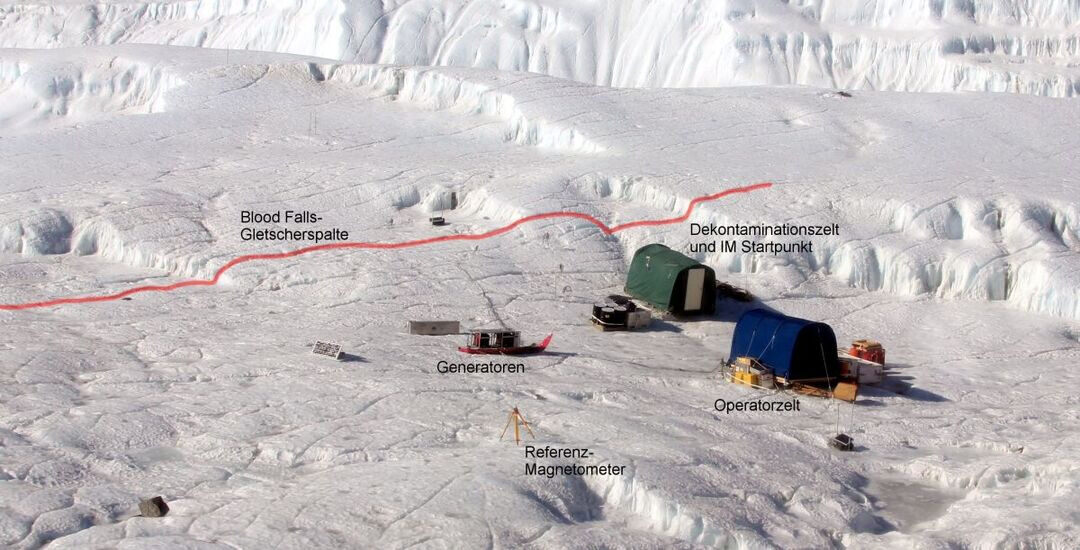 © Dirk Heinen, RWTH Aachen Setting up the expedition camp: The drilling site is located somewhat above a crevice leading to Blood Falls (red). The drilling takes place in a tent. With minimum invasion it will retrieve a water sample before it is exposed to the air outside.

A crucial key component for such a mission is an ice-melting probe that can be directed and navigated freely through the ice and is able to "see" through the ice and know its exact position. The necessary navigation technology has been developed in the past three years by experts at at FH Aachen, RWTH Aachen, TU Braunschweig, the University of Bremen, Bundeswehr University Munich, and the University of Wuppertal, and a melting probe, the EnEx-IceMole, was developed at the Department of Aerospace Engineering at FH Aachen and integrated.

The team has now successfully extracted an uncontaminated water sample for the first time from a depth of 16 meters of ice at Blood Falls. The American scientists are currently analyzing the sample, suspected to have been isolated from the outside world for over one million years with the microorganisms inside, which have adapted to the extreme conditions.

A particular challenge was classifying the field test area as international specially protected area, ASPA or Antarctic Specially Protected Area. This involved very strict restrictions and required the probe to be sterilized step-by-step multiple times. This is also absolutely necessary when it is used in space in order not to contaminate the ice moon with terrestrial microorganisms.

The EnEx partners have demonstrated that developed technologies fundamentally work and can be potentially used on Enceladus. 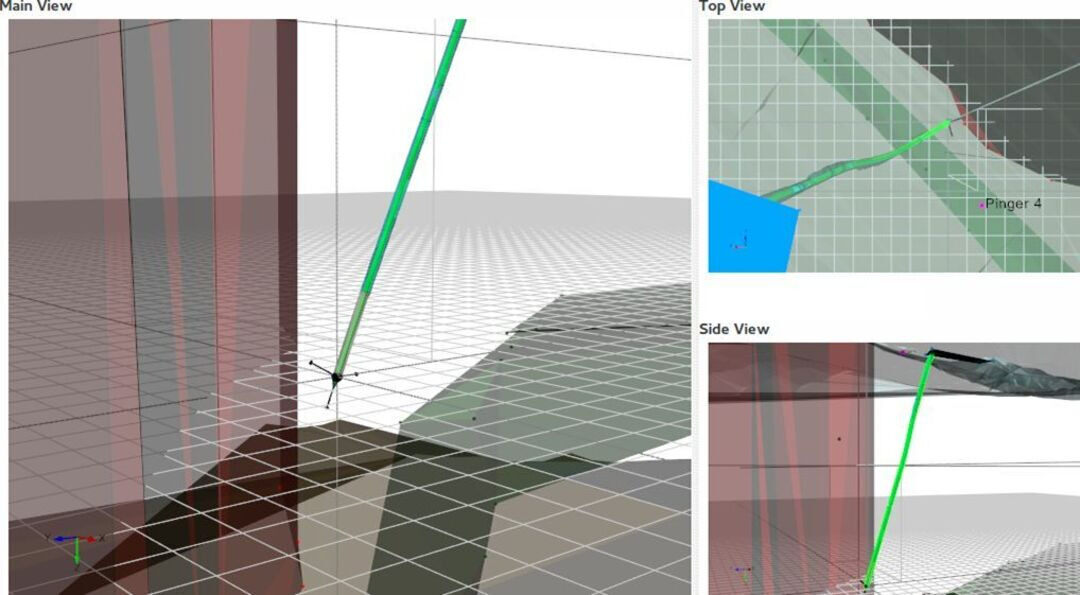 © Joachim Clemens, Universität Bremen The navigation data of the individual systems is combined and illustrate in a graph. The illustration shows the position and location of the probe while the sample was taken: drill hole (green), Blood Falls crevice (red and projected downwards).

Under the direction of Univ.-Prof. Dr.rer.nat Christopher Wiebusch, RWTH scientists at the Institute of Physics III developed and built the ultrasound systems for navigating the drill probe in ice. With the help of elapsed time measurements of sound signals sent from the surface of the ice, the position of the probe can be determined within a few centimeters. The structures additionally enable imaging of the area ahead in the head of the probe, similar to ultrasound equipment in medical technology.

Project coordinator Christopher Wiebusch: "The successful sample extraction is a crowning moment of three years of hard work, where we had to find our way in completely new interdisciplinary surroundings outside of our actual field of research, elementary particles. His colleagues Dipl.Phys. Dirk Heinen is enthusiastic about the experiences from the field test: "Research in the extreme surroundings of Antarctica is a challenge and was a unique personal challenge for me."

The RWTH physicists are already planning the continuation of the successful project. The focus is on the necessary autonomy of the navigation methods in the extreme glacial surroundings. The physicists are collaborating with the RWTH cluster of institutes IMA/ZLW & IfU under the direction of Univ.-Prof. Dr.rer.nat. Sabina Jeschke: "The plans for the new RANGE project have come quite far. With a new approach we have accomplished robust navigation for examining unknown glaciers and extraterrestrial ice structures." A junior research group is also being established in the RWTH Aachen AICES graduate school, which is focusing on the modeling and simulation of contact melting processes with regards to control and regulation optimation. Dr. Julia Kowalski is head of this junior research group.

The Enceladus Explorer Projekt at RWTH Aachen is financed by the Space Administration with funds from the Federal Ministry of Economy and Technology.

Blood Falls is located on the ice tongue of the Taylor Glacier in Antarctica. The brine flowing from the water reservoir is rich with iron ions, which oxide when they come in contact with the oxygen in the air. This is responsible for the spectacular red coloration - hence the name, Blood Falls.