You Are Here: RWTH Professor Frank Schneider Initiates Exhibition in the German Bundestag 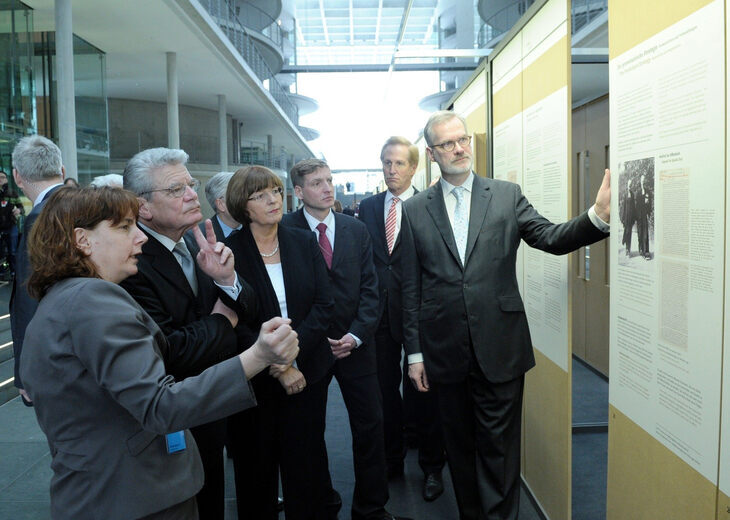 They were forced to undergo compulsory sterilization and to take part in medical experiments, and they were murdered: Diseased and disabled people were among the victims of National Socialism. On January 27, 2014, an exhibition on this topic, initiated by Professor Frank Schneider, Director of the Department of Psychiatry, Psychotherapy and Psychosomatics at RWTH Aachen University Hospital, was opened in the German Bundestag.

The travelling exhibition, titled „Registered, Persecuted, Exterminated: Ill and Disabled People Under National Socialism,” has been organized in cooperation with the German Association of Psychiatry, Psychotherapy and Psychosomatics, DGPPN for short, and the foundations “Memorial to the Murdered Jews of Europe” and “Topography of Terror.” Patron of the exhibition is Federal President Joachim Gauck, who visited the exhibition on the opening day.

From 1934 onwards, about 400000 citizens were sterilized against their will, and about 200000 were murdered in sanatoria and nursing homes. In many cases, in the selection process, medical practitioners played a disgraceful role, assessing patients according to National Socialist categories such as “curable” and “capable of work.”

As Frank Schneider explains, “Ill and handicapped people were seen to put a strain on the ‘national community.’ Their persecution took place from within German society, supported by medical practitioners.” The psychiatrist had already addressed the question of the responsibility of psychiatrists during his term as President of the German Association of Psychiatry, Psychotherapy and Psychosomatics in 2009/2010, establishing a commission to critically investigate the role of psychiatry under National Socialism.

The exhibition, which is organized around the theme of the value of life, investigates the ideological and institutional prerequisites for the murders. It also examines and illustrates the biographies of several victims through personal and family photographs and documents. Administrative documents and patients’ files make the actors involved in these crimes more graspable.

The comprehensive exhibition catalog includes many texts, photographs, and documents. The exhibition, with materials in German and English, will be shown in many locations in Germany and in Europe over the next few years.