You Are Here: The Quest for Dark Matter

The Quest for Dark Matter 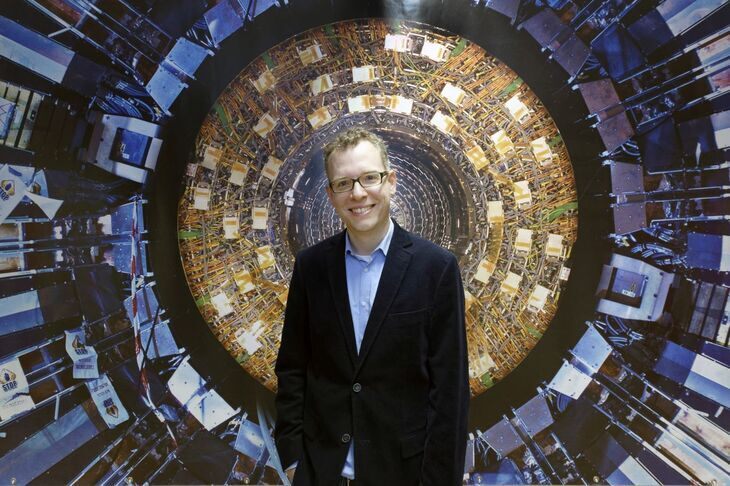 Dr. Alexander Schmidt, who came to RWTH with an ERC Consolidator Grant under his belt, has now obtained a Heisenberg Professorship.

Dr. Alexander Schmidt is convinced that there is a fundamental principle at work in nature which has not – as yet – been understood. The physicist, who joined RWTH a couple of weeks ago, finds it fascinating to work in an area of physics that is concerned with this unsolved question.

Schmidt has two key research objectives: First, he is looking for axions, that is, hypothetical elementary particles that have not been detected as yet. These elementary particles have the potential to explain the phenomenon of dark matter. Second, he wants to better understand the properties of the Higgs boson discovered in 2012. This investigation might lead to the intriguing insight that the Higgs boson, which has been named after Nobel Prize winner Peter Higgs, is not the Higgs boson as predicted by the Standard Model of particle physics. “It is research at the frontiers of knowledge,” said Schmidt.

The Heisenberg professor will contribute to the activities of RWTH's Physics Institute IIIA, which is concerned with particle physics. Heisenberg Professorships are awarded by the German Research Foundation DFG with the aim of preparing up-and-coming researchers for senior roles in science and academia. Previously, Schmidt had received a highly coveted European Research Council (ERC) Consolidator Grant, which brought him to Aachen.

The 40-year-old researcher from Schwetzingen studied physics in Karlsruhe. Before coming to Aachen, he led an Emmy Noether Research Group at the University of Hamburg, which was concerned with the search for heavy vector-like quarks. Now he has redefined his research objectives: with the help of the Consolidator Grant, he seeks to succeed in the first direct measurement of the coupling of the Higgs boson to so-called charm quarks. Participating in an international large-scale collaboration, Schmidt will gain data from a particle detector based at CERN, the European Organization for Nuclear Research, and analyze them in Aachen.

Such data has been gained at CERN for a period of ten years now. Schmidt is involved in the CMS experiment – the Compact Muon Solenoid is one of the four detectors operated at CERN, located in a cavern approximately 100 meters below the surface at the 27 kilometer long Large Hadron Collider. Schmidt has contributed to the construction of the detector and spent five years at CERN. The analysis of the data takes place at RWTH and its computing centers, which provide a significant share of the computing power of the worldwide LHC Computing Grid.

The data analysis process is a bit like searching a needle in a haystack – it is not really up to the task at hand. Every 25 nanoseconds, a collision of protons takes place within the particle accelerator. Each collision results in a megabyte of data for analysis, that is, 40 terabytes per second. A quick, multi-stage selection system reduces this data stream to about one gigabyte per second. In order to manage this 'explosion' of data – so far, only about two percent of the data to be provided by the CMS over its lifetime has been collected – computing centers from all over the world have joined forces to contribute to the project. With the help of pattern recognition and machine learning methods, the relevant slices of data can be identified.

Schmidt is looking ahead with optimism: about one year ago, a new pixel detector with enhanced measuring capability has been installed. It is supposed to run for another year before the detector will be massively upgraded in a two-year shutdown period. The improved measurement technology promises even better data and thus increases the chance to detect anomalies.

And what next? The standard model in particle physics is as yet incomplete. Dark matter continues to live up to its name and elude us: “Particle physics can explain about five percent of matter in the Universe only,” said Schmidt.

The Higgs boson in particular promises to provide further insights, as it couples to all other known massive elementary particles and thus, most probably, to dark matter.“The ERC Consolidator Grant gives me the opportunity to investigate the special properties of the Higgs boson,” explained Schmidt.

This also applies to his research on axions. “I think it’s a realistic assumption that the axion is responsible for dark matter.“ The particle has such a low mass that detectors like those used at CERN are not able to measure it. But Schmidt is optimistic that a new generation of measuring devices will open up new perspectives for research.