You Are Here: A Builder of Bridges Between the Cultures and Religions

A Builder of Bridges Between the Cultures and Religions

A delegation from Aachen also attended the ceremony, including the former Mayor of the City of Aachen, Dr. Jürgen Linden; RWTH Rector Ernst Schmachtenberg; the founding Rector of GUtech Professor Michael Jansen; and Professor Burkhard Rauhut, former Recotor of both RWTH Aachen and GUtech. The current Rector of GUtech is RWTH Professor Emeritus Michael Modigell. 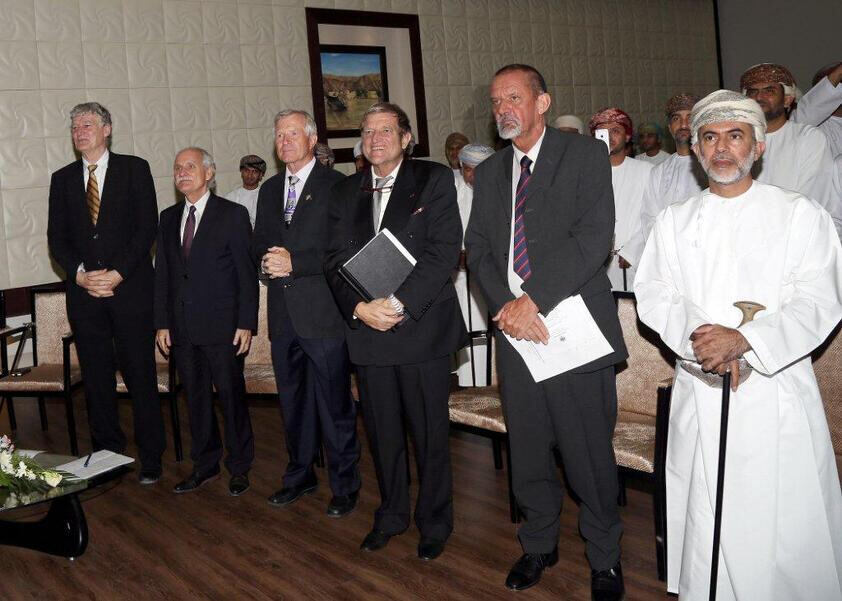 “I would like to thank the Federal Republic of Germany for honoring me with the Grand Cross, and I hope we shall continue to work together as a shining example of excellent human relations and for the future progress of knowledge and science in our societies and nations,” said H.E. Sheikh Abdullah bin Mohammed Al Salmi in his acceptance speech. “Germany is a great nation – diverse and advanced with a rich history and culture. We feel huge admiration and affection for this enchanting and thriving country.”

Several speakers expressed their deep admiration for H.E. Sheikh Abdullah’s life-long work, his notion of tolerance, and for being a bridge builder between Oman and Germany, the Orient and the Occident, as well as between different religions.

“There is an alarming absence of humanity and the will to pursue the human rights. His Excellency, Sheikh Abdullah is different. He knows Islam includes salam – peace – and taslim – devotion,” said Dr. Jürgen Linden, former Lord Mayor of the City of Aachen.

Ambassador Freiherr von Reibnitz honored the awardee’s life work. “You are truly living the value of tolerance.” In particular he lauded the Sheik’s initiative to establish GUtech: “Actions speak louder than words. And you have acted.”

GUtech Founding Rector emphasized the awardee’s longstanding relations with Germany: “Sheikh Abdullah builds bridges. For a long time now he has been on very good terms with Germany and the Germans, and especially with two German cities and universities: the University of Tübingen and RWTH Aachen.”

Established in 2007, GUtech already has gained a high reputation. In cooperation with Omani investors, RWTH Aachen coordinated the establishment of the university according to its academic standards. There is a strong focus on collaboration between teaching, research, and the regional industry – a concept that has proved to be successful for RWTH Aachen. All Bachelor's programs offered by GUtech are internationally accredited.