You Are Here: RWTH Rector Accompanies Research Minister Wanka on Her Visit to Beijing and Shanghai 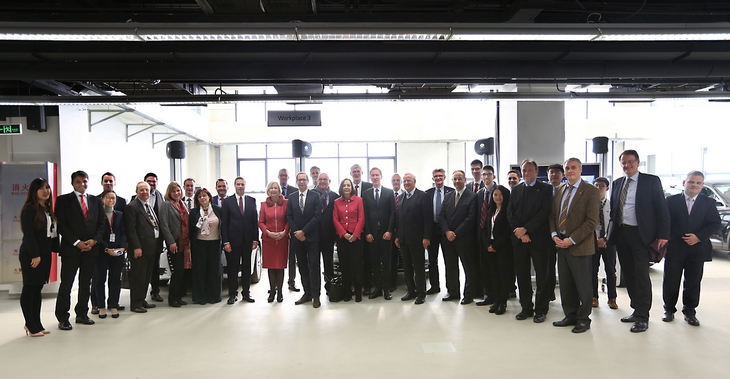 RWTH rector Ernst Schmachtenberg is currently accompanying the Federal Minister of Education and Research, Johanna Wanka, during her visit to China. Key topics of the program include the future of industry, sustainable development through clean water, electric mobility, and the development of a modern vocational training system.

In Beijing, Minister Wanka presented her Chinese counterpart, Science Minister Wan Gang, with the Knight Commander's Cross of the Order of Merit of the Federal Republic of Germany, which is awarded by the German Federal President. The Chinese Minister of Science and Technology had obtained his doctorate in Germany, where he also worked for several years. After his return to China, he strongly contributed to the establishment and further development of Germany-related institutions, programs, and academic course offerings.

In the Chinese capital, the delegation visited the Zhongguancun high-tech park, which is located in different districts of the city and hosts almost 20,000 companies. Furthermore, it visited a subsidiary of Audi AG, which established its first research and development center abroad in 2013. The center comprises all relevant R&D functions and is considered a successful example of German-Chinese research and innovation collaboration at the company level.

On January 21, Johanna Wanka will inaugurate the newly designed German Library at Tongji University, Shanghai, which is the largest German-language library in Asia. Tongji University has established more than 35 partnerships and collaborations with German universities and is thus considered the “gateway to China” for German researchers and students.

The trip of the German delegation will be concluded with a visit to the German-Chinese laser laboratory at Shanghai Jiaotong University. The laser lab celebrates its ten-year anniversary in 2016.