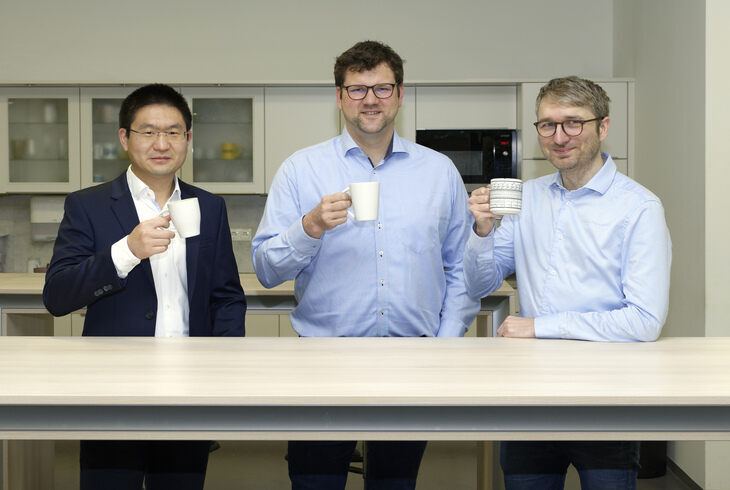 Three RWTH researchers are set to receive a prestigious ERC Starting Grant. Dr. Michael Schaub, Junior Professor for Computational Network Science at the Department of Computer Science; Dr. Christoph Kuppe, working group leader at the Institute of Experimental Medicine and Systems Biology; and Dr. Yang Shi, group leader at the Institute of Experimental Molecular Imaging, will obtain project funding from the European Reseach Council in the amount of approximately 1.5 million Euros each over a period of five years.

Complex networks are omnipresent in our world – just think of networked systems like the Internet, neural networks in the brain, or social networks. From both theoretical and practical perspectives, much of Professor Michael Schaub's research investigates the interplay between structure and dynamic processes that take place in a network. To this end, his research group combines data- and model-based methods from fields such as machine learning and dynamical systems theory. Schaub's successful proposal “HIGH-HOPeS – Higher-Order Hodge Laplacians for Processing of Multiway Signals” aims to develop efficient methods to better understand relations between multiple nodes.

Michael Schaub joined RWTH in 2020 as a tenure-track junior professor with funding from the NRW Returning Scholars Program and established a junior research group in the field of Computational Network Science at the Department of Computer Science.

Kidney disease, especially when caused by diabetes mellitus, also known as diabetic nephropathy, is a growing problem for healthcare systems worldwide. In the project “Decoding Diabetic Kidney Disease – DECODE-DKD”, which receives funding from the European Union, Dr. Christoph Kuppe and his team are investigating new pathophysiological principles to better understand the disease mechanisms of diabetic nephropathy. The aim is to use new patient-centered methods to develop new therapies. In a first step, a "map" of regulatory gene changes will be generated for each cell of the kidney to gain a better understanding of pathophysiological changes. In addition, these data will be used to better predict a patient’s disease course. With the ultimate aim of developing new medication, “mini kidneys” (3D cell culture models) based on human stem cells are being used.

Kuppe studied medicine and completed his doctorate at RWTH’s Faculty of Medicine. Subsequently, he completed a residency program in internal medicine and nephrology at Uniklinik RWTH Aachen and obtained a Master of Health and Business Administration, MHBA, from the University of Erlangen-Nuremberg. As a postdoc, he conducted research at the German Cancer Research Center in Heidelberg and at Erasmus University Rotterdam. Kuppe is a research group leader at the Institute of Experimental Internal Medicine and Systems Biology and a senior physician at the Department of Nephrology of Uniklinik RWTH Aachen’s Medical Clinic II.

Immunotherapy has significantly advanced the treatment of cancer. However, cancer can only be fully cured in a fraction of patients. Since 2016, Dr. Yang Shi and his research group have focused on developing polymeric therapeutic systems to make cancer immunotherapy more effective for more people with the disease. To this end, the group has already developed several biomaterials-based strategies to stimulate cancer immunity by activating so-called antigen-presenting cells and T cells.

With the BeaT-IT project, funded by the Starting Grant, Yang's group will use novel polymer biomaterials from the nanoscale to the macroscale to enhance cancer immunotherapy. The project aims to gain a better understanding of how B cells, which are responsible for the formation of antibodies, can be modulated and used in cancer immunotherapy.

Dr. Yang Shi joined RWTH in 2016 and established the Polymer Therapeutics Research Group at the Institute for Experimental Molecular Imaging and the Helmholtz Institute for Biomedical Engineering. He received his doctorate from Utrecht University in 2014 and was subsequently appointed associate professor at South China University of Technology. He has already received funding from the German Research Foundation as a principal investigator and has received awards such as the Theodore von Kármán Fellowship.