You Are Here: In Profile: Hans Peter Stihl 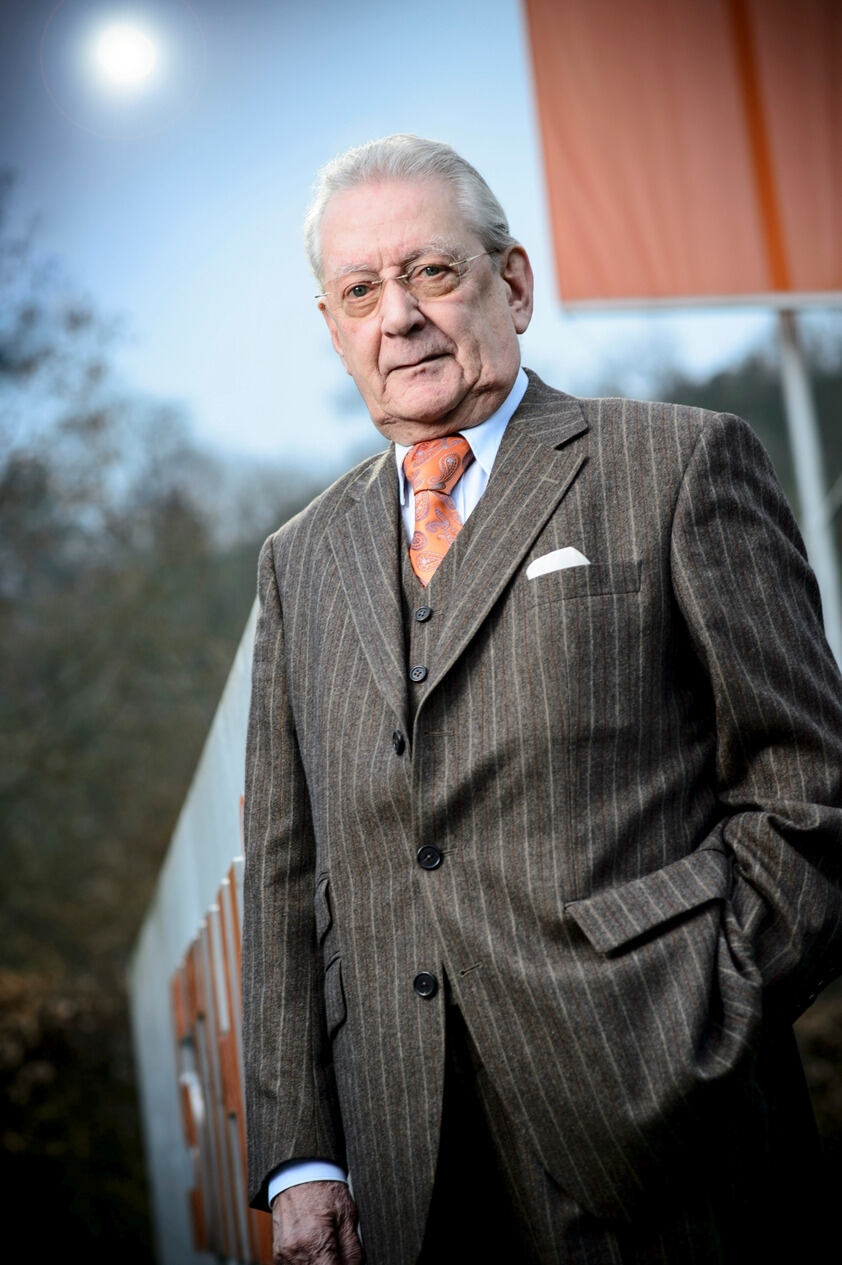 The Entrepreneur Is Still Fascinated by Chain Saws

Hans Peter Stihl developed the family company STIHL from the Swabian area in south-western Germany into an important global player. He will receive this year’s Aachen Engineering Award in recognition of his entrepreneurial lifework, power of innovation, and social commitment.

When a tree on the family's property near the Swiss border has to be chopped down, Hans Peter Stihl still does the job himself. The 87-year-old dons his protective gear, grabs a battery-powered chain saw and performs the task with the routine of a lifelong enthusiast. His father Andreas Stihl founded an engineering office in 1926 and developed chains saws that were intended to revolutionize forestry work. The office soon became an impressive machine factory. Together with sister Eva Mayr-Stihl and his brother Dr. Rüdiger Stihl, Hans Peter Stihl developed the company into an important global player, with STIHL now being the world's best-selling chainsaw brand since 1971. Hans Peter Stihl, born April 18, 1932 in Stuttgart, joined the family business in 1960 and went on to become its managing director in 1973. “The Lord of the Chain Saws”, as German business newspaper Handelsblatt named him on his 85th birthday, will now receive the Aachen Engineering Award.

He completed his degree in mechanical engineering at the polytechnic Hochschule für Technik Stuttgart in 1957 and initially worked as a design engineer at Robert Bosch GmbH. Shortly after joining his family business, he became head of the Production and Design Department – a logical step, since he had already spent a lot of time there as a child. “I kept people from getting on with their work on a fair few occasions,” he laughs. His enthusiasm for chain began at an early age and has never waned since. “The fact that huge tree trunks can be chopped down within a few seconds by a small gas engine, guide bar, and a cutting chain has always fascinated me,” he explains. Even though STIHL is much more than chain saws: “They are still my favorite product and are of vital significance for our company,” he emphasizes.

When Stihl took over the family business following his father’s death in 1973, the company employed 2,500 people and was operating from four production plants in Germany, generating an annual turnover of roughly 327 million euros in today’s money. Today, STIHL produces in seven countries around the world and employs more than 17,000 people. In total, it sells its products in over 160 countries via 38 of its own marketing and sales companies, around 120 importers, and more than 50,000 specialist dealers. The Group recorded a turnover of 3.78 billion euros for the 2018 financial year – a clear sign that it is a global player.

On Friday, September 13, 2019, RWTH and the City of Aachen will award Hans Peter Stihl the Aachen Engineering Award in honor of his lifework in a special ceremony at Aachen City Hall. On Saturday, September 14, 2019, Stihl will then give the keynote speech in front of around 5,000 participants at RWTH’s Graduate Celebration at the dressage stadium of the Aachen-Laurensberger Rennverein in the Soers district of Aachen.

The Association of German Engineers – VDI is supporting the award and has sponsored the “Kreuzende Ellipsen” sculpture by artist Mariana Castillo Deball, which is awarded to each prizewinner. In accordance with the statute, the award honors a prominent person whose work has significantly contributed to a positive perception or the further development of engineering.

The Aachen Engineering Award was not only created with the intention of promoting engineering achievements, but also of highlighting how the prizewinners succeeded in giving social or economic impetus and inspiring younger generations. Previous prizewinner Berthold Leibinger, who died in 2018, turned Trumpf, a small machine factory in the Swabian area of Germany, into a high-tech laser technology company. Other awardees were Franz F. Pischinger, an RWTH professor who founded FEV Motorentechnik GmbH as a spin-off in Aachen, astronaut Thomas Reiter, Professor Manfred Weck, the long-standing director of WZL Laboratory for Machine Tools and Production Engineering at RWTH, and Microbiology Professor Emmanuelle Charpentier, who received the award last year. This honored her work and in particular, her discovery CRISPR-Cas9, which has fundamentally changed the world of biotechnology.

"We are honoring Hans Peter Stihl with the 2019 Aachen Engineering Award for his entrepreneurial lifework, which combines the power of innovation in engineering with economic success and long-term social commitment. He thus gave considerable impetus to technology, economy, and society", explains Professor Ulrich Rüdiger, Rector of RWTH Aachen University. "He particularly stands out for his great social and environmental responsibility. He represents fair and cooperative partnerships and sustainable management in many areas."

He Established the Company Internationally

When Hans Peter Stihl took over the family business, he had a clear goal in mind for its future – turning it into an international company. "We would not have been able to compete on the global market if we had only been producing in Germany," he explains. When import bans were imposed in Brazil in the 1960s, he looked for a local site for his own production facility. In 1973, a company opened near Porto Alegre, in the south of Brazil, and become an important part of the STIHL Group. Today it produces cylinders for STIHL engines.

Saw chain production was relocated to Switzerland in 1974, followed by the all-important step to the US, which is still the Group’s largest market and houses its largest plant. STIHL does however have eight plants headquartered in Germany, in a city called Waiblingen, in the Stuttgart area. "As an entrepreneur, you have to deal with global sales markets. We are extremely proud that we succeeded in this early on and that we were also able to gain a foothold in the tough Asian market," says Stihl.

In 2002, he withdrew as managing director and become chair of the advisory board and supervisory board – positions his son Dr. Nikolas Stihl took on ten years later. Today, Hans Peter Stihl is honorary chair of both boards and personally liable partner of STIHL Holding AG & Co. KG.

The prizewinner worked in different functions in the family business for more than 40 years and shared an office with sister Eva Mayr-Stihl for over 50. The passionate motorcyclist is still there regularly and likes to eat in the cafeteria with his siblings and other family members – especially when they are serving his favorite regional dish of spätzle, which is a traditional egg pasta from the Swabian area of Germany, together with lentils and sausages. When new products have to be tested, Hans Peter Stihl often does it himself. For example the series-produced MS 500i with injection technology – the world's first chain saw to feature electronically controlled fuel injection. "I still attend important technical meetings today. I still have an engineer's perspective, which is crucial for innovations," he says.

During his DIHK presidency, Stihl considerably expanded the network of chambers of commerce and industry abroad and was involved in establishing chambers of commerce and industry in the former East Germany following German reunification. He is still involved in DIHK, now in the Council of Elders, which he even chaired until 2009. Further, Stihl was a member of the Senate of the Fraunhofer-Gesellschaft from 1992 to 1997. He also served on supervisory and advisory boards for many different organizations. He is a member of the Max Planck Society, the Board of Trustees of the Stuttgart Chamber Orchestra, the Friends of the Goethe-Institut, the Schiller National Museum, and the German Literature Archive. In 1960 Stihl became a member of the children’s village Albert-Schweitzer-Kinderdorf e. V. in Waldenburg, and in March 2013 an honorary member. He regularly supports the children’s village with donations. And these are just a few examples of his commitments. "I have always had a very strict schedule, which made all this possible for me," he says.

Hans Peter Stihl, part of the Hall of Fame of German Family Businesses since 2015, sees himself as a strict advocate of the Erhard-style social market economy, which aims for the greatest possible prosperity with the best possible social protection. From 1980 to 1988, he was Chair of the Association of the Metal Industry in Baden-Württemberg. He was in charge when the workforce was locked out for seven weeks due to industrial action in 1984. In the end, they negotiated a compromise that allowed more flexible working hours, resulting in line employees at STIHL working 37 hours a week and engineers 40 hours.

Apropos workforce: Stihl introduced an employee equity participation scheme in his company, which 80 percent of his employees participate in. He thinks it is important to talk about such topics. "In my opinion, entrepreneurs not only have an obligation towards their property, but must also ensure greater awareness in society and should therefore be involved in social action," he explains.

Hans Peter Stihl has already received many different accolades, including the Grand Cross of Merit of Germany With Star in 2002, the Grand Decoration of Honor in Gold with the Star of the Republic of Austria, and the Order of the Cross of Terra Mariana, Second Class from the Republic of Estonia. Further, he received the Economic Medal in 1995, the Medal of Merit of the State of Baden-Württemberg in 2001, the Great Staufer Medal in Gold in 2007, and the Order of Merit of the State of Rhineland-Palatinate as early as 1987. Finally, in 2001 he was honored by the Central Association of German Crafts with the Gold Crafts Mark and by the German-Brazilian Chamber of Commerce and Industry with the German-Brazilian Personality Award.