You Are Here: In Profile: Sebastian Thrun

A Fan of Progress 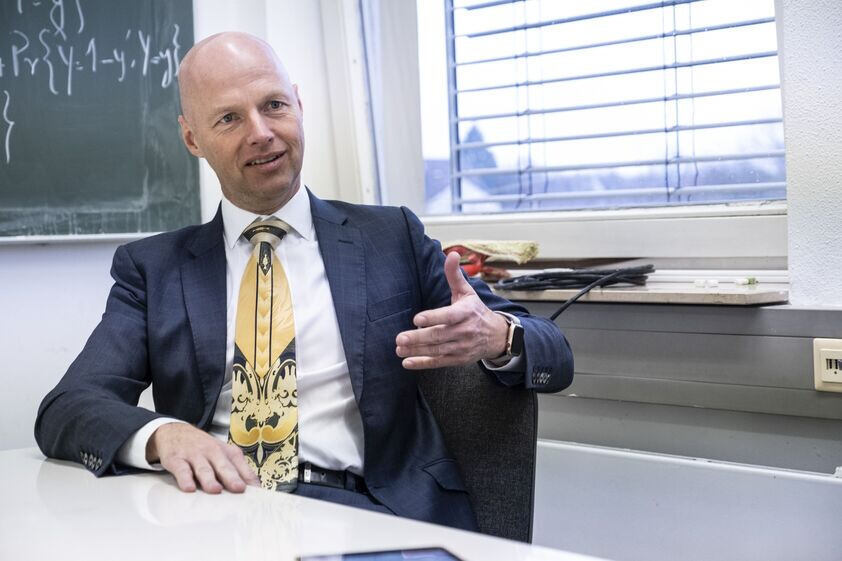 Copyright: © Daniel Kunzfeld Sebastian Thrun is a professor at Stanford, was responsible for groundbreaking projects at Google, and founded an online academy. The German AI expert will now receive the Aachen Engineering Award for his visionary work.

“A man who lives and breathes technology.” This is how the German newspaper Die Welt described Professor Sebastian Thrun at the beginning of the year. Thrun knows that there are many such descriptions of him out there. There are many good reasons why the FAZ newspaper calls him the “pioneer of the self-driving car” and the NDR “broadcaster the inventor of the autonomous vehicle,” and the Handelsblatt newspaper writes about the “high-tech pioneer.” In fact, the 53-year-old from Solingen stands for technological progress like no other, keeping in mind that for him, technology is always a means to an end. “I am a great fan of technological advancement. For me, technology is a tool. We have knives and forks to eat our food, and we have a computer to communicate better, make better decisions, and impart knowledge better,” he says.

After studying at the universities of Hildesheim and Bonn, the expert in artificial intelligence decided to move to the United States. There he started his career in 1998 as Assistant Professor at Carnegie Mellon University in Pittsburgh, Pennsylvania, where he met Professor Tom Mitchell, a top researcher in the field of machine learning. Mitchell became Sebastian Thrun’s mentor and inspired him in many ways. In 2003, Thrun moved to California - to take on the position of Associate Professor and later Full Professor at Stanford University as well as Head of the University's Artificial Intelligence Lab. There, he quickly found himself in the spotlight when he won a major competition for self-driving cars with the Stanford Racing Team in 2005. The young German computer scientist had hardly arrived in the Valley when he received an email. The sender was Google co-founder Larry Page. He had heard about Sebastian Thrun and was eager to show him a robot. They met and afterward stayed in touch. Eventually, in 2011, Thrun went to work for Google. Today he and Larry Page are good friends.

During his time at Google, Thrun launched the research laboratory “Google X,” the mega company's future factory, so to speak, which was responsible for projects such as “Google Street View” and the smart glasses “Google Glass.” All good reasons for the words typically used in newspaper reports about Thrun. Or as the FAZ newspaper so aptly summarizes it: “Those who don't know Sebastian Thrun have missed how relevant Germans can be for our lives in the future.” On Friday, September 4, the computer scientist will be awarded the Aachen Engineering Award in Aachen City Hall’s Coronation Hall.

Professor Thrun follows in the footsteps of last year’s winner, Hans Peter Stihl. The first prizewinner Berthold Leibinger, who died in 2018, turned Trumpf, a small machine factory in the Swabian area of Germany, into a high-tech laser technology company. Other awardees were Franz F. Pischinger, an RWTH professor who founded FEV Motorentechnik GmbH as a spin-off in Aachen, astronaut Thomas Reiter, Professor Manfred Weck, the long-standing director of WZL Laboratory for Machine Tools Production Engineering at RWTH, and Microbiology Professor Emmanuelle Charpentier, who fundamentally changed the world of biotechnology through her groundbreaking research on the CRISPR-Cas9 genome editing technology. Jointly awarded by the city of Aachen and RWTH Aachen University, the award is generously supported by the Association of German Engineers VDI. The association is sponsoring the “Kreuzende Ellipsen” sculpture by artist Mariana Castillo Deball, which will be awarded to the prize winner at the festive ceremony at Aachen City Hall.

All the prize winners have distinguished themselves through their meaningful contributions to society and industry as well as their ability to inspire the younger generations. “Sebastian Thrun is a world-renowned technology trailblazer. The German-born computer scientist embodies digital progress like no one else and has been providing groundbreaking impetus to research in the fields of artificial intelligence, autonomous driving, and the digital transformation of higher education for more than 20 years,” says Professor Ulrich Rüdiger, Rector of RWTH Aachen University, explaining the decision.

Thrun wants to inspire others. “I like to motivate young people. Sometimes you just have to take a risk in life, dare to do something. Naturally, people can be very afraid to stick their neck out, however. If I am given the chance, I definitely like to try and influence people in a positive way,” he says. For him, technology is the tool with which people can shape the future. “I am excited about what we in society can achieve with technology - and have already achieved. I always like to look at the big picture. 500 years ago there were many wars in Europe, people were enslaved and lived in extreme poverty. And today? We have peace and we eat too much rather than not enough; most people are educated, or at least they can read and write. Also, we live twice as long - all because of technological progress,” he explains.

Always shining through in his words is the optimism that Sebastian Thrun is known for. An optimism he would like to share on the occasion of the award ceremony. “I am very honored by this great distinction. Germany is a really powerful country. It was here that the automobile was invented, the letterpress, the motorized aircraft - and it is still a country of inventors today. Germans can really take some pride in that. But I also have to say that Germany always tends to be a bit too pessimistic for me. That is why I am so excited to help people – especially young people – see what is possible. And I want to bring the optimism I’ve experienced in Silicon Valley back to Germany,” he says.

Sebastian Thrun will not (yet) come to the award ceremony by air taxi. Even though he has built more than 150 prototypes and completed 26,000 test flights with his company, Kitty Hawk Corporation that he co-founded with Larry Page. An air taxi may still sound like a pipe dream. But Thrun is a person who can make dreams and visions a reality. And he has an idea where such an air taxi should and will land one day: his front yard. He emphasizes, though, that his projects are not about making wealthy managers more comfortable, but that they are meant to benefit everybody. “In the end, it must be about making life better for everyone. That must be the big common goal,” emphasizes Thrun.

At the core of his visions for the future: Artificial Intelligence. Thrun, who as a teenager spent spent many hours writing programs on a department store's exhibition computer, discovered artificial intelligence as his major interest during his basic studies in computer science. And he stayed true to it. Today his visions for the future are also based on it. “I believe that technology will act as a great equalizer. In 30 years, all the basic needs we have, we’ll be able to attain virtually free of charge. Health care and food will hardly cost anything and we will all have housing. Clothing will be virtually free, education will be free, getting from A to B will be extremely cheap – and everything will be available to everyone. Extreme poverty will have completely disappeared by the mid-2040s – worldwide. 100 years ago, that was unthinkable.”

The End of Repetitive Work

Yes, the world is going to change. In small steps, according to Thrun. “Any kind of repetitive work will be done by computers in a few years time. Computers are already better at driving cars and piloting aircraft than us humans. In medical diagnostics, there are examples where computer systems can identify cancer in a patient better than the best doctors.” Thrun could even imagine wearing a chip in his brain if it could help identify serious diseases at an early stage.

He points out that this will not be the first game changer for humankind: “500 years ago, we all worked in agriculture. By inventing machines, we have managed to have only one percent of all people in Germany working in agriculture today whereas almost everyone else has jobs that we have newly created. Of course, many people find this hard to truly believe, but technological transformation is undoubtedly happening and is becoming more and more dynamic. In 2007, we didn’t really take the smartphone seriously. First, it hardly sold at all, but then it sold increasingly well. Find someone today who doesn't have a smartphone. There's hardly anyone left. And this all happened within a little more than ten years. That's incredibly fast,” Thrun says. In his eyes, the future has already begun.

The foundation for it all is education, which is why, in 2012, he founded the globally active online academy Udacity to spread knowledge more widely than ever before. In 2011, as a Stanford professor, he opened a lecture on artificial intelligence (Introduction to Artificial Intelligence) to participants worldwide, only charging a symbolic fee – and suddenly there were 160,000 registrations. That showed him what was possible. Today he says: “If we bring world-class education – Stanford level or Aachen level – to the whole world, we can double the gross national product.”

There it is again, the Thrun optimism and his courage to tackle matters head-on. “One of my rules is: I am allowed to make any mistake, but only once, never twice. That's my basic rule. If I make a mistake and learn from it, then that's okay,” he says. As a professor, as Google Executive Vice President, and as an entrepreneur, he has lived by this maxim.

What's next? In the United States, people tend to have an average of seven different careers over the course of their lives. So Thrun apparently has four more to go. He has certainly got plenty of ideas. He has been meeting with Larry Page a lot lately and they have been talking about new projects. “What impresses me about the Silicon Valley mindset is that people here think very differently. They are willing to really question everything,” says Thrun. “There are two ways of thinking: analog and logical thinking. Analog thinking is the rule. We wear shirts and pants because that’s what men wear, not because pants provide better protection against the cold than skirts. But when I think purely logically, I arrive at completely new solutions. Albert Einstein did not develop the theory of relativity because he thought like the people before him.” So we can certainly expect him to tackle new projects in the future. Soon. And when he talks about it, he actually seems to live and breathe it. About how technology can make the world a better place.