You Are Here: Ulrich Thiele Made Honorary Citizen of RWTH

The entrepreneuer from Iserlohn has maintained a special relationship with the University, providing ideas and financial support for over many years. 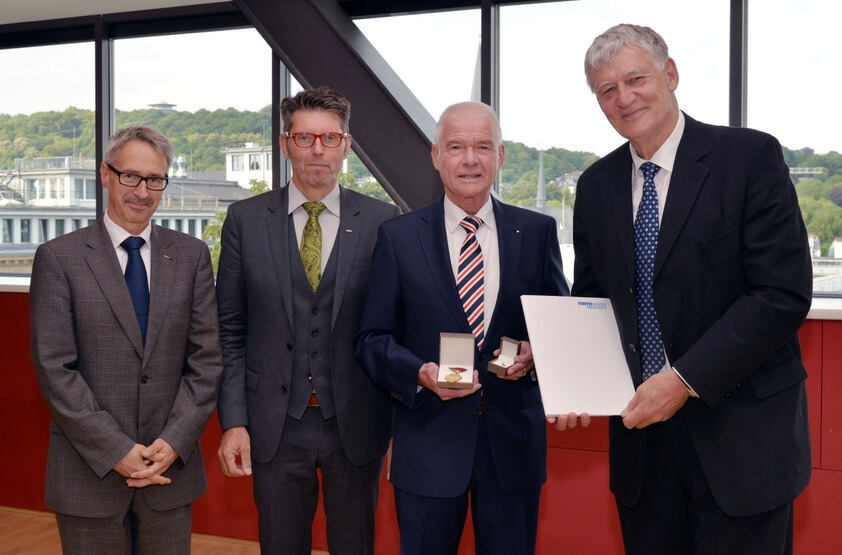 RWTH has honored Ulrich Thiele as an honorary citizen. "Ulrich Thiele is been a dedicated supporter of the Aachen university for many years. With his support, he has significantly contributing to improving conditions for students and enriching research activities," explained Axel Preuße, dean of the Faculty of Georesources and Materials Engineering. "This honor is extraordinarily special to me. I view it as recognition and respect for my life's work, which led me down the path of entrepreneurial responsibility early on. As a mid-sized company, I have experienced a few dramatic but also many successful years," says 70-year-old Thiele.

Thiele studied mechanical engineering with a focus on production technology at RWTH. Due to his father's premature death, he assumed responsibility for Thiele OHG and its sister company Kettenwerk Schlieper Gmbh at the young age of 27. He has been the sole managing director of Schlieper since 1998. He expanded Thiele GmbH & Co KG, located in Iserlohn, with great enthusiasm and dedication. The company grew into a modern mid-sized company with roughly 500 employees. Subsidiaries were founded in Pittsburgh in the USA and Taiyuan, China. Today, the company is a leader in the world market for chain systems to promote and transport raw materials in mining.

The company Thiele has been a supporter of RWTH since the 1960s, with initiatives then headed by his father, August Thiele. It has demonstrated its supported in numerous ways over the years. Research contracts in the field of chain systems in extraction technology, production, and operational organization have been elements of the fruitful collaboration. The non-profit Ulrich Thiele Foundation has endowed the "advanced mining professorship" since 2015, which is currently held by Dr. Karl Nienhaus. It is particularly dedicated to the development of sensors and autonomous systems in raw materials extraction while adhering to the principles of digital mining. Additionally, numerous student excursions have been financed, allowing students a valuable look into international mining.

"I always remained in touch with my alma mater after graduating. Due, in part, to this collaboration, our company has been able to develop its techniques and technologies and become a world leader. The university offers a challenging academic education and I'm proud to call it an elite university. The professors are outstanding experts and the institution maintains intensive and close contact with industry. If I had to choose where to complete my education today, I would pick the same path," emphasized the new honorary citizen.