David Fabry was awarded the Carl Roth Funding Award of Gesellschaft Deutscher Chemiker, GDCh, on Thursday at the Young Chemists' Forum's spring meeting in Kiel. The 29-year-old, who is conducting his doctoral studies at the RWTH Institute of Organic Chemistry, was honored for his comprehensive and innovative work on photoredox catalysis, particularly the development of an innovative oxidative C-H activation through the use of visible light. 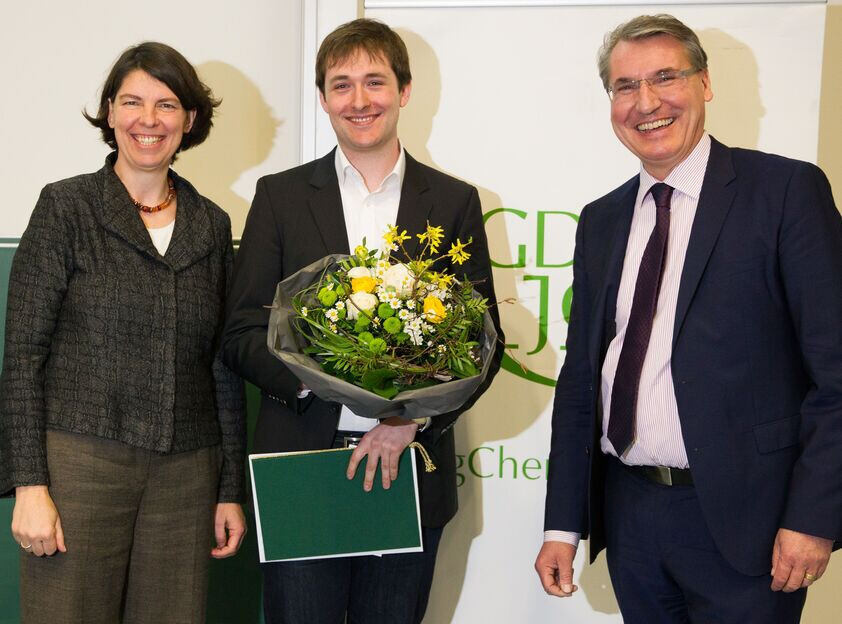 Photocatalysis uses light to initiate chemical reactions. The use of high-energy radiation, usually UV light, has been well-known for a long time. Fabry, however, uses visible light like household lamps or the sun in his research, to instigate a chemical reaction. Visible light has less energy and is thus more resource-efficient and sustainable than UV light. "Because UV light is very high in energy, unwanted side reactions often occur when molecules are irradiated, whereas visible light is less aggressive and always available," explains David Fabry. C-H activations are reactions, during which a carbon-hydrogen bond is split into organic molecules with the use of transition metals. The method is considered a promising possibility to turn simple substances into valuable, functionalized intermediate products and to use natural resources more efficiently. David Fabry added dye to the reactions of the combination of photoredox catalysis and C-H activation. The dye only absorbs the visible light with minor energy. The goal: to facilitate targeted energy or electron transfers from the dye to the target molecules. "Until now, copper salts were used. Now the dyes are used instead to act as catalysts," says the 29-year-old. The new, combined catalysis system makes it possible to forego additional chemicals. Waste and expensive accessory agents are avoided. "Reactions in materials science and the pharmaceutical industry, such as the production of medications, can now be shaped more efficiently and sustainably," explains the scientist.

David Fabry, born in Neuss, studied chemistry at RWTH Aachen. He completed his Master's studies with honors. He has already conducted research at Oxford University as a guest researcher. He received a full grant from the German Academic Exchange Service to conduct a stay in the USA at the Scripps Research Institute in La Jolla, California. Fabry has produced eleven publications, four of which he wrote during his Master's studies.

The GDCh awards the Carl Roth Funding Award, endowed with 5000 Euros, to young chemists, who develop resource-efficient systhesis routes or use chemicals in an innovative way. The award is financed by Carl Roth GmbH. The company, which sells lab equipment as well as selected products for life sciences and chemicals, contributes an additional 3000 Euros in the shape of a gift certificate, which the award recipient can use at Carl Roth.