You Are Here: AMS Installed and Ready for Operation

AMS Installed and Ready for Operation

The operation required high-precision work on the part of the Endeavour astronauts: in a four-hour procedure on May 19, the Alpha Magnetic Spectrometer (AMS) was moved out of the shuttle's payload bay and delivered to its permanent position on the International Space Station's starboard truss. From there, the 7-ton instrument will provide precise data on cosmic radiation and help to unravel the mysteries of antimatter and dark matter in the universe. 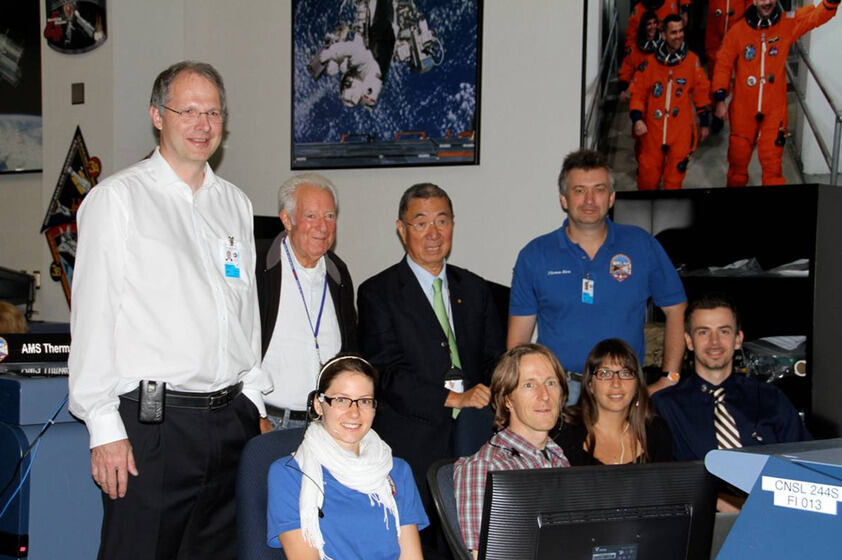 "We are delighted that the AMS has survived the ride intact and that we are already receiving data from it", says Professor Stefan Schael, Chair of Experimental Physics at RWTH Aachen University. The physicist coordinates the activities of the team of German scientists currently working at the Johnson Space Center in Houston, USA to prepare the AMS for operation in space.

It took an entire day for the international team, which includes researchers from Aachen and Karlsruhe, to activate the AMS and boot up its 650 computers. In subsequent test runs, the team made sure that the instrument has survived the launch and is fully operational.

Having activated the spectrometer's detectors, the main task will now be to adjust the 300,000 aerials, which make it possible to receive high-quality data on cosmic radiation – soon, the spectrometer will be collecting about 2,000 events per second and relay the images to the ground centres in Houston and Geneva.

Before relocating to CERN, Geneva, the Aachen researchers will stay in Houston for about one year to work on the analysis of AMS data.

"The AMS is a decidedly long-term project in fundamental research," explains Prof. Schael. "It will take us years to bring in the scientific harvest of this experiment. But we look forward to gaining fundamental insight into the composition of the universe, which still presents many mysteries, such as the nature of dark matter."