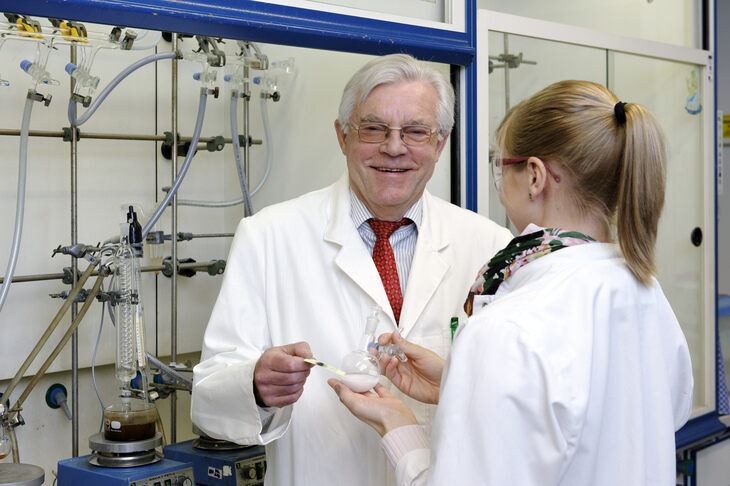 With the Karl Ziegler Guest Professorship, the Max Planck Institute for Coal Research honors Enders’ outstanding work in the fields of Asymmetric Synthesis and Catalysis. Enders studied at the University of Gießen and also earned his doctorate there. He has been professor in Aachen since 1985 and he worked as professor in Bonn for five years before that. Since 2008 he has been a member of the senate of the German Research Foundation.

The research interests of Professor Dieter Enders and his roughly 30 coworkers are focused on the general area of organic synthesis. For Enders it is important that his achievements are applicable in the synthesis of natural products or active agents for pharmaceuticals. “The development of new drugs that attack the underlying causes for illnesses is one of the big challenges for chemistry nowadays”, says Professor Enders. He has already received many prizes, for example the Leibniz Preis of the DFG or the Max Planck Forschungspreis for Chemistry.

Enders loves soccer, from Champions League to non-league, French Chansons and he loves hiking with his wife. And although he likes to play tennis very much his true passion is chemistry. “In chemistry, more than in many other sciences, you can develop your own field of research”, he explains. "Young chemists should be excited about their profession, engaged and they should have power of endurance."

The Karl Ziegler Guest Professorship is named after Karl Ziegler, chemist, and Nobel prize winner in 1963. Ziegler was also an enthusiastic art collector and Director of the Institute for Coal Research. He would have turned 80 on November 26, 1978.

Karl Ziegler’s wife Maria and his daughter Dr. Marianne Witte initiated this event in 1978 in order to commemorate Karl Ziegler and to honour outstanding scientists and give them the opportunity to hold talks at the institute. Since then more than 20 researchers have visited the Max Planck Institute for Coal Research as Karl Ziegler Guest Professors.

Partial translation from the Max Planck Institute for Coal Research