You Are Here: Hope for Patients Suffering from Schizophrenia

Hope for Patients Suffering from Schizophrenia

Around 800,000 individuals in German suffer from schizophrenia. The disorder, however, is not as well-researched as are depression and dementia. A new large-scale research project seeks to address this desideratum in research. 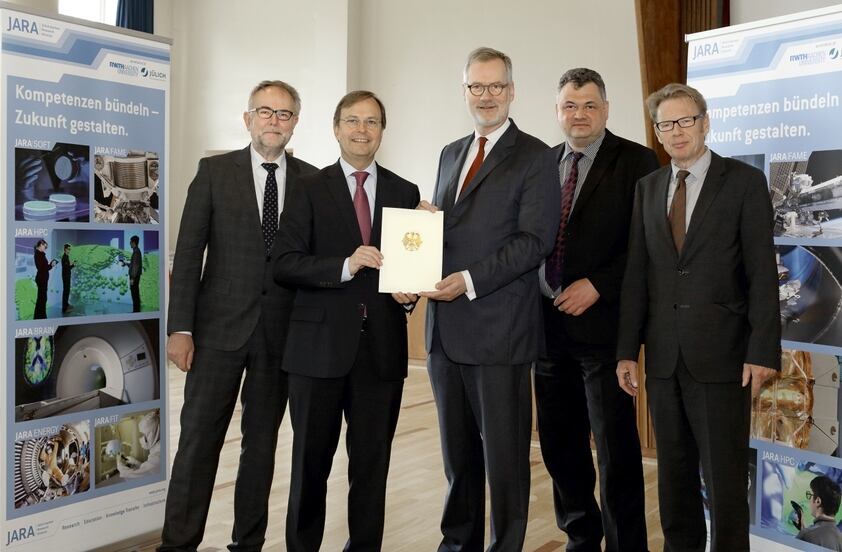 On May 12, Parliamentary Secretary of State Thomas Rachel and representatives from the JARA-BRAIN brain research alliance launched the research project “ APIC – Antipsychotic-Induced Structural and Functional Changes in the Brain" at the LVR Clinic in Düren. The Federal Ministry of Education and Research contributes four million Euros in funding for the project.

Psychiatric and neurological disorders are widespread; statistially, more than 40 percent of all people in Germany suffer from such a disorder once in their lifetime. Now the Federal Ministry of Education and Research has launched a research initiative in order to develop concepts for the successful prevention, diagnosis and treatment of psychological disorders. As Thomas Rachel explains, “by collaborating in the initiative, the project partners seek to significantly improve the quality of life of patients and of their dependents.”

One of the researcher partners is RWTH Aachen. Chancellor Manfred Nettekoven emphasized the significance of the project for RWTH and University Hospital Aachen: „RWTH Aachen has recognized the societal relevance of neuropsychiatric questions and problems; these form one of the medical key research areas of the University.”

Investigating Changes in the Brain

According to current research, several factors interact in the genesis of schizophrenia, such as genetics, environmental factors, and biographical experiences, says Professor Frank Schneider, director of the Department of Psychiatry, Psychotherapy and Psychosomatics at University Hospital Aachen, which coordinates the schizophrenia research project. The symptoms of the disorder are as manifold as are the causes, including nervousness, irritability, anxiety, and psychotic symptoms such as hearing voices and paranoia.

At Forschungszentrum Jülich, JARA-BRAIN neuroscientists have been working for several years on the causes of and therapeutic methods for psychic disorders. As part of APIC, they will compare the modifications that occur in the brain with different forms of treatment as well as the effectiveness of each treatment.

Schizophrenia treatment includes a targeted combination of drugs, psychotherapy, and other therapeutic methods. Importantly, certain areas of the brain of schizophrenia patients are different from those of healthy people. Within APIC, the researchers will use state-of-the-art imaging techniques to investigate the changes in the brain under medication.

Furthermore, in another subproject, schizophrenia will in addition be subject to innovative forms treatment such as neuro-feedback: with the help of training sessions in the MRT scanner, patients learn to control processes in the brain, e.g. those that cause the hearing of voices.