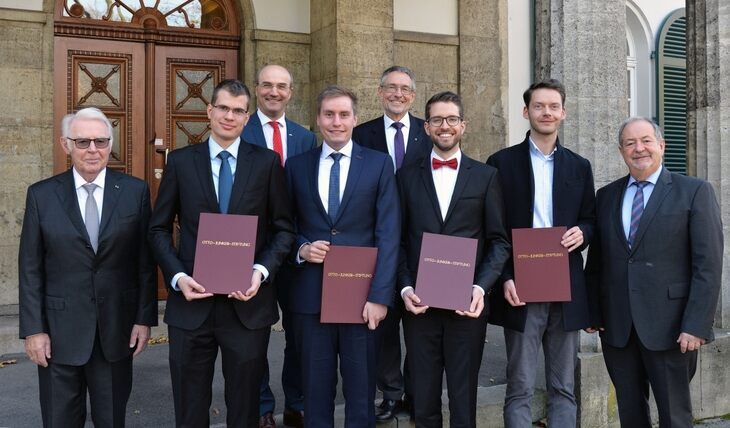 Dominik Büschgens completed his Abitur at the Franz-Meyers-Gymnasium in Mönchengladbach and studied Materials Engineering. The 27-year old early-career researcher has already received multiple awards: For instance, he was awarded the Springorum medal by the friends and sponsors of proRWTH for completing his Master's thesis with distinction and he also received the 2012 ThyssenKrupp Award. Furthermore, he was the beneficiary of a ThyssenKrupp Steel Europe AG scholarship and remained on his Faculty's Dean's list from 2011 to 2016. Since May 2017 he has been working as a scientific employee at the Department for Industrial Furnaces and Heat Engineering while completing his doctoral studies.

Maximilian Rudack, born July 1992, completed his Abitur at the Einhard-Gymnasium in Aachen. He went on to study Materials Engineering with a specialization in casting at the RWTH Foundry Institute. For his Master's thesis, completed with distinction, he was awarded the Springorum Medal by the friends and sponsors of proRWTH and also received a Deutschland scholarship by the Federal Ministry of Education and Research

Veit Langrock studied Electrical Engineering, Information Technology and Computer Engineering with specialization in Micro and Nanoelectronics. In December of 2017, he concluded his studies with his Master's thesis on "Numerical and theoretical investigation of long-range coherent electron shuttling devices in Silicon-Germanium quantum wells for scalable quantum computing". Currently, Langrock is a doctoral candidates at Forschungszentrum Jülich. Langrock was awarded the Springorum Medal by the friends and sponsors of proRWTH for his Master's thesis, which he completed with distinction. He was also a committed volunteer with the German chapter of AFS intercultural programs.

Daniel Sialkowski, born January 1993 in Bochum, attended the Hildegardis-Schule in Bochum, where he also gained his Abitur certificate. In the winter semester of 2012, he began his studies in Electrical Engineering, Information Technology, and Computer Engineering, which he completed with distinction in 2018. His Master's thesis was concerned with the "support of multiple users in mm-wave cellular networks." During his studies, Sialkowski was supported through the RWTH Education Fund with with a scholarship from the German Academic Scholarship Foundation and a Germany Scholarship from the Federal Ministry of Education and Research. From 2012 to 2016 he also received funding through the RWTH Aachen Dean's List. During his studies he was involved in Engineers Without Borders, participated in the German Academic Scholarship Foundation ambassador program, and was an active member of the university chapter of the VDE e.V., one of Europe's largest technical-scientific associations. Since April 2018 he has been working as a member of the Trainee Program at Deutsche Telekom AG in the area of Board Member Support Technology and Inovation.

Werner Stegemann (front left) and Dr. Ambros Schindler (front right), both on the managing board of the Otto Junker Foundation, congratulated Daniel Sialkowski, Veit Langrock, Dominik Büschgens and Maximilian Rudack (front row, from left) on receiving the 2018 Otto Junker Awards. Sharing in the delight with the honorees are RWTH Rector Ulrich Rüdiger and Professor Wolfgang Bleck, Chair of the Otto Junker Foundation's advisory committee (back row, from left.)