You Are Here: RWTH and Forschungszentrum Jülich to Jointly Address Global Challenges

On the occasion of the opening of the JARA Center for Simulation and Data Science, JARA-CSD for short, RWTH and Forschungszentrum Jülich hosted a special event, the 2018 JARA Day. The establishment of the new center reflects the increasing significance of the simulation and data sciences in science, research and application. 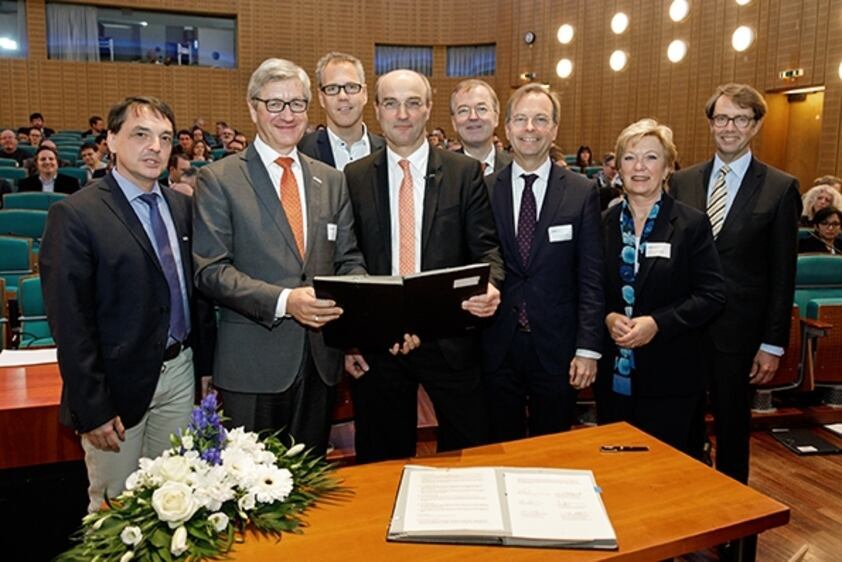 ”Focusing Expertise – Shaping the Future“: this is the motto of the Jülich Aachen Research Alliance between RWTH and Forschungszentrum Jülich. By pooling expertise in the increasingly important fields of simulation, data analysis and HPC technologies, as RWTH Rector Ulrich Rüdiger points out, the new JARA Center for Simulation and Data Science fully lives up to this motto.

As Professor Wolfgang Marquardt, Chairman of the Board of Forschungszentrum Jülich, explains, “the simulation and data sciences have become the third pillar of scientific research, alongside theory and experimentation. The new JARA-CSD is set to further advance the simulation and data sciences. Its focus is on addressing scientific questions and problems, the joint education and training of early-career researchers, and the collaboration with business and industry.”

The new center integrates facilities and capabilities of both educational and research institutions, including computer and data infrastructures, user support activities, and methodical disciplinary research in the fields of simulation, data analysis and high-performance computing.

This creates an excellent environment for research on forward-looking topics. Existing structures and institutions at both locations, such as the Center for Computational Engineering Science, the RWTH Profil Area Computational Science & Engineering, and the JARA-HPC sections will be integrated into the new Center.

High-Performance Computing in the Service of Research

Already today, the state-of-the-art supercomputing system delivers a peak performance of 20 petaflops, that is 20 billion floating point operations per second. JARA-CSD aims at further expanding and synergistically operating the computing and data infrastructures at both locations in Aachen and Jülich. Furthermore, the Center seeks to provide important contributions to solving challenges in fundamental and applied research.

As NRW State Secretary Annette Storsberg said, “The continuous advancement of high-performance and supercomputing is essential for conducting internationally competitive top-level research. The federal state of North-Rhine Westphalia has provided significant funding to establish JARA as one of the leading centers of high-performance computing in Germany and in Europe.”

Education of Experts in the Simulation and Data Sciences

JARA-CDS places great emphasis on the education of early-career researchers. For this reason, the School for Simulation and Data Science (SSD), the German Research School for Simulation Sciences (GRS), and the Aachen Institute for Advanced Study in Computational Engineering Science (AICES) graduate school have been integrated into the center. In addition, externally funded research groups such as the research training group on Modern Inverse Problems From Geometry and Data to Models and Applications (MIP) and the Helmholtz School for Data Science in Life, Earth School and Energy (HDS-LEE) contribute to JARA-CDS.

Young scientists at the JARA-DCS benefit from its international and cross-disciplinary outlook and its provision of a broad range of key qualifications.