You Are Here: Multiple Wins for Aachen and Jülich Biotechnology at iGEM Competition

Multiple Wins for Aachen and Jülich Biotechnology at iGEM Competition 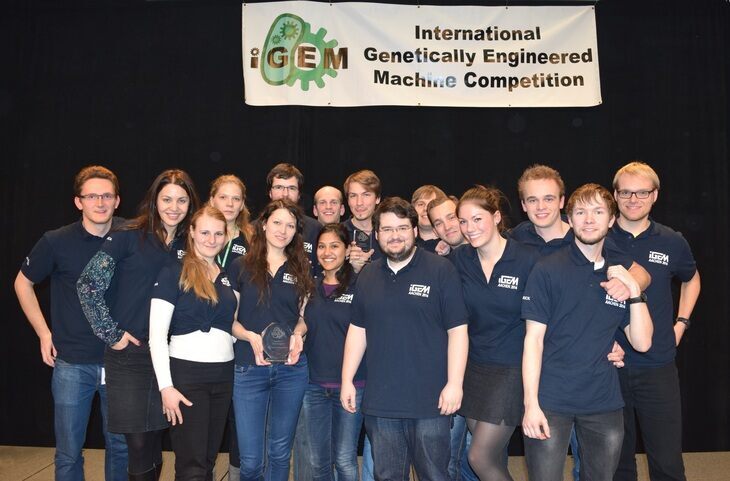 An interdisciplinary student team from RWTH Aachen won first place during its premiere participation at the iGEM competition for synthetic biology in Boston, USA. The 15 biotechnologists, supervised by RWTH and Forschungszentrum Jülich, won a first place for the best development of analytical method and received a special award for the best software and safety concept.

The team, which participated along with 245 other teams, developed special sensor bacteria and a measuring device that can be affordably manufactured that can quickly detect illness-related bacteria such as hospital bacteria at low-cost.

Professors Lars Blank and Ulrich Schwaneberg from RWTH Aachen and Professor Wolfgang Wiechert from Forschungszentrum Jülich supervised the 15-person team. The Helmholtz Association supported the project within the framework of the Synthetic Biology Helmholtz Initiative.

The iGem Competition or International Genetically Engineered Machine Competition, which has been held for ten years, is considered the linchpin of synthetic biology and the unofficial world championship among genetic engineers. Student teams compete with projects they have chosen themselves and completely independently organized, conducted, financed, and presented over six months.

"The Aachen iGEM team competed with a project that unifies the strengths of the Aachen-Jülich region in the field of biotechnology and engineering in a special way," says Professor Wolfgang Wiechert. "This great success is, if nothing else, an outstanding collaboration between Forschungszentrum Jülich and RWTH Aachen," said the head of the Jülich biotechnology department gladly.

The junior researchers developed a method to recognize and identify bacteria on solid surfaces. The 2D bio-sensor, which the group lovingly named "Cellock Holmes," aims at overcoming the drawbacks of existing methods and to develop a quicker, open source, and mobile method for detecting certain types of bacteria.

For the competition "Cellock Holmes" was biosensorically programmed to identify the pathogen psdeudomonas aeruginosa, which is known as a hospital bug, infecting patients with open wounds and immunodeficiencies.

The biotechnologists utilized the bacteria's communication processes. The team developed sensor cells, so-called cellocks, that are able to detect the native autoinducer of the bacteria and elicit a distinct fluorescence signal. The molecules are made visible with the help of WatsOn, the measurement device the team built, and Measurarty, which it developed. They succeeded in greatly reducing the sensors' reaction times in comparison to existing methods.

The method can also be adapted to the signal molecules of other types of bacteria. The team published its approach and the construction manual for the measurement device on its project website.