Alexander Leutner and Jonathan Roberz work as researchers at RWTH Aachen, but they are also entrepreneurs: they are the managing directors of the Aachen company Apodius. Their product is called the “Apodius Vision System,” an optical inspection system which is to ensure the high quality of fiber composite structures. Automakers, aerospace companies, and suppliers are already taking a strong interest in the innovative product which makes it possible to automate quality assurance in the production process. As Leutner explains: “So far, quality control managers take random samples and manually inspect individual finished components. Using our sensor technology, components can be measured more objectively, in a much more precise way.” 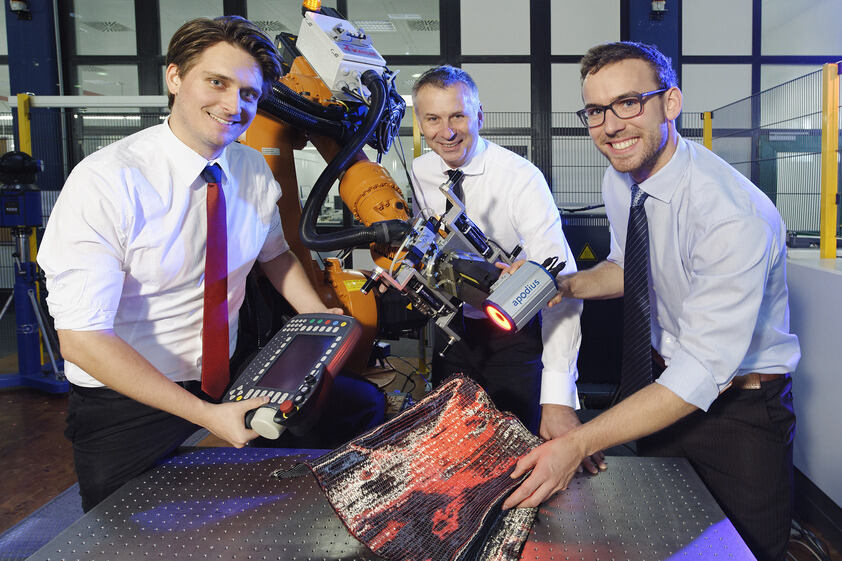 “Fiber composites are the lightweight materials of the future – due to their excellent material characteristics, they are increasingly being used in the construction of motor vehicles and aircraft,” adds his colleague Jonathan Roberz. Compared to steel and other materials, they are very light in weight and highly pliable. In the production process of three-dimensional parts, however, it is possible that forming the part may result in tension-induced fiber fractures.

“Our system detects faulty parts during the processing step, which results in reduced production costs,” explains Leutner. A sensor, mounted on the arm of a robot and integrated into the production line, measures the orientation of the individual fibers on the component surface, generates an image from the data and sends it to a computer which, using a special software application, compares the information with predefined target values. If there is a discrepancy between the actual values and the target values, the component in question will be immediately taken out of the production line, and not much later when the finished product is checked in the final inspection.

A New Company Is Born

“The development of the Apodius optical inspection system started with the Innovation Network 'FALCON Inline Inspection of Fiber-Reinforced Plastics,’” says Professor Robert Schmitt, Chair of Production Metrology and Quality Management at the RWTH Laboratory for Machine Tools and Production Engineering, WZL for short.

Under Schmitt's direction, the plans for Apodius were developed into a concrete venture concept. As part of the FALCON project, which received funding from the Federal Ministry of Education and Research, a team of students and doctoral candidates, including Leutner and Roberz, together with partners from industry and research, developed prototypes of measuring instruments for composite fibers.

The WZL’s traditionally close contacts with industry paid off once more: the partners in collaboration became the first customers of the spin-off company. In order to be able to coordinate the production and distribution of the product, it became necessary to establish the company in the winter of 2012: Apodius and the careers of Alexander Leutner and Jonathan Roberz as entrepreneurs were launched. Robert Schmitt is pleased with the formation of the company: “As university instructors we are very glad when our research is continued by spin-off companies. They are the visible fruit of successful work.”

For Schmitt, Apodius is just one example of the high degree of innovation and successful support of aspiring entrepreneurs at RWTH Aachen. Apart from technological expertise, the University offers professional support for those who want to set up a company. “RWTH has developed an integrative strategy to encourage and support potential entrepreneurs. Part of this strategy is the Entrepreneurship Center as a central point of contact. Here, interested students and researchers receive support, e.g. with creating a business plan or with dealing with financial or marketing aspects.”

The University’s support strategy also convinced the jury of the competition “EXIST Gründerkultur – Die Gründerhochschule” by the Federal Ministry of Economics and Technology: RWTH Aachen is one of the 12 German universities receiving up to 3.5 million euros within the next five years for the implementation of its entrepreneurship concept.