Professor Dieter Enders from the Institute of Organic Chemistry at RWTH Aachen University has received a prestigious ERC Advanced Grant from the European Research Council (ERC). Thus the researcher will receive funding in the amount of almost 2.5 million Euros over a five-year period. “We are very pleased that one of our highly recognized top-level researchers was awarded an Advanced Grant,” said RWTH Rector Professor Ernst Schmachtenberg. 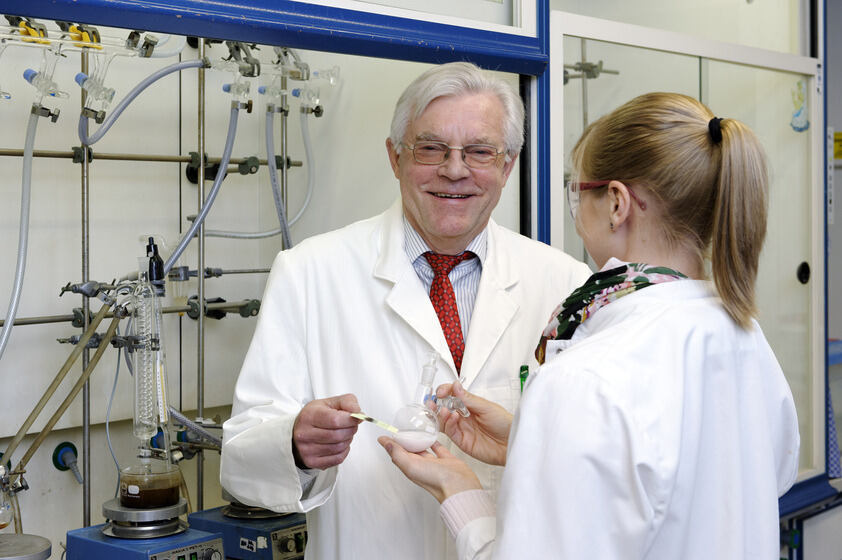 With the grant, the ERC supports Enders’s work in the field of Asymmetric Organocatalytic Domino Reactions.

Since about the turn of the millennium, the research field of organocatalysis has been developing extremely rapidly and today can be seen as the third pillar of catalysis, besides biocatalysis and metal catalysis. Its advantage is that it makes possible to use small organic molecules, such as the amino acid proline, as catalysts. If such an organocatalyst controls a consecutive series of reactions in a reaction vessel, researchers call this a cascade or domino reaction. This is very favorable, as the reactant goes through multiple transformations without isolation of intermediate products. Organocatalytic domino reactions enable a very environmentally-friendly and economically favorable method of catalysis that is currently generating high expectations in the chemical industry.

Dieter Enders has already received several prizes and awards for his pioneering work in the fields of asymmetric synthesis and organocatalysis, including the Leibniz Prize of the German Research Foundation (1993), the Jamada Prize (Japan, 1995), the Max Planck Research Prize (2000), the Emil Fischer Medal of the German Chemical Society (2002), the Arthur C. Cope Scholar Award of the American Chemical Society (2008), and the Robert Robinson Award der Royal Society of Chemistry (UK, 2010). He is a member of the German National Academy of Sciences Leopoldina and of the Senate of the German Research Foundation; also, he is editor-in-chief of the international scientific magazine Synthesis.

ERC Advanced Grants are intended to support the very best research to be conducted in EU member states and associated countries. They are to allow exceptional, established leaders in research to pursue ground-breaking, high-risk projects that open new directions in their respective research fields.