You Are Here: The Search for Extraterrestrial Life

The Search for Extraterrestrial Life 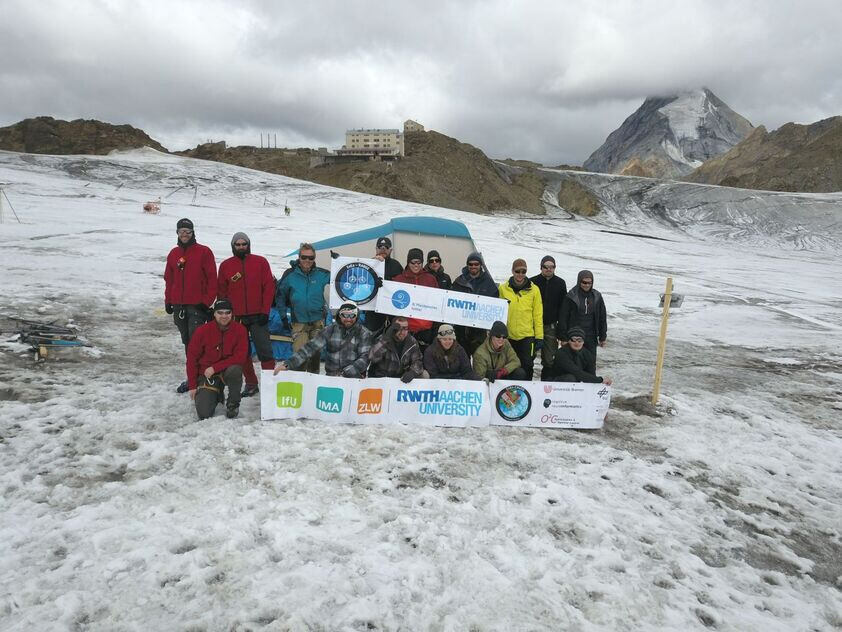 A joint glacier test was conducted by the Enceladus Explorer Initiative, EnEx, at Langenferner near Santa Caterina Valfurva in Italy between August 9 and 29, 2017. The goal of the initiative, funded by the DLR, is to prepare a space mission for the search for extraterrestrial life on the Saturnian moon Enceladus, which possesses extensive water bodies underneath a thick sheet ice. A melting probe, capable of navigating autonomously, is used to detect the water-filled crevices under the icy surface, drill through them, take liquid samples, and analyze them. New key technologies are being developed within the EnEx Initiative, particularly to assist with navigation in the ice. These technologies will assist with a future space mission to Enceladus.

Last year, a discovery made by RWTH showed that the environment of the alpine camp Refugio Gianni Casati at the Langenferner glacier in the Ortler Alps was an ideal testing location for the earthbound testing of the developed navigation systems. More than 20 scientists recently convened for an intensive three-week field test. FH Aachen, TU Braunschwei, the University of Bremen, and the Aachen company GSI GmbH were involved in addition to RWTH Aachen.

The field test on the glacier at elevation of 3,000 meters was successful: a broad spectrum of measurements were taken during the expedition and multiple navigation scenarios were tested in the ice. One core aim was to test an innovative network of autonomous ice melting probes to determine the location of the navigable probe using ultrasound. This technology was developed in the EnEx-RANGE project at RWTH. Acoustic detection measurements were conducted at depths of over 20 meters in ice, including sonographic measurements to identify barriers in advance and measures on the acoustic damping in the glacier.

The collaboration with GSI GmbH allowed the EnEx-nExT project at FH Aachen to gain valuable experiences in operating the overworked navigable probe, which proved to be very reliable. As part of TU Braunschweig's project EnEx-MIE navigation measurements were taken using a precise magnetometer. Additionally, the scientists created a highly-precise photogrammetric mapping of the surface of the test area.

All of the data from the individual systems was directly forwarded to the computers of the EnEx-CAUSE project at the University of Bremen via the surface station. In Bremen the data was successfully bundled and the position and location of all the probes in the ice could be determined exactly online. The result was used to plan the path of the navigable melting probe and to autonomously follow it. The autonomy modules from EnEx-CAUSE and EnEx-RANGE coordinated to conduct targeted measurements during the journey.

Two chains, measuring longer than 30 meters, were installed with temperature probes in the glacier to measure the temperature of the ice over a longer period of time for another RWTH project, EnEx-DiMIce. A large amount of data is now available to further develop the navigation technologies and improve the systems. A further field test is planned for next year to test the improved systems in the glacier.

Multiple institutes at RWTH are simultaneously involved in the EnEx Initiative. The EnEx Range project is an interdisciplinary collaboration between the 3rd Institute of Physics B headed by Professor Christopher Wiebusch and the IMA/ZLW & IfU institute cluster of Sabina Jeschke. The physicists develop the acoustic-sonographic systems for the imaging in advance, the localization with the probes of the acoustic sensor network, while the engineers research the application of autonomous strategies in robotics for the optimal network arrangment. The EnEx-DiMIce project, directed by Dr. Julia Kowalski, is part of the Aachen Institute for Advanced Study in Computational Engineering Science, AICES, and models the probes' melting process in ice.