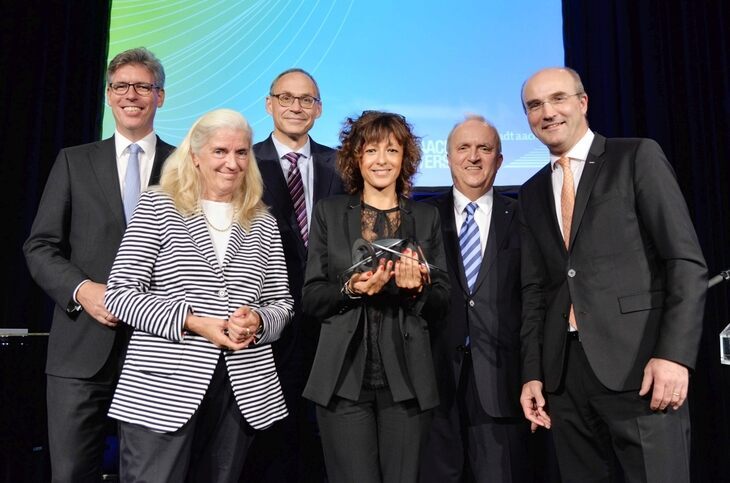 On Friday, September 7, the director of the Max Planck Institute for Infection Biology in Berlin and founding director of the Max Planck Unit for the Science of Pathogens, Emmanuelle Charpentier, was honored for her groundbreaking research on the CRISPR-Cas9 genome editing technology. Just one day later, the award recipient held the keynote address at the RWTH Aachen Graduation Celebration in front of 5,000 attendants at the Dressage Stadium of the Aachen-Laurensberg Riding Association.

On Friday evening, Professor Emmanuelle Charpentier received resounding applause and recognition in the Coronation Hall of Aachen City Hall. The City of Aachen and RWTH Aachen University presented the scientist with the 2018 Aachen Engineering Award.

As RWTH rector Ulrich Rüdiger pointed out during the award ceremony, “Emmanuelle Charpentier stands for one of the most groundbreaking discoveries of the recent past.” As a co-inventor of the CRISPR-Cas9 gene scissors, she has developed a gene-editing tool which can be used to treat genetic defects and serious illnesses, such as cancer, among others. “Our awardee has described a biochemical method that makes it possible to precisely cut and edit the DNA. This method is a paradigm shift in the life sciences – by contrast with other approaches, this method is simpler, faster, and more cost-efficient.” According to Rüdiger, Charpentier’s work serves as a bridge between biotechnology, which is developing into one of the most important, forward-looking science disciplines, and the engineering sciences.

In her acceptance speech, Charpentier painted a picture of her daily work: “A scientist’s everyday responsibility is to be and remain curious – and to work hard and be productive. In its methods, microbiology is very similar to engineering. Germany has a leading position in engineering, and I enjoy working in Germany, as it provides me with ideal conditions for conducting research on CRISPR-Cas9.” Not only for her field of research, but other research endeavors as well, it is crucial “that we deal responsibly with our developments and discoveries.”

“The innovations of engineers broaden the scope of our actions every day – in our private lives as well as in business and industry,” said Lord Mayor Marcel Philipp. “They help to secure the position of Germany – and, in particular, of our City of Aachen –, as a sought-after hub of innovation.” Thus, it is fitting to honor outstanding engineering personalities and achievements in this city.

The NRW Minister for Science and Research, Isabel Pfeiffer-Poensgen, lauded Emmanuelle Charpentier’s for her achievement and her role in science: “With your work, your appearance and personality, you are a great role model for students and young researchers.”

In his laudatory speech, Dr. Peter Eckes, the President of Bioscience Research at BASF Plant Science, provided a short account of Charpentier’s research career and honored her scientific achievement, dubbing her “a Cristiano Ronaldo of the biosciences”: “Emanuelle Charpentier has opened up new horizons in her discipline.”

Professor Udo Ungeheuer, the president of the VDI Association of German Engineers, highlighted that in Charpentier’s natural sciences research, insights and discoveries are being applied in an engineering frame of mind. “The decision to bestow the Aachen Engineering Award on Professor Charpentier thus also underscores that interdisciplinary collaboration is a hallmark of engineering research and everyday practice.” As a geneticist, she is also a practitioner in the art of engineering: “Microbiologists are engineers with genetic tools.”

Emmanuelle Charpentier studied biology, microbiology, and genetics at Pierre-and-Marie-Curie University and at the renowned Institut Pasteur in Paris, where she also completed her doctorate. She then completed research stays in New York and Memphis, returning to Europe in 2002 as an associate professor at the University of Vienna. She completed her habilitation in microbiology, moved to Umeå in Sweden, served as professor at the Hannover Medical School from 2013 to 2015, and was head of the Department of Regulation in Infection Biology at the Helmholtz Centre for Infection Research in Braunschweig.

The Aachen Engineering Award is a prize jointly awarded by RWTH and the City of Aachen with the friendly support of The Association of German Engineers VDI as the prize donor. The award is annually presented to an individual who has made a significant contribution to the positive perception and further development of engineering with his or her life’s work.

This is the fifth time the Aachen Engineering Award has been presented. The first recipient was Berthold Leibinger, partner at TRUMPF GmbH + Co. KG. In the years following the long-term director of the Laboratory for Machine Tools WZL at RWTH Aachen, Manfred Weck; the astronaut Thomas Reiter; and Franz Pischinger, founder of FEV GmbH, were recipients.

Microbiologist Professor Emmanuelle Charpentier (3rd from right) has been presented with the 2018 Aachen Engineering Award. The award was presented by the Lord Mayor of the City of Aachen, Marcel Philipp (left) and Professor Ulrich Rüdiger, the rector of RWTH Aachen University (right). The NRW Minister of Science and Research, Isabel Pfeiffer-Poensgen; Dr. Peter Eckes (3rd from left), and VDI president Professor Udo Ungeheuer congratulated the award recipient for her outstanding achievement.