You Are Here: RWTH Bids Farewell to Graduates With Festive Ceremony 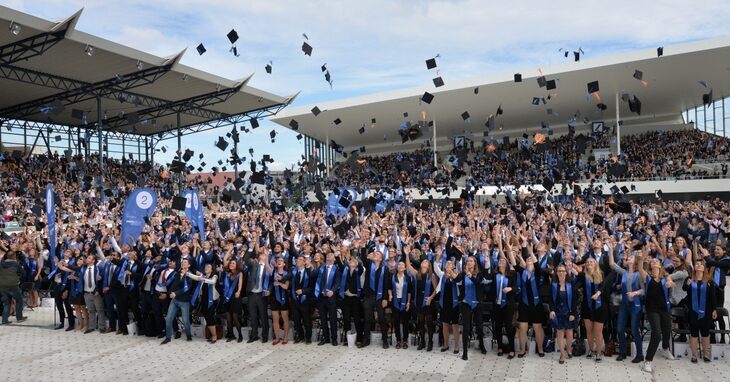 With a rousing commencement celebration powered by Amazon, 1,200 RWTH graduates celebrated the successful completion of their degrees. The recipient of the Aachen Engineering Award, Professor Emmanuelle Charpentier, addressed the graduates in her keynote speech.

Photos from the 2018 Graduation Celebration

The weather provided the perfect backdrop for this special occasion: Approximately 5000 guests had gathered in the bright sunshine on Saturday for the lavish celebrations at the Aachen Dressage Stadium. This year marked the fifth time that the Aachen University hosted a cross-faculty graduation celebration powered by Amazon and with it bade farewell to 1,200 graduates of both the 2017 summer semester and 2017/18 winter semester. 300 of the men and women were further honored for particular achievements with a Borcher's plaque or Springorum commemorative coin. They could be clearly recognized by the orange tassels on their caps compared to the regular RWTH blue. Doctoral jubilarians, who had begun their academic careers 50 or 25 years ago and wore gold or silver tassles and sashes, had already been honored earlier in the day.

In the interior space of the stadium, numerous sponsors and other guests of honor had assembled to pay tribute to the young adults, among them also Lord Mayor Marcel Philipp and Armin Cossmann, Regional Director of Operations at Amazon. RWTH Rector Professor Ulrich Rüdiger had teamed up with Professor Malte Brettel, Vice-Rector for Industry and Business Relations, to lead through the event and congratulate the men and women. "The graduates have worked hard towards this day and have achieved great results," Rüdiger said, remembering well his own graduation twenty-five years ago after gaining his diploma in Physics at RWTH Aachen. "Now you are ready for a new phase in your lives and I wish you all the best!" Professor Aloys Krieg, Vice-Rector for Education, the new AStA-Chair Jannis Koesling, and student Senate member Anita Otert-Enning congratulated the graduates as well.

Marching to the stirring orchestral sounds provided by the "Bläserphilharmonie Aachen" under the direction of Tobias Haußig – an ensemble incidentally featuring many RWTH members – the graduates from the nine RWTH faculties entered the stadium to songs of their own choosing while being cheered enthusiastically by friends and family. The recipient of the 2018 Aachen Engineering Award, Professor Emmanuelle Charpentier, later addressed the young men and women with her inspiring speech. The microbiologist, who co-developed the gene-editing tool "CRISPR-Cas9," which is considered to be one of the most groundbreaking scientific discoveries of the recent past, applauded the graduates for their achievement and remembered her own academic career: "The years I spent at university have made me a better person." Charpentier offered some insight into her research activities and her professional background and urged her audience to broaden their horizons and to be open to new ideas. "Thinking in terms of black and white doesn't get us anywhere," the founding director of the independent Max Planck Unit for the Science of Pathogens in Berlin stated. The celebration found its perfect finale in the traditional tossing of the caps: After counting down together, graduates and jubilarians – among them also Rector Ulrich Rüdiger – all tossed their headgear up in the air and celebrated to the German hit song "Ein Hoch auf uns."