You Are Here: Unmanned Flights Over the North Sea

Unmanned Flights Over the North Sea 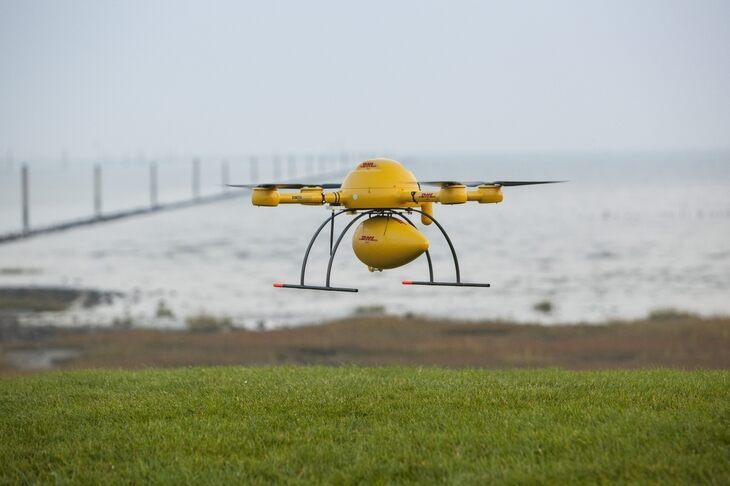 RWTH Aachen is supporting the DHL Parcelcopter research project between Juist, an island in the North Sea, and the mainland. An unmanned multicopter is being used for emergency care for island residents and tourists by transporting medicine across the sea. The device, which weighs about five kilograms, has already successfully completed initial trial flights.

The project is a challenge for Professor Dieter Moormann and his team from the Institute of Flight Systems Dynamics at RWTH Aachen University. Before the first flight in September numerous authorities in Germany had to be convinced that a flight over the North Sea is safe and technically possible. After all, a distance of twelve kilometers has to be covered – often during changing winds and even in fog. "All authorities, and above all, the State of Lower Saxony, accompanied and supported the project with a great deal of expertise after some initial skepticism," said Professor Moormann.

RWTH's large amount of experiences in the field of unmanned flight systems certainly contributed to this. In other research projects, RWTH developed or adapted flying systems to measure radiation intensity in the surrounding area after a hazardous incident in a nuclear power plant.

The island project is raising a whole new set of questions, emphasized Moormann. This ranges from the selection of departure and landing points on the mainland and Juist Island, including the flight corridor in between the points, to aircraft safety and emergency systems and the data link, through which the DHL parcelcoptor is monitored and controlled continuously during the flight.

At the same time, the Aachen scientists work with the project team on many technical details. Analyses during preliminary work included investigations on how to fly using as little energy as possible, and how the copter reacts to turbulence and nevertheless safely reaches its destination.

A long range data link was built and set up to cover the required distance. Typically copters are flown in sight. This means a pilot controls the device from the ground up to a distance of about 400 meters. However, the research project requires the aircraft to be programmed in advance and fly twelve kilometers unmanned and independently and then also land automatically. Since the copter does not use a camera, it permanently transmits its flight data. This is received by a ground control station, which, in this case, is a RWTH vehicle specially equipped for unmanned flying. The responsible pilot in command can then intervene in unpredictable situations and decide, whether or not the copter should turn around or fly to an emergency landing spot.

Live operations conducted by DHL Parcel have confirmed that the unmanned parcelcopter is safe and reliable and suitable for the considered emergency care. Such situations include when ferries cannot run due to icing up or low tide or rescue helicopters must stay grounded due to nighttime or fog.