You Are Here: Prestigious Award for Medical Researcher Christoph Kuppe 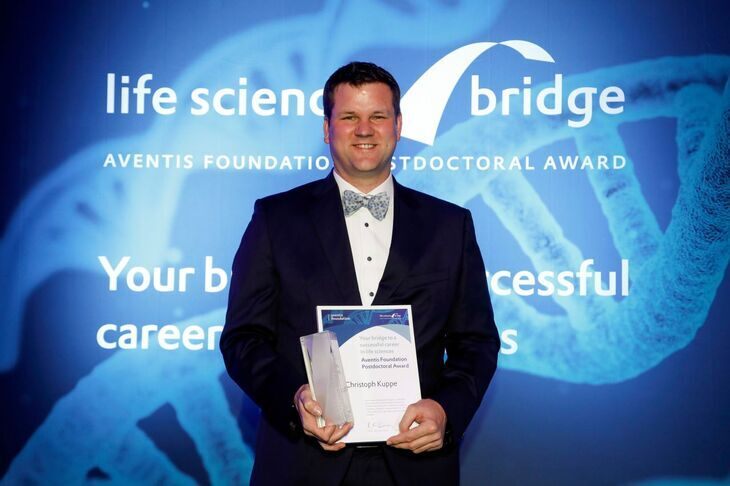 RWTH scientist receives the Life Sciences Bridge Award from the Aventis Foundation for his research on chronic kidney disease.

Dr. Christoph Kuppe has received a €100,000 Life Sciences Bridge Award from the Aventis Foundation for his research on chronic kidney disease (CKD). Kuppe is a research group leader at the Institute of Experimental Internal Medicine and Systems Biology at RWTH and a senior physician at the Clinic for Renal and Hypertensive Disorders, Rheumatological and Immunological Diseases at Uniklinik RWTH Aachen. The Life Sciences Bridge Award is one of the most valuable prizes for early-career researchers in Germany and is awarded annually to three prize winners undertaking research at German universities.

Healthy kidneys regulate the fluid and electrolyte balance by filtering up to 180 liters of primary urine from the blood and concentrating it to less than two liters of urine per day. In those suffering from CKD , this filtration rate drops by half. The progression of chronic kidney disease, which affects more than ten percent of the world's population, can hardly be halted at present. It is characterized by increasing scarring of the kidney and usually results in cardiovascular or renal failure. The junior research group of PD Dr. Christoph Kuppe has investigated the molecular origins of this disease by analyzing the epigenome, transcriptome, and proteome of individual kidney cells.

Kuppe and his team subjected about 100,000 cells from healthy and diseased kidneys to single-cell RNA sequencing and determined which genes are active in each of these cells. Using bioinformatics methods, they recorded the results in a temporally differentiated coordinate system – a kind of activity map for kidney tissue. The team succeeded in proving that fibroblasts and pericytes are the cellular origins of renal fibrosis and discovered that the protein NKD2 plays a role as a signaling molecule in this process. As a result, NKD2 could provide a target for drug therapies.

Building on this work, Christoph Kuppe, as head of an Emmy Noether junior research group, is also concerned with the analysis of the signaling pathways of diabetic kidney disease (DKD), which affects about one-third of all CKD patients and is only insufficiently understood in its multiple causes. “My goal is to better understand the heterogeneity of these patients at the molecular level in order to treat them as individually as possible.” To achieve this goal, Kuppe has established a multi-layer sequencing model for single cells in the DECODE-DKD project. In this multi-level single-cell omics approach, he traces not only the transcriptome and proteome of each observed cell, but also its epigenome, that is, the state and accessibility of the chromatin in which DNA is packaged in each nucleus.

Christoph Kuppe completed his medical studies at the RWTH’s Faculty of Medicine, where he also obtained his doctorate in 2011. After completing a medical residency at the Clinic for Renal and Hypertensive Diseases, Rheumatological and Immunological Diseases at Uniklinik RWTH Aachen, he obtained a Master of Health and Business Administration (MHBA) degree from the University of Erlangen-Nuremberg. As a postdoc, he conducted research at the German Cancer Research Center in Heidelberg and at Erasmus University Rotterdam. At the end of 2021, Kuppe became an Emmy Noether Junior Research Group Leader, funded by the German Research Foundation (DFG). In early 2022, he received an ERC Starting Grant from the European Research Council.