You Are Here: Guesthouses 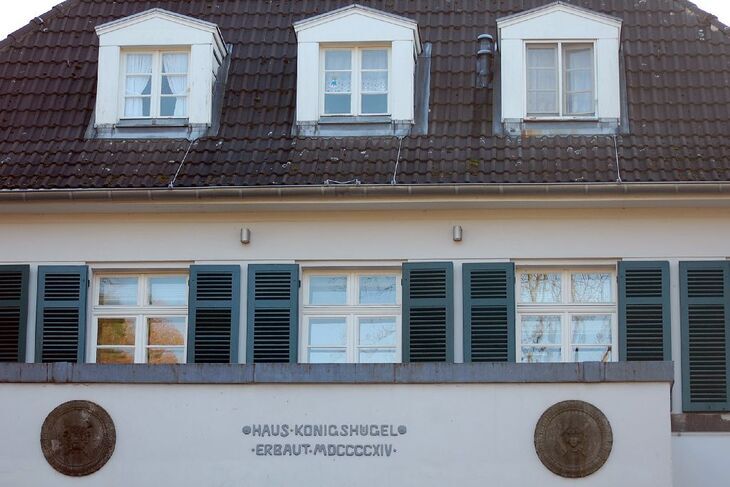 Currently used as an RWTH guesthouse, Haus Königshügel was originally built in 1913 and 1914 as a villa for Aachen manufacturers Leo and Elisa Lammertz. A foundation stone on the outside wall of the terrace dated September 27, 1913, commemorates the site's groundbreaking, planned by architect Carl Sieben.

Since renovation work in 2005, the upper floor of Haus Königshügel has been available to RWTH guests as single and double rooms. Furthermore, the building is used for university institute events, such as exhibits, workshops, meetings, and receptions of the Rectorate.

Rooms in Haus Königshügel can also be used for hosting university institution events such as exhibits, workshops, and the signing of contracts. The fireplace and parquet rooms are suitable for up to 100 guests, or, when furnished, for about 60 people. The Club Room on the first floor offers space for about 14 guests.

Through the efforts of the Alexander von Humboldt Foundation, the Volkswagen Foundation provided the means for the renovation as a guesthouse and for the new construction of an apartment building, together with a donation from the Krupp Corporation in 1967-1968. This facilitated the current site, constructed according to design plans by architects Professor Steinbach and Kohl. One of the daycare centers run by Studierendenwerk (Student Services) in a former summer house was also included.

RWTH offers various accommodation options in the guesthouses in the immediate vicinity of the University campus with Haus Königshügel and Europagästehaus.

The hotel rooms and apartments are exclusively intended for invited guests of RWTH Aachen University.

Villa Königshügel offers accommodation for short stays, with the rooms equipped with everything necessary for your stay in the style of a hotel without any self-catering facilities.

Europahaus offers accommodation for stays from one month up to one year. The apartments are equipped with a kitchenette and with everything you need for a longer stay.

1) The accessible apartment in Europagästehaus is charged as a single apartment.

2) A deposit of 400 euros is required for room use, which is offset against the cost of a final cleaning and possible compensation.

3) Use of the event room is permitted Mondays to Fridays until 8pm at the latest.