You Are Here: 2014 Distinguished RWTH Fellows 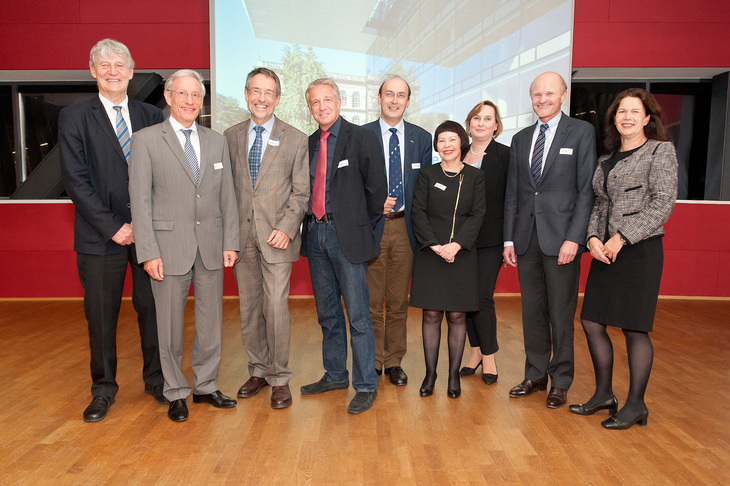 Professor Hegger has set high standards internationally in his field of expertise – he belongs to the small group of top researchers in civil engineering. As a spokesperson for the Collaborative Research Center "Textile-Reinforced Concrete," he has played a major role in the development of this new technology. He is appointed RWTH Fellow for his outstanding research achievement, which has contributed to putting RWTH Aachen on the map internationally in this field of research.

Since her appointment as University Professor at RWTH Aachen, Bettina Wiese has strongly contributed to raising the profile of the Faculty of Arts and Humanities and of the University as a whole, in particular through a number of significant publications in high-profile academic journals.

Professor Rik W. De Doncker has been awarded with the title "RWTH Fellow" for his outstanding research work in power electronics and energy technology. His extraordinary accomplishments and excellent reputation are underscored by a large number of honors and awards and his success in receiving funding for large-scale projects such as the Research Campus Electrical Networks of the Future.

Professor Wolfgang Bleck is a highly recognized, internationally known researcher in the field of steels. He was spokesperson for the Collaborative Research Center 761, "Steel Ab Initio," whose combination of fundamental and applied research contributed to his worldwide recognition and visibility. His is awarded the title "RWTH Lecturer" for his outstanding research achievements and his unfailing dedication to RWTH Aachen University.

Professor Fritz Klocke is an internationally renowned expert in manufacturing technology, an excellent scientist of the highest reputation. He has contributed inordinately to the international standing of RWTH Aachen, and he has sustainably shaped the WZL, one of the most reputed research labs for machine tools both nationally and worldwide.

Professor Schröder has been appointed RWTH Lecturer for his outstanding research in Fluid Mechanics and his important contributions to the strategic development of the University. Having developed innovative numerical and theoretical approaches as well as novel experimental methods, he is among the world's leading scientists in fluid dynamics.

Professor Christian Trautwein is currently Director of the Medical Clinic III at University Hospital Aachen. He is appointed RWTH Fellow due to his outstanding research performance. As one of the leading experts worldwide on the topics of livers inflammation, liver damage, and the genesis tumors in the human liver, he has an impressive publication performance record. He is spokesperson for the DFG-funded transregional collaborative research center "Organ Fibrosis" and contributes to other EU- and DFG-funded research initiatives. Furthermore, Professor Trautwein is active in national and international medical organizations and acts as an editor of various scientific journals. He is a member of the Strategy Board of RWTH Aachen and thus contributes to developing future strategic plans and priorities of the University.

Department of Pediatric and Adolescent Psychiatry and Psychotherapy

Chair of Manufacturing Technology/Laboratory for Machine Tools and Production Engineering

Chair of Fluid Mechanics and Institute of Aerodynamics