You Are Here: Brigitte Gilles Prize

Written nominations for the 2020 award will be accepted until December 13, 2019. 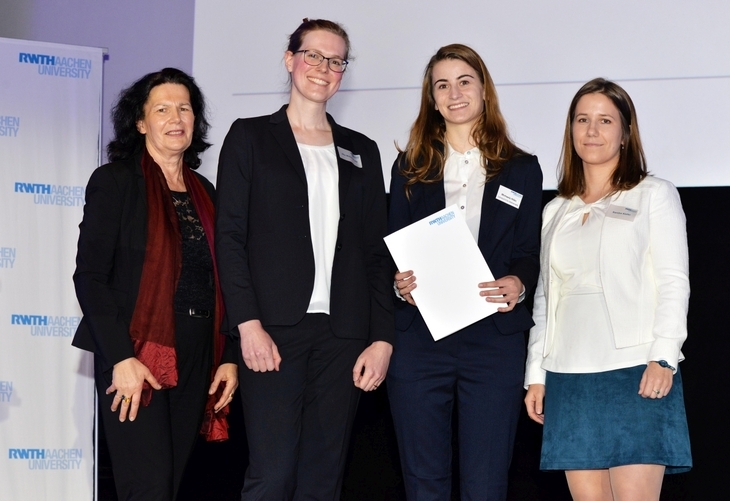 Every year, RWTH awards the Brigitte Gilles Prize, which bears the name of the University's first women's affairs officer, Professor Brigitte Gilles. The topics are determined anew with each call for nominations, which is published in the middle of the year.

The aim is to reward innovative projects and measures that make a significant contribution to the advancement of women. The award seeks to support measures which improve the conditions for teaching, learning and research as well as the organization of women's work. Furthermore, projects that help increase the number of women students and scientists in subjects with a low proportion of women are eligible. The successful implementation of requirements as listed in the RWTH Equal Opportunities Plan are also eligible.

The call for nominations is made both internally at University and externally at schools in order to work towards these goals early on.

The prize will be awarded in the following categories:

The prize winners will be presented with their awards, endowed with 2,500 euros each, during the annual "RWTHtransparent" event.

The nominated projects should not be more than two years old and should be connected to RWTH Aachen University. They may be in the development stage, but it must be ensured that the projects are being implemented. The prize can be awarded to individuals or groups of individuals.

Please submit your written nomination to akad@zhv.rwth-aachen.de until December 13, 2019. It is expected to include a written presentation of the project and should be approximately three to four pages long.

History of the Award

RWTH presented this award for the promotion of women for the first time in 2000. It was renamed the Brigitte Gilles Prize in 2008. The award seeks to supported school projects that contribute to awakening and promoting girls' interest in science and technology as well as university-internal projects and measures for the advancement of women.

Brigitte Gilles was Full Professor of Psychology since 1980 and Dean of the Faculty of Education since 1983. After the closure of the department, she remained a professor at the RWTH Faculty of Arts and Humanities until she retired in 1994.

Brigitte Gilles has been committed to creating an equal opportunities institution since the beginning of her career, as she had been working on scientific studies on gender-specific inequalities for quite some time.

In 1991 Brigitte Gilles was elected as the first women's affairs officer of RWTH Aachen University. She formulated her goal very clearly after the election:

I want to open women's eyes to all their opportunities.