You Are Here: The 2020 Nobel Prize in Medicine

The 2020 Nobel Prize in Medicine 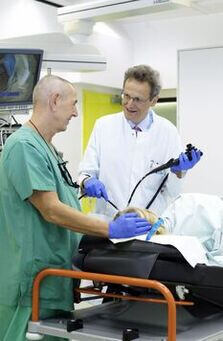 “The most remarkable medical success story of the past 30 years”

This year, the Nobel Prize in Medicine was awarded jointly to two US American scientists, Harvey J. Alter and Charles M. Rice, and British scholar Michael Houghton for their discovery of the hepatitis C virus. In an interview, Professor Christian Trautwein, head of the RWTH Internal Medicine Department (with a focus on gastroenterology and metabolic diseases) and Director of the Clinic for Gastroenterology, Metabolic Disorders and Internal Intensive Medicine (Medical Clinic III) at Uniklinik RWTH Aachen, explains the significance of the prize winners’ work.

What exactly did they discover?

There are various forms of viral hepatitis – A and B were already known. Another common but new form was non-A non-B hepatitis. Early on, researchers assumed that this was another virus-related chronic liver disease caused by an as of yet unknown virus. A large number of patients died as a result of chronic non-A non-B hepatitis due to liver cirrhosis or hepatocellular carcinoma (HCC). Then – it was the time around the German reunification – scientists succeeded in discovering the hepatitis C virus (HCV). This was one of the first voyages of discovery in medicine based on molecular diagnostics. These three people were involved in the discovery, and they developed the first diagnostic systems with which new therapies could be derived and tested. Within 25 years, the virus was discovered, diagnostic kits were developed, and the virus could be treated very effectively within a span of eight weeks. We currently assume that these measures will make it possible to completely eradicate HCV in the Western world in the medium term. That is why the discovery of the hepatitis C virus, the development of diagnostic kits, and its therapy can be called the most remarkable success story in medicine of the past 30 years.

So the researchers are worthy of the Nobel Prize in several ways – both for discovering and fighting hepatitis C?

The initial discovery was made mainly by Michael Houghton, but also by Harvey Alter. Charles Rice developed the replication system that enabled new treatments to be developed against the virus. On an interesting side note, this system was also developed at the same time by a team led by Ralf Bartenschlager in Heidelberg. He was actually the first to publish his work on the HCV replication system. So the three Nobel Prize Laureates – and our German colleague – have done pioneering work in the hepatitis C virus field, leading to our ability to now make a rapid diagnosis and start an effective therapy. I do feel very sorry for Ralf Bartenschlager, as he was actually the first to develop the decisive HCV replication system and now came away empty-handed at the awards

How much of a problem was hepatitis C before it was discovered, and what is the situation today?

Before its discovery, it was a huge problem. For a long time, patients with a hepatitis C infection were the largest group of patients requiring a liver transplant. The problem was that in the 1970s and 1980s, we had a lot of drug addicts. For them, half a year of drug addiction usually meant they would be infected with hepatitis C. Now, however, we can treat almost every case with the treatments that have been developed thanks to molecular diagnostics, thereby allowing us to inhibit and subsequently eliminate the virus.

To what extent is hepatitis C still being researched today?

Research is now only conducted in the area of possible vaccine development. We have not been able to find a vaccine yet, as was also the case initially with coronavirus or hepatitis B. Unlike coronavirus, Hepatitis C is very variable on the surface, making it so difficult to develop a vaccine, even though intensive efforts to do so are underway. But saying this, I have to add that effective diagnostics and treatments have been successfully developed. We wouldn't get any new substances approved for treatment in the foreseeable future because the current substances are so effective at eradicating the virus quickly. So really, there currently is no need for new drugs, whose development is also costly. This means that a medical need – that is the necessity to continue investing in this direction – no longer exists.

Does that mean we don’t have to worry about a severe case of hepatitis with dire consequences?

Infection with the virus can still happen, but we know that with the treatments, we can eliminate the virus very quickly and with very few side effects – all within eight weeks usually. Hepatitis C is still a problem in Third World countries, so vaccine development remains important, but in Europe, hepatitis is no longer of relevance. Even here, however, there are still a few patients whose infections are not detected, which is why we see room for improvement in the area of mass screening. But once it is detected, hepatitis C is no longer a problem.

How can I detect if I have hepatitis C myself?

That's the hard part. Usually, the body doesn’t sound alarm bells for a very long time; the liver is a good-natured organ. Only once a large percentage of the liver has already been destroyed do patients have noticeable problems. In some cases, hepatitis C is accompanied by fatigue and symptoms of depression, but unfortunately, we do not see any easy to spot signals like a runny nose or something similar.

How is the topic present at Aachen’s University Hospital?

We only look at the clinical aspects now. It is no longer a topic of research, although we in Germany have led the way with many studies in hepatitis C. The amazing thing is that within less than 30 years, a problem was identified and then solved – a success partly due to German university medicine. That's cool! We are still interested in developing a vaccine because that would mean that we would have successfully solved the aspect of prevention and successfully fought the virus in all of its elements. But science has long since turned to other new and exciting tasks.