You Are Here: From a Pepper in Your Hand to a Virtual Vegetable on a Screen: Creative Design Methods in Virtual Space

From a Pepper in Your Hand to a Virtual Vegetable on a Screen: Creative Design Methods in Virtual Space

They already count numerous followers in the gaming scene: so-called Virtual Reality (VR) applications in which you can directly immerse yourself in action using VR glasses. In industry, people often speak of "experiences" instead of "games" – that is how intense and realistic the effect is. VR is also already being used in medicine and architecture and it offers new possibilities in creative fields, too. Although modelling tools for computers are available, they are often perceived as not particularly intuitive and they require a cumbersome transfer of a real model using mouse and keyboard. This means that the creative process has to be interrupted again and again; working with two forms, i.e. on paper and on screen – is unavoidable. But what would happen if, for example, a designer or architect could create an object directly in virtual space? This is precisely the idea behind the interdisciplinary ERS Seed-Fund project Modeling in a Virtual Environment.

Prof. Michael Schulze, former head of the Department of Structural Design, and his research assistant Birgit Saupe, who specializes in the processing of clay and porcelain, initiated the project. They quickly fostered a close collaboration with Prof. Torsten Kuhlen, Dr.-Ing. Benjamin Weyers, and Thomas Knott from the Chair of Computer Science 12 (IT Center/ Virtual Reality and Immersive Visualization). 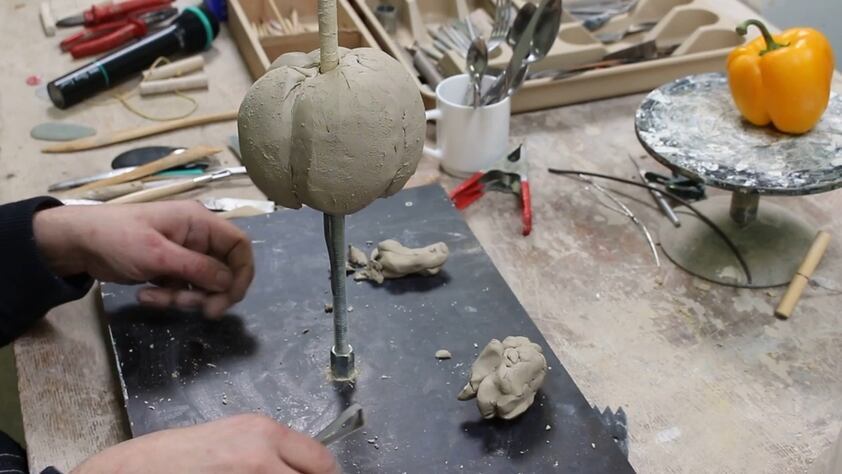 Copyright: © RWTH Aachen Work on the pepper out of clay in the workshop of the RWTH Department of Structural Design

The work started in the workshop of the Department of Structural Design at RWTH, where the employees were asked to form a pepper out of clay. The special thing about this task: the artists were asked to think out loud – an approach called the think-aloud method. The researchers were thus able to experience what goes through the minds of artists during the creative process. They wanted to understand how they work, why they choose certain tools, how the tools work, and what effect they have on the clay. The main interest was not in the specific properties of clay (which are rather difficult to represent virtually), but in relevant working processes such as removal and application, smoothing, and roughening. Initially, the architects were allowed to work as they wished, using only their hands or even tools. In virtual space, however, work can usually only be carried out with the help of a controller. The computer can recognize bare fingers accurately enough to produce an adequate virtual image only with a great deal of technical effort. Processing the clay with tools was therefore of particular interest to the researchers. 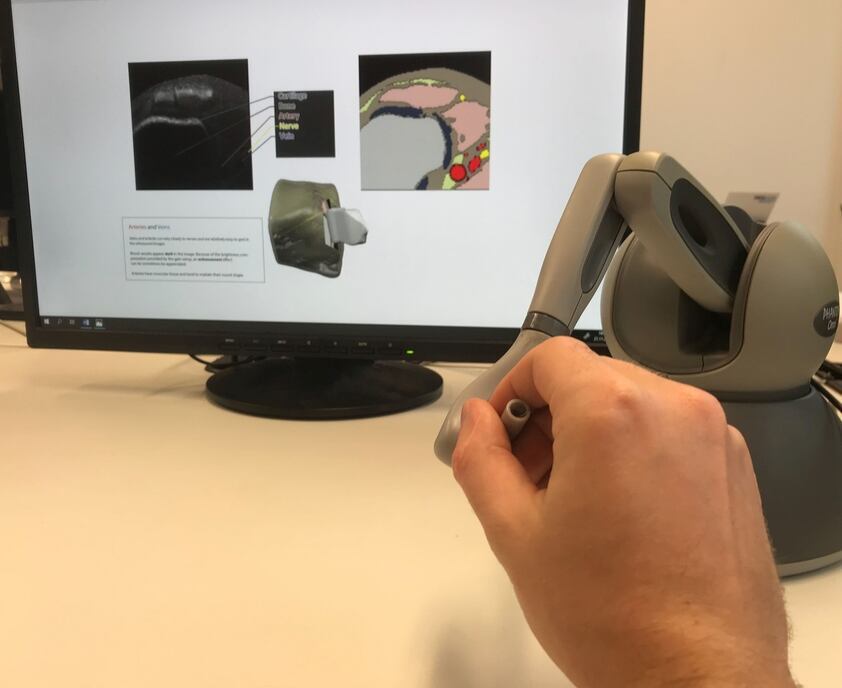 Copyright: © RWTH Aachen Pen-based controller, as is already being used in the field of medicine

"We then evaluated the resulting video material together," says Benjamin Weyers, "in this way we were able to narrow down the needs of future users more precisely. The knowledge gained from this is set to be incorporated into the development of a virtual tool. Through VR glasses you see the body you want to work on in virtual space. In your hand, you can hold a pen-based tool that is attached to the end of a movable arm. It can be individually determined which type of tool the pen should emulate in the virtual environment. If the tip of the tool touches the surface of the virtual body, the device generates a counter force via the movable arm. This creates the illusion of a real working process.

Weyers is very satisfied with the project. "A key question we now have is whether we can transfer the gained knowledge to other areas," he says, reflecting on the future of the project. The possible applications are extremely diverse: complicated repairs or complex operations can be carried out without risk of injury or harm. In the future, artists could work in virtual space directly instead of on models made of wood, stone, clay, or porcelain, thus saving time, work, and resources. Finally, the end product can be printed in 3D. More than enough material, in any case, for a lot of other research questions for which the project has created a solid foundation.