You Are Here: AMS Experiment 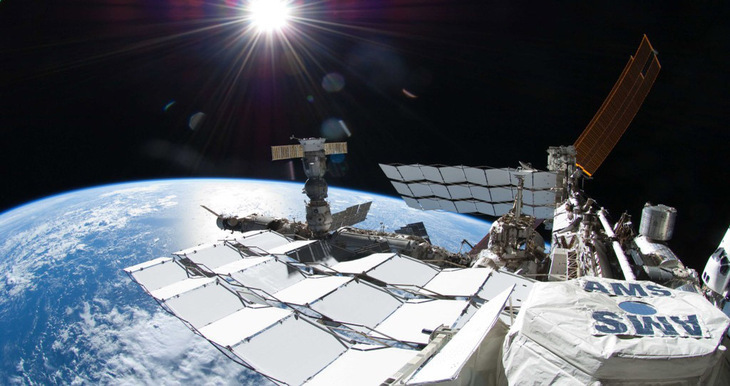 The question of the nature of dark matter, the cause of matter-antimatter asymmetry in the universe, or the structure of matter in neutron stars are all related to the basics of physics. AMS has the potential to provide important contributions to these topics in the next few years and to fundamentally change our worldview. The experiment began on May 19, 2011, when space shuttle Endeavour delivered the AMS to the International Space Station, ISS for short.

The AMS-02 experiment on board the International Space Station, ISS, is conducting precision measurements of cosmic ray composition till now. The search for antimatter and how it is expected from cosmological models as a remnant of the big bang is of particular scientific interest in the AMS experiment.

Furthermore, one of greatest open questions of modern physics is the nature of dark matter, which makes up about 90 percent of matter in the universe, according to current understanding. New insights for this question are also expected from the AMS, which should give us important information about the orgination and development of the universe.

We are still at the beginning of our research. But this much is already certain: With AMS, we will learn much about the composition of cosmic rays and thus also about how our galaxy is constructed and how our universe originated.

AMS is built by an international collaboration made up of 60 research institutes from 16 countries in close collaboration with NASA.

The RWTH Aachen Institute of Physics I in Germany plays a leading role in the experiment. The research work is funded by the DLR.

Detectors in the Universe - A Challenge

A prototype of the AMS, AMS-01, was successfully tested in 1998, during a ten day flight with the Discovery Space Shuttle. Traces of over 100 million charged particles of cosmic radiation could be measured during this short flight. The unexpected rich yield of first-class scientific results has markedly improved the measurements of cosmic ray construction until this point.

The flight with the Discovery Space Shuttle impressively demonstrated that it is possible to successfully operate modern detectors of particle physics in space. The particular challenge is to build precision measuring instruments in such a way that they withstand the mechanical strains during the start and landing of the space shuttle.

Furthermore all components must be weight-optimized, the power consumption of the detectors must be minimized, and the amount of data collected must be intelligently compressed, in order to transfer them to earth.

The particular external conditions in space, vaccum and temperature fluctuations of over 150 degrees Celsius, present extreme reqiuirements for the materials used and their accountability.

The education of young physicists (Diplom and doctoral theses) in this demanding international environment opens up attractive prospects for a future career both in research and in industry.

Students have the possibility to write their final papers and theses within the context of the AMS experiment. The following topics have been worked on in the recent past: