You Are Here: "Goal Control" Could Have Cleared Things Up - Panel Discussion at RWTH on Goal Line Technology 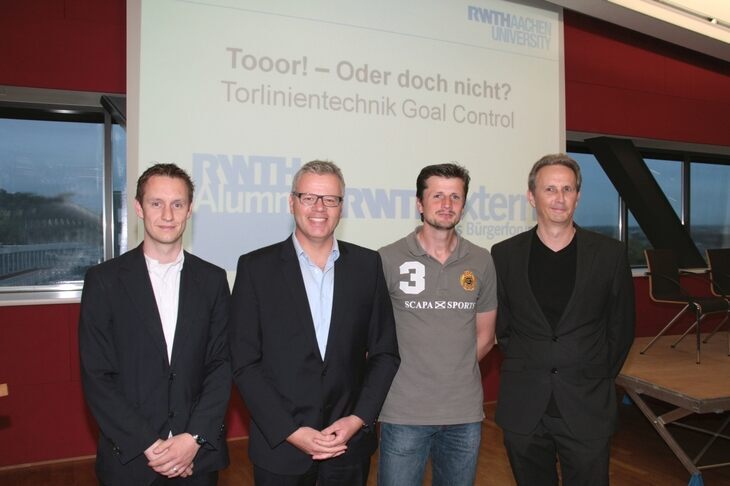 Mats Hummels: Goal scorer or not? According to Dirk Broichhausen, Executive Manager of Goal Control in Würselen, his company's goal line technology could have easily shown whether the header from the Dortmund player in this year's DFB final was behind the line or not.

This topic hasn't just been extensively and emotionally discussed in media, football clubs, and regular get togethers. The RWTHextern Citizens' Forum and the RWTH alumni network held a discussion panel on the topic "Goal or Not". Dirk Broichhausen and Reiner Plaßhenrich, Co-Coach of Alemannia and former professional player, and Darius Kudela, referee in the League of the Middle Rhein, argued in favor of using the goal line technology. "It's a useful tool for referees," said Kudela, providing his perspective as a DFB referee who is also about to complete his medical studies at RWTH.

The discussion was moderated by Christoph Pauli, Sports Editor of the Aachener Zeitungsverlag, didn't just leave it at the discussion of current events but rather also thought about possible consequences in sports. How much technical influence can football handle? "We aren't that far from clarifying offside questions with our technology," said Broichhausen. Furthermore, application is also possible in game analysis. Despite these possibilities, goal line technology – and all the experts agreed on this one point – should only be used when the question is asked "goal or not?"

After the goal by English midfielder Frank Lampard was not recognized in the 2010 World Championship quarter final game between Germany and England, the FIFA world football association changed its mind and has allowed goal line technology to be used at this year's world championships in Brazil.

Maybe the most recent dispute at the cup finale after the German professional associations repeatedly rejected the technology could turn a page in favor of goal line technology. Dirk Broichhausen hasn't given up hope yet that goal line technology will be used eventually in German football, at least in the Bundesliga: "It's more of a commercial question than a technical one. Maybe the richer clubs could support the others a bit."