You Are Here: Tim A. Osswald 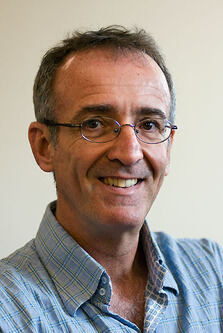 “It was a very good time for me“

Osswald remembers the two-and-a-half-years he spent in Aachen. Osswald came to RWTH Aachen University in 1987 where he started his research work at the Institute of Plastics Processing, IKV. His research was funded by the Alexander von Humboldt-Foundation and the IKV that was already known as one of the most prominent research institutes for Plastics Engineering in Europe at that time. Osswald points out that much of the institute’s reputation goes back to Prof. Emeritus Dr.- Ing. Georg Menges. The former head of the institute (1965-1988) is widely acclaimed as pioneer in Plastics Engineering and was admitted to the Plastics Hall of Fame in 2006 for his lifetime achievement – a nomination that is widely regarded as one of the greatest honors in Plastics Industry. Today, Osswald is a well-known scientist in the field of Plastics Processing himself. Since 2001 he does not only hold the Kuo K. and Cindy F. Wang Professorship at UW-Madison, but is also co-director at the Polymer Engineering Center.

Osswald’s research focuses on the modeling and simulation of polymer processes, engineering design with plastics, sustainability and biopolymers. The cooperation with German research institutions has always been important for Osswald since “Germany is a forerunner in creating technological ideas and innovations.”

Only recently, in autumn 2012, the Rector of RWTH Aachen University, Professor Ernst Schmachtenberg, hold a lecture at UW-Madison about RWTH Aachen and the Excellence Initiative. Like Osswald, Schmachtenberg is a Professor of Polymer Engineering. The two know each other since Osswald’s research stay in Aachen. As former head of the department at the Institute of Plastics Processing, IKV, Schmachtenberg was his first contact person, Osswald explains. Later they met again at the University of Erlangen-Nuremberg, where both of them worked and became collegial friends. This explains the good cooperation between the IKV and Osswald’s department at UW-Madison. Apart from the close cooperation with RWTH Aachen University, Osswald has established many other contacts with scientists from all over Germany. Scientific networking, Osswald points out, therefore is the basis for joint research projects as well as for successful scientific and academic exchange. Consequently, many of his doctoral students and young researchers benefit from Osswald’s close contact with RWTH Aachen and the IKV. At the moment, four of them are writing their doctoral thesis at RWTH Aachen. In return, every year two or three students from the IKV are given the chance to go to Madison and carry out their research projects, funded by the German Academic Exchange Service, DAAD. Over a period of four or five years, around a dozen of talented young researchers have participated in this German-American research exchange. Many of them are successful now in pursuing their academic career at other universities.

When RWTH Rector Ernst Schmachtenberg visits UW-Madison, Tim Osswald is not the only one with whom he can speak German. “Many of my colleagues have at least once been in Germany!” Osswald reports. One prominent example is the chancellor of UW-Madison, who did a research project at RWTH Aachen forty-five years ago. Another colleague received his diploma from Aachen thirty-five years ago. “This is certainly one of the reasons why RWTH Aachen University is known in the engineering departments of all bigger US-Universities.”

Tim Osswald himself has German ancestors and grew up in South America, speaking both German and Spanish. Since he lectures in Germany and also publishes some of his works in German, that is quite an advantage. “As far as I am concerned, I would have liked to stay or return to Germany for a professorship, but in the end this would have been too hard on my family.” This year, Osswald and his wife will visit Aachen again. Together with some friends they will celebrate their Silver Marriage Anniversary at Aachen Town Hall where they got married 25 years ago.