You Are Here: Jayant Baliga 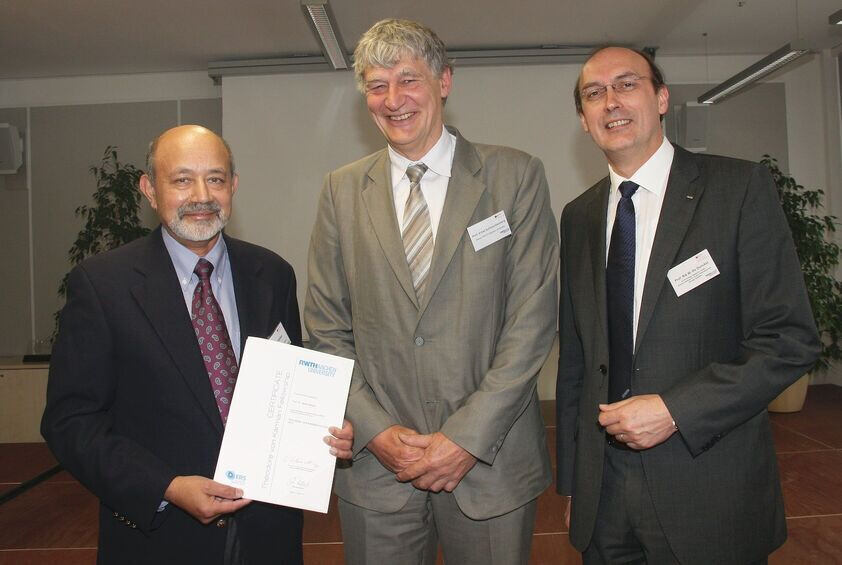 Prof. Baliga, you are an internationally recognized expert and researcher in the field of power electronics and power semiconductor devices. Furthermore you are the inventor of the Insulated Gate Bipolar Transistor (IGBT) – which is the most widely used power transistor today.

Generally speaking, can you briefly summarize what your field of research is about?

Basically my research is on making very efficient power electronics for power management and power delivery. The IGBT is very useful in all sectors of economy for consumers. To give some examples: At home you need it for washing machines, refrigerators, air conditioners. You also need it in factories for running robots, electric cars or electric trains. Moreover, it is a very important technology for future renewable energy generations. It allows you to move away from fossil fuels like coal and gas and instead use wind or solar power. However, all this needs power electronics to generate the electricity in the correct format that we use in society. I was fortunate to invent this device. Although I have more than a hundred patents, the most important patent is the IGBT which I developed in the early 1980s. The fact that its significance was immediately recognized by General Electric, where I was working at that time, allowed me to commercialize it and be very successful.

Despite your tight schedule you have found the time to come to Aachen for two months. I would like to know what has led to the cooperation with RWTH Aachen University and your research stay at E.ON Energy Research Center?

At North Carolina State University we began a major program on micro grids and intelligent grids in 2008. It’s called the FREEDM Systems Center. FREEDM is associated with creating technology similar to what E.ON is doing over here in Aachen. At the beginning of the program we had to write a very competitive proposal to the National Science Foundation (NSF). Out of 120 proposals they gave money to three university teams and we were one of them. We were very proud to win this as a lead university! We have four additional US universities as partners. NSF also asked us to partner with foreign universities. We chose Prof. De Donckers program at the E.ON Energy Research Center at RWTH Aachen University because he is very well known and very strong in the field of power electronics and renewable energy. The cooperation between the two universities already exists since 2008. Two years ago one of my PhD students who spent two months at your university came back saying how nice it was in Aachen. After that I said “I should go to Aachen myself and spend some time!” I was fortunately able to arrange that with Prof. De Doncker.

What are the goals of this research cooperation?

The goal of our cooperation with RWTH Aachen is the exchange of information and knowledge, but also the training of students. NC State University sends students to Aachen and vice versa – that’s the main benefit. Sometimes also professors take part in the exchange – like I have done it now.

Looking back on your stay at RWTH Aachen University - What was your most rewarding experience?

First, I was surprised and impressed by the scope, the size, the magnitude and diversity of the program here. I participated in the E.ON ERC’s scientific advisory board meeting where all the activities were presented and people from the distinct institutes and research areas came together. It was very impressive to see how well all this is coordinated. The other impressive thing for me is the large amount of interest that students have in the field of power electronics! In my own university I usually have no more than 15 students in my class, whereas here at RWTH Aachen I have 45 students! It is very impressive to see the difference!

You are originally from India and graduated with a B.Tech. in Electrical Engineering from the Institute of Technology in Madras. After that, in 1969, you went to the United States for your master’s degree, where you live and work ever since.

What was your motivation to study in the United States?

When I went to the United States I had just graduated from college and I was only 21 years old. I remember writing in my application for graduate school that the reason and motivation I wanted to go, is to make an important contribution to society, that I want to do something that will help society. People might think that is very naïve and idealistic for a young person, but I actually achieved it…and obviously it was not so naïve! For me that had always been the focus of my interest which is not just to create something because it is novel but to create something that will also benefit the people in terms of using it in society!

When you think back on your time and experiences as a young student and researcher in the United States – what was it like to live and study in a foreign or new country?

One of the problems with moving into any new society is to get adjusted to the way people think. In India we grew up - at least at that time - to be very humble. We were taught not to boast about our accomplishments. When I came to the United States I found out that if I wanted to be successful I had

to change my attitude since in the States the culture is to sell your ideas, to sell your work, to sell yourself all the time. I had to overcome the basic lessons that I learned at a young age and that’s not easy of course.

What can the German research landscape learn from the US and vice versa?

I am very impressed and amazed about Germany‘s commitment to renewable energy. We don’t have that in the United States. We are struggling to get proper support for renewable energy, and there is a constant push back from the old industries. When I drive around in Germany I see so much in wind power being done, in solar power being done, I see the type of funding and investment given to the universities and companies – so I’m most impressed by seeing that happen.

Not long ago, in October 2011, you received the National Medal of Technology and Innovation for your lifetime achievements, in particular for that of the development and commercialization of the IGBT. The award is the highest honor bestowed by the United States government on scientists, engineers, and inventors. What does it mean to you?

The award meant an enormous amount for me in two ways: One of the things that happened with the IGBT is that when I proposed it there were a lot people who said that it wouldn’t work, that it would have all kind of flaws. I spent four or five years successfully developing it at GE. When I met Jack Welsh he said: “This is so important to GE, we don’t want our competitors to have this device to make the same appliances“. That is why I had to keep my invention (and further development) of the IGBT as a secret for some years. Eventually it was allowed to be released, but then people started claiming they had the idea before me. You can imagine now, how happy I was when the President gave me the medal, because it officially says it is Baliga who invented the IGBT!

The other part that was very important to me is …imagine I came as an immigrant from India to the USA and here I am standing in the White House being honored by the President – it’s unbelievable! It brings tears to my eyes every time I think about it. Anyway, I was so happy that it happened. The nice thing about the award is that it is presented personally by the President. He puts the medal around your neck in a grand ceremony held at the White House. After that people in India suddenly realized that I have done important work (laughs). One Indian magazine published an article called “The 35 top thinkers India has produced since 1975” and I was among them. That is very gratifying!