You Are Here: Jaakko Malmivuo 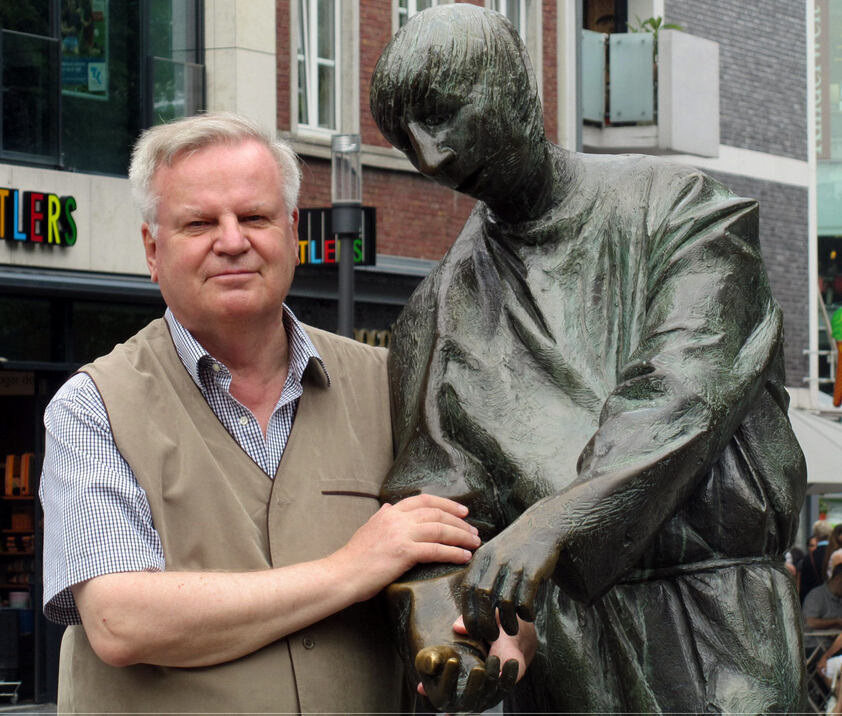 Can you explain in a few sentences what your main research field is all about and its importance in a broader context?

My research field is bioelectromagnetism. It discusses the bioelectric and biomagnetic phenomena in living tissues. As examples I could mention the electric field of the heart, the ECG, and that of the brain, the EEG, as well as the corresponding magnetic fields MCG and MEG. Stimulation of the tissue with electric and magnetic fields is also included. An important topic is also making an image of the cross-section of the body by electric means called impedance tomography. This plays a central role in the research and development at the Chair for Medical Information Technology of the Helmholtz Institute. Bioelectromagnetism is widely applied to medical diagnosis and therapy.

What led to your research stay and the lecture series at RWTH Aachen?

I have known Professor Emeritus Günter Rau for 30 years and Professor Steffen Leonhardt for several years, and we have very similar research interests. Besides my interest in research on bioelectromagnetism I am very interested in education. I have written a book on bioelectromagnetism with Professor Robert Plonsey, and I have lectured on this topic at several universities all over the world. Professor Leonhardt was aware of this and he was interested in developing the education at MedIT. When we met at a conference in July 2013 in Osaka, we discussed my possible lecturing in Aachen and this came true during the 2014 summer term in the form of the Theodore von Kármán Fellowship. This has been a great honor to me.

How do you remember the interaction with students and fellow researchers during your lectures at RWTH Aachen University?

I was glad to recognize how interested and concentrated the students were during the lectures. I gave the lectures in English and I was delighted to see how good of a command the students have of the English language. I also had the opportunity to have interesting and stimulating discussions with scientists from the institute. I hope that I was helpful to their research work.

Is this your first visit to Germany? Is there something you think German academia could learn from academia in Finland or vice-versa?

I have visited Germany several times, mainly due to my activities in research. In 1988, I served as Visiting Professor at the Technische Universität Berlin (West) for three months lecturing on bioelectromagnetism and biomedical engineering. I have recognized that German students’ English language skills have considerably increased from that time.

Internationalization is especially important for us Finnish people because we are a small nation, with only 5 million people and a language, which is not understood anywhere else in the world. In 1991, I made the courageous decision for us to change the instructional language to English, including for Finnish students, at my institute at Tampere University of Technology. Also, all the MSc theses have been written in English since then. PhD theses were already written in English before that. My institute was the first of the Finnish universities to do this. This was an important step forward in the internationalization of the Finnish students. We also started to accept foreign students to study at our institute.

From the time of my visit to Berlin in 1988, internationalization has made great progress in the German universities. But still the majority of the lecture courses and written theses are in German. I would encourage German universities to proceed in this internationalization process, and I am glad that I have had the opportunity to participate in it.

Could you please summarize your stay at RWTH Aachen University – What was your most rewarding experience? Which tangible outcomes of your stay are most important?

I very much enjoy lecturing. In Aachen, I had a large number of responsive students who were ready to ask stimulating questions. But lecturing, as well as writing a textbook, are not just to tell how things are. A great deal of that process also provides the possibility to further develop the theory and introduce new aspects into the discipline. I could devote a lot of time to this in Aachen and the course was remarkably developed during my lecturing time. Because the lectures were recorded on video, all these contributions are stored and available for viewing later.
During my stay my German language skills also improved, though I still have a long way before fluently communicating

An interesting detail is that the theories and inventions of Hermann Ludwig Ferdinand von Helmholtz play a major role in the theory of bioelectromagnetism. Therefore, for me, visiting the Helmholtz Institute was kind of a pilgrimage.

Is there anything else you would like to say or do you have further comments?

Aachen is a fantastic city. It is great to think that in the time of Charlemagne some 12 hundred years ago Aachen was the center of the western world. The heritage of Charlemagne still exists in the cultural buildings of Aachen, and it is great that this year happens to be his memorial year.

During the weekends my wife and I enjoyed the rich cultural history of Aachen and we also made visits to the beautiful medieval towns in the surrounding area.

As a professional opera singer I enjoyed the high artistic level of Aachen Opera and we also attended the “Pferd & Sinfonie” in CHIO. I was not aware in advance that Aachen is really a city of world class horse sports.
I hope and believe that my collaboration with the Helmholtz Institute continues and that I have the opportunity to visit Aachen again.

At the same time I thank Professor Steffen Leonhardt for the invitation and hosting me and I wish all the success to him and his research group, which has proven to be a leading group in its research field.