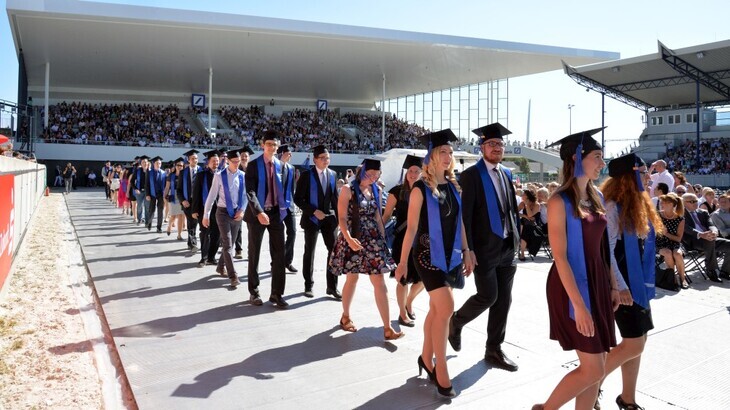 The Aachen Dressage Stadium, normally an arena for horses and riders, provided again the backdrop for the RWTH Aachen Graduation Celebration on September 10, 2016. Approximately 1000 graduates from all nine faculties celebrated their graduation celebration together.

Photos from the 2016 Graduation Celebration

The Aachen dressage stadium was filled with a sense of anticipation and joy on Saturday, when more than a thousand graduates of all the different faculties at RWTH Aachen were given an affectionate send-off into the new stage in their lives with the locally flavored farewell motto “Tschö Wa.“ With the temperature a balmy 25 degrees Celsius, the graduates filed into the stadium grouped according to faculty. Approximately 4000 relatives, friends and guests from university and local politics cheered them on, while Koninklijke Philharmonie from the Dutch town of Bocholtz, as in the years prior, provided the fitting soundtrack for the grand entrance of the nine different faculties respectively.

RWTH Rector Ernst Schmachtenberg and Chancellor Manfred Nettekoven, who moderated the event, both congratulated the graduates on their degrees: Bachelor, Master or doctoral degrees. More than 160 of them received special honors due to their outstanding achievements. Gold and silver jubilarians, who began their academic careers 50 or 25 years ago and have since become successful leaders in the areas of industry and science, were also included in the ceremony and were seated in the inner circle in front of the big stage. This year’s graduates were credited by Rector Schmachtenberg as being mature individuals who are well-prepared for any challenges that wait in store for them during their future careers. He also encouraged their parents: “You can stop worrying now, because your children will probably make something of themselves.”

Aachen’s mayor Marcel Philipp was also among the well-wishers gathered at the dressage stadium. He lauded the accomplishments of the university, having offered good learning conditions for the students despite their huge numbers. His advice to the students was to foster contacts established during their studies and to join the global network of RWTH graduates, who are committed to supporting “their” university. RWTH Chancellor Nettekoven also appealed to the graduates to keep in mind Aachen as a great location to live and work.

“We need you here in industry and science, because there are still many problems that need to be solved,” pointed out Svenja Schulze, minister of science for North Rhine-Westphalia. In an informal chat with Wenzel Wittich, the chair of AStA at RWTH, she praised the university as being a “pearl in institutionalized science,” which has put high demands on their graduates. “You have all shown exceptional skills. Now use them for a career in business or academics. And say good things about RWTH – the university has earned it.”

Astronaut Dr. Thomas Reiter held the commencement speech. He had just received the Aachen Engineering Prize the night before – an honor which has been awarded by the city of Aachen in cooperation with Sparkasse since 2014. The 58-year old, who is responsible for important projects at ESA, talked about his professional career, his two long-term space missions on the Russian space station MIR and on ISS, which is operated by Europe, the USA, Canada, Russia and Japan. He mentioned that he was influenced early on as a child by the pictures of the moon landing and that he had since thought about how to broaden one’s knowledge beyond the realms of earthly horizons.

Reiter recounted the robust Russian technology, which allowed him to repair an apparatus once by using a guitar string or how “sometimes a kick against the wall” sufficed in order to get the desired function going. The compact functional components of ISS, on the other hand, called for specialized tools as well as experts at ground control. According to Reiter, today’s society is highly dependent on technology, yet many people seem to lack the knowledge about it. He told the graduates – in particular the engineers among them – that they are now witnessing the advent of a new industrial era: an internet of things or industry 4.0 if you will. “I am certain that the graduates are well-prepared for these new challenges,” Reiter said.

At the end of his speech Reiter described his fascinating impressions looking down on Earth from outer space, which were just “overwhelming.” At the same time he cautioned that even as far away as from space signs of war or ecological destruction can be detected. Thus, things don’t seem quite as calm and peaceful as they appear. He appealed to the graduates: “Help bring about a conciliation of our vision of Earth from Space with the actual reality down here, so that they match.”

The graduation celebration, which was financed exclusively by sponsors, such as Sparkasse Aachen in particular, concluded with the traditional tossing of the black graduation caps and Beethoven’s “Ode to Joy.”