"A Fantastic Experiment to Explore Space" 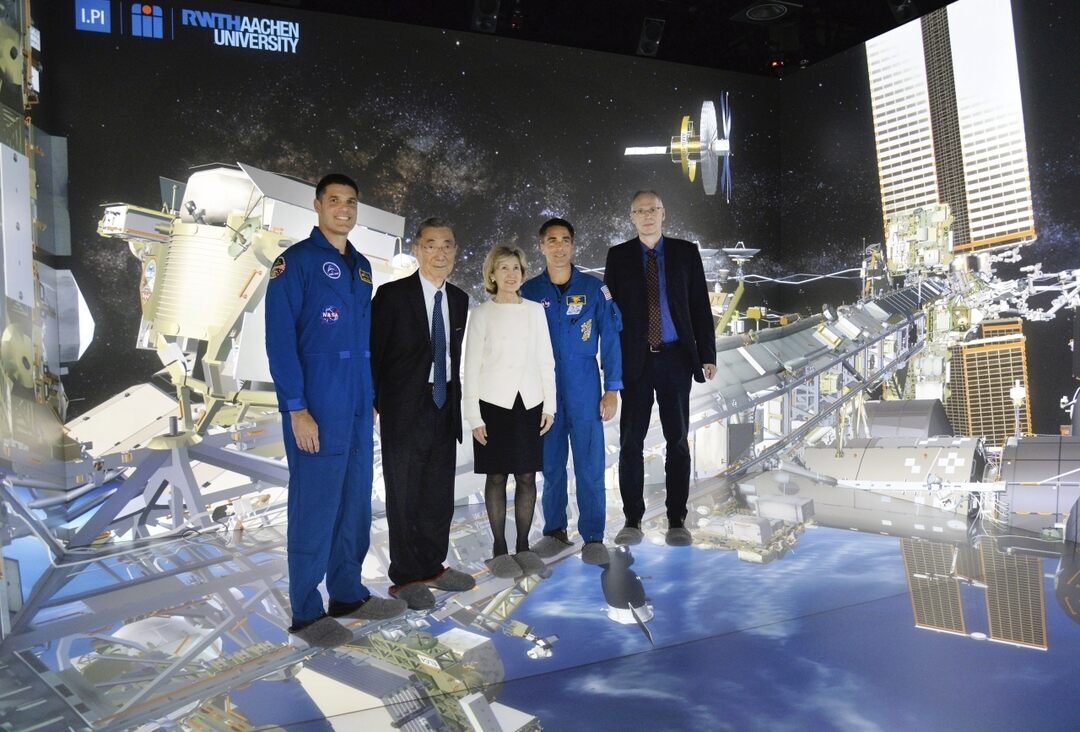 How did the universe begin? This is one of the most fundamental questions in physics, which we hope will be clarified with the help of the Alpha Magnetic Spectrometer AMS-02. In total, over 500 scientists from 16 different countries worked on developing the 1.5 billion- dollar experiment for more than 15 years.

The Alpha Magnetic Spectrometer AMS-02 was installed on the International Space Station, ISS for short, in 2011 in the last mission of space shuttle Endeavour; since then, the seven-ton spectrometer has been measuring cosmic ray particles with unprecedented precision and has already registered 130 billion to date. It is the largest basic research instrument on the space station and is set to provide another ten years of insights into the formation of the universe and processes in the vicinity of black holes and neutron stars.

The AMS-02 project is headed by Nobel Prize winner and RWTH honorary doctor Professor Samuel C.C. Ting from Massachusetts Institute of Technology, MIT for short. Ting received the Nobel Prize in Physics in 1976 and an honorary doctorate from RWTH in 2004. The University has been involved in the project from the very beginning and is working together with Forschungszentrum Jülich, Kiel University, and Karlsruhe Institute of Technology. RWTH Professor Stefan Schael has been coordinating the German research activities since 2000. The researchers are supported by the German Aerospace Center (DLR).

The central element of AMS-02 is a large silicon track detector measuring around six square meters, which is operated by a closed cooling circuit that is maintained at a constant temperature of zero degrees Celsius. Three of the four redundant pumps in the cooling system, which was originally designed to be in operation for three years, have now failed. The spectrometer therefore urgently needs a new cooling system. Over the last three years, a 200-kilogram cooling system was developed by RWTH, in close collaboration with the Massachusetts Institute of Technology MIT, NASA, and other international research institutions. In total, the team comprised 70 members.

In a few months, an international crew of astronauts will embark upon five intensive space missions to ISS to install the cooling system, which weighs 200 kilograms and is the size of a refrigerator. The astronaut crew is formed of Luca Parmitano (Italy), Andrew R. Morgan (US), Christopher J. Cassidy (US), and Jeremy R. Hansen (Canada).

"It is a very difficult mission for the astronauts, which is why the we have to thoroughly prepared for the mission in advance," says Professor Stefan Schael. "Just imagine it is the coldest day to go skiing, and you are wearing a thick hat, a helmet, glasses, thick gloves, and a winter jacket. And you have to open the hood of your car to repair something inside in this outfit – in the middle of the night," adds Christopher J. Cassidy, emphasizing the difficulty of this mission.

To repair the defective cooling system, the astronauts have to find several four-millimeter-thick tubes, cut them, and connect them to the system built in Aachen. "This is extremely precise work that does not allow for any errors. The wrong handle or a missing tool would jeopardize the entire project," says Schael. NASA has developed around 30 new tools to be able to carry out this work with limited motor power in zero gravity. "This shows that this project is not only a great scientific challenge, but also an engineering and organizational one that is extremely complex," emphasizes Kirk A. Shireman, ISS Program Manager.

The new cooling system is so important because the AMS-02 produces a lot of heat, which cannot simply be released in the vacuum of space, despite the prevailing cold there, explains Schael. Liquid carbon dioxide is therefore pumped through the detector, which reduces the temperature accordingly.

The astronauts have been preparing for their mission for years to ensure that every maneuver will be carried out correctly. As well as exercises on models in Houston and an exact model under water to simulate zero-gravity conditions, the astronauts also got to grips with the technology of the cooling system at the I. Institute of Physics at RWTH during their stay in Aachen.

Professor Jürgen Roßmann’s working group at the Institute for Man-Machine Interaction at RWTH, which is supervised by Dr. Michael Schluse at aixCAVE, created a realistic simulation of the ISS. The aixCave of the RWTH IT Center is one of the largest five-sided virtual reality installations in the world and lets the astronauts simulate a realistic, virtual full-scale visit of AMS-02. The cooling system will be brought to the ISS in October, so that the mounting operation can begin in November.

A Prime Example of an International Cooperation

"AMS-02 is a fantastic experiment in space exploration. The team involved in the project is a great example of what the ISS stands for, an international collaboration," says Dr. William Gerstenmaier, NASA Associate Administrator. Canadian astronaut Jeremy R. Hansen is also proud of the unique collaboration between so many research institutions around the world. "We are the visible part of this experiment, but it is important to see the many people who make it all possible and are committed to the success of the project. It is fantastic and we are proud to be a part of it. The experiment is so important to humanity and we want to make sure that it can continue," declares the Canadian.

AMS-02 is supposed to operate until 2028. Under Professor Schael’s leadership, work on the follow-up project AMS-100 is already underway with other national and international research institutions. From 2030 onwards, this instrument will provide new insights into the universe with a sensitivity 1,000 times higher that of the current spectrometer.

It was clear to see that this topic fascinates so many people by the full lecture hall at RWTH. Project leaders and astronauts explained the scientific results of AMS-02 to date in their talk "The ISS - A Global Science Platform in Space". NASA Associate Administrator Gerstenmaier and ISS Program Manager Shireman explained the future of manned spaceflight. Afterwards, astronauts Cassidy and Hansen reported on their ISS missions and the replacement of the cooling system next November.