You Are Here: Honorary Doctorate for Computer Scientist John Mylopoulos

The Canadian scientist is recognized for his seminal work in software engineering, databases, and artificial intelligence. 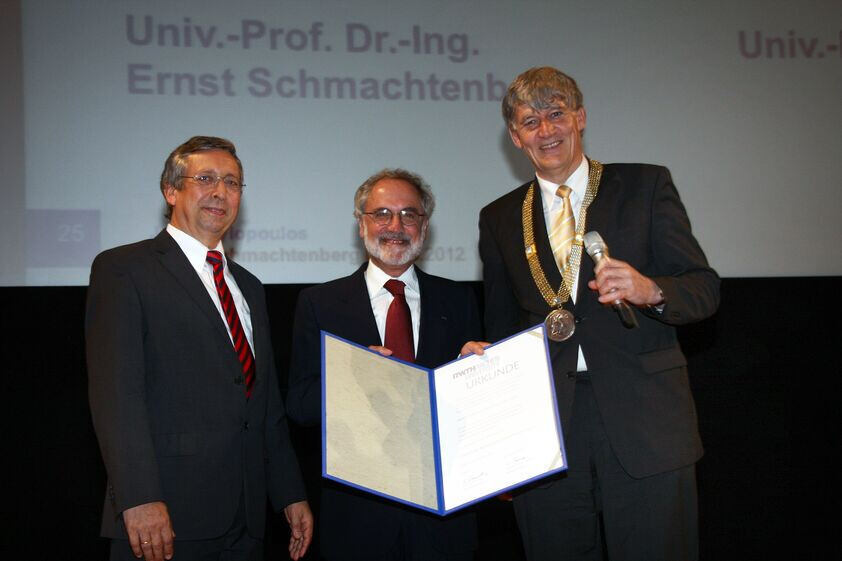 RWTH Rector Ernst Schmachtenberg awarded Greek-Canadian computer scientist John Mylopoulos an honorary academic degree (Dr. rer. nat. h.c.). The award was made at the request of the Faculty of Mathematics, Computer Science and Natural Sciences "in recognition of his excellent and distinctive contributions on the methodology of conceptual modeling as a basis for databases, software technology and artificial intelligence, as well as its interdisciplinary applications."

Mylopoulos, born in 1943, received a BEng from Brown University, and a PhD from Princeton in 1970. Since 1971, he has been a professor at the University of Toronto, and also at the University of Trento, Italy, since 2009. He designed the modeling languages Taxis, Telos and i*/Tropos, and is thus considered the father of formal, conceptual and semantic data modeling, and as such, a precursor to the increasingly more important approaches to today's model-base software development. In 2011, Mylopoulos received an ERC Advanced Research Grant from the European Community, he is a Fellow of the Association for the Advancement of Artificial Intelligence (AAAI) and of the Royal Society of Canada, and he has a seat on the Supervisory Board of the German Research Center for Artificial Intelligence.

For many years, Mylopoulos has been active in cooperative research projects with RWTH, e.g., doing several research stays in Aachen and inviting Aachen researchers to Canada. This cooperation has been documented in joint publications.

Before the ceremony, a scientific colloquium entitled "40 years of computer science at RWTH" took place, to which graduates and alumni from Aachen's Computer Science Department had been invited.