Special award for Professor Reinhart Poprawe ahead of significant trade fair in Munich. 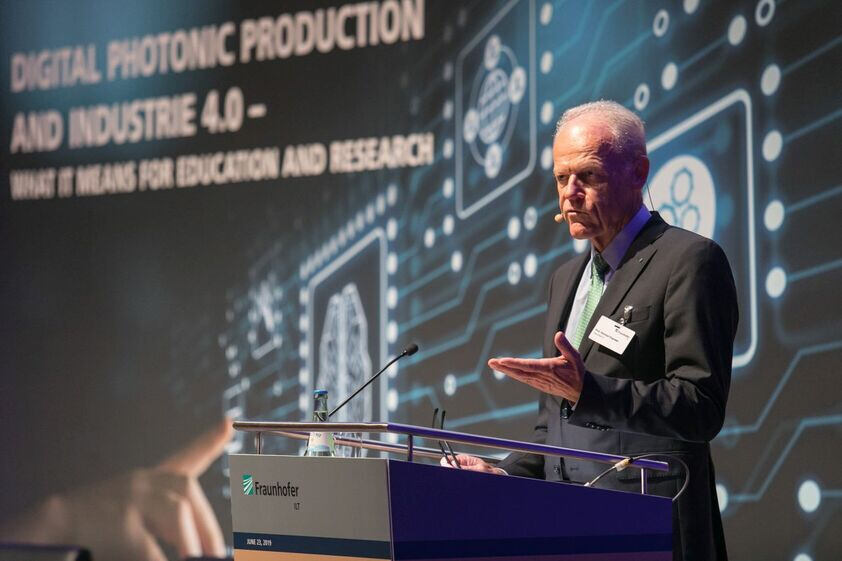 Copyright: © Fraunhofer ILT/Klaus D. Wolf Professor Reinhart Poprawe welcomes visitors at the symposium Digital Photonic Production and Industry 4.0 – What Does This Mean for Education and Research?

On June 23, 2019, Professor Reinhart Poprawe looked back on his eventful career as a researcher at a special event in Munich. On the occasion of his retirement in the fall of 2019, he was honored at the symposium "Digital Photonic Production and Industry 4.0 - What Does This Mean for Education and Research? ahead of the world's leading trade fair LASER World of PHOTONICS.

More than 300 guests from academia and industry honored Poprawe’s great dedication to laser technology and the research location of Aachen as Chair for Laser Technology LLT at RWTH and director of the Fraunhofer Institute for Laser Technology – ILT for short. Some of the innovations displayed in the Munich exhibition halls can be traced back to developments or even patents from Fraunhofer ILT.

The professor has also been awarded numerous other accolades in the past, including the Arthur L. Schawlow Award by the Laser Institute of America LIA and an honorary professorship from Tshingua University in Beijing, China, which he received as RWTH Rector's Delegate for China in 2014

The chair is also popular and rightly recognized for his exemplary teaching, as Professor Ulrich Rüdiger, Rector of RWTH, emphasized at the symposium in Munich: "Our students have already awarded Professor Poprawe the Teaching Prize of the Faculty of Mechanical Engineering four times for his teaching talent and dedication”. On the one hand, the award honors an exceptional professor who easily accepted and used new formats such as the flipped classroom. On the other hand, it also reflects the great significance attached to students and teaching at the Chair of Laser Technology LLT at RWTH and Fraunhofer ILT. Over his tenure, Professor Poprawe was the first examiner for around 200 doctoral theses, and together with his team, he supervises up to 80 term papers and Bachelor's, Master's, and Diplom theses every year.

Professor Rüdiger's laudatory speech focused on one topic in particular. When he moved to RWTH in 2018, the rector was particularly impressed by the University’s interdisciplinary research culture, which Professor Poprawe has been promoting in its purest form for many years.

The professor is one of the initiators of the RWTH Aachen Campus and its integrated photonics cluster and was instrumental in founding the strategic I3 institute network Research Center Digital Photonic Production. In this network, 16 different institutes from 6 faculties are involved in the further development of photonics on a foundational level, particularly in the area of digital production. In addition, Poprawe was actively involved in the Wissenschaftliche Gesellschaft Lasertechnik WLT and, together with his research fellows, significantly contributed to the formulation of effective research programs for the Federal Ministry of Education and Research – BMBF for short – in the field of laser technology.

The professor started his career as a laser expert in 1985 as head of department of laser-oriented process development at Fraunhofer ILT. Poprawe put his findings into industrial practice four years later as managing director of Thyssen Laser Technik GmbH in Aachen. In 1996, he returned to RWTH as Chair of Laser Technology LLT and also took over the management of Fraunhofer ILT at the same time. While turning this into the largest institute for applied laser research in Europe, he was also involved in the further development of RWTH, particularly in the Excellence Initiative of the German government and in international university cooperations as Vice-Rector for Research, Structure, and Human Resources Development and as Rector's Delegate for China.