You Are Here: Kármán Award for Christine Blesinger

It’s possible: Even at a time when students‘ increased workload is always at the focus – Christine Blesinger showed that studies and volunteer work are compatible with each other. The current academic staff member at the RWTH Aachen Chair of Technical Thermodynamics did not just hit the books to learn about power transmission, fluid mechanics, and machine elements during her mechanical engineering studies.  She was also involved in many roles and offices for the concerns of students and RWTH Aachen. She received the 2012 Kármán Award from the University for her exemplary performance. The RWTH Aachen Senate approved the awarding of this prize. The award honors Christine Blesinger’s outstanding services in teaching and her particular involvement with RWTH Aachen combined with excellent academic achievement. 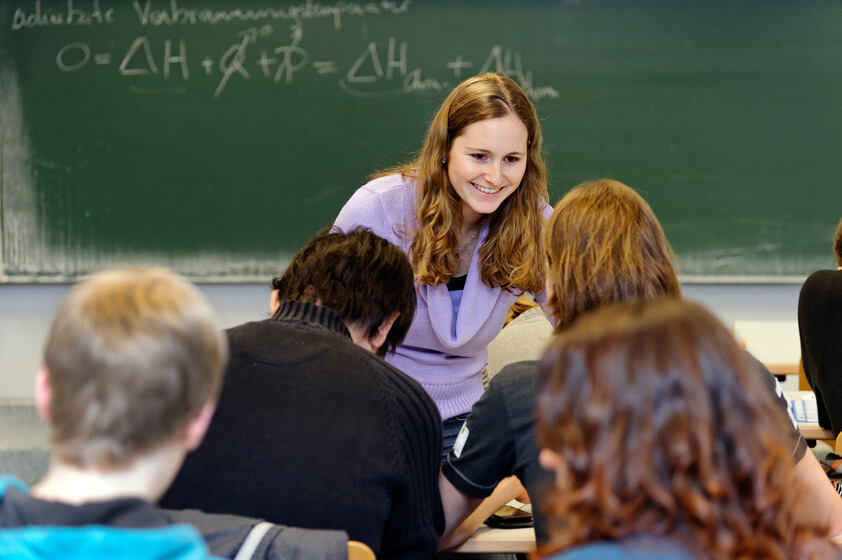 "There is always the option to let processes of change happen or to actively shape them”, explains Blesinger. Blesinger, born in Trier, chose the latter. Even as a school student, she was involved in the student representative body at Rhein-Sieg-Gymnasium in Sankt Augustin. Common activities such as party organization, kiosk sales, and the school newspaper were substituted during her university studies with purportedly drier topics such as finance, building projects, the reorganization of examination regulations, or the improvement of teaching. “Examination regulations that are too strict can really hurt,” reports the award winner. In order to represent the interests of the students, she worked in the RWTH Aachen committee of framework examination regulations from 2008 to 2009. As in other committees, the intention was to find a compromise that benefited everyone. Christine Blesinger is pleased with the result: “We had to make a few comprises in mechanical engineering. However in doing so we attained better conditions for students in other faculties, particularly surrounding oral exams.”

In the following semesters, many other activities in university committees took place – for example in the faculty council, the budget and structure committee, the committee for the use of student feeds or as speaker for the Students’ Group in the Senate. “Christine Blesinger’s finest hour was when she had to prove herself in the nationwide competition Excellence of Teaching,“ appraised Prof. Dr. Dr. Wolfgang Thomas. The former Senate chair held the congratulatory speech for Blesinger during the award ceremony in the Main Building Aula.

Ambassador of the "Aachen Way"

According to Thomas, the engineering student first worked as part of the editorial team and was involved with the proposal submission. However in his opinion, her greatest service was presenting a crucial part of the presentation to a jury in Berlin. “Ms. Blesinger took to the stage without fear, after the dignified president of TU Munich had just spoken. With her enthusiastic and skilled professional, she won over the judges’ hearts,” remembered the Chair of Computer Science 7. Christine Blesinger is an ideal ambassador of the “Aachen Way”, the collaboration of all groups, when central matters of the University are concerned. RWTH Aachen received the funding means requested to implement the planned improvements in teaching.

In 2011, Blesinger successfully finished her mechanical engineering studies. She is currently completing her doctoral studies at the Institute of Thermal Dynamics. Instead of student fees or University strategies, her interest lies in “multicomponent diffusion in fluids”. In the meantime the engineer is a member of the Senate again: as a representative of academic staff members.