RWTH Aachen has provided significant contributions to the discovery of the so-called Higgs boson at CERN, the European Organization for Nuclear Research. Thomas Rachel, Parliamentary State Secretary at the Federal Ministry of Education and Research (BMBF), has now visited the University to get more detailed information on the discovery. Commenting on his visit, Rachel said that “I share the delight at this outstanding achievement in particle physics with the Aachen researchers, which is also  a success for the Federal Ministry's long-term funding strategy for basic research projects." The member of parliament adds that “with their contributions to the discovery of the Higgs particle at CERN, the Aachen scientists played a major part in providing the answer to a decades-old fundamental question in physics.“ 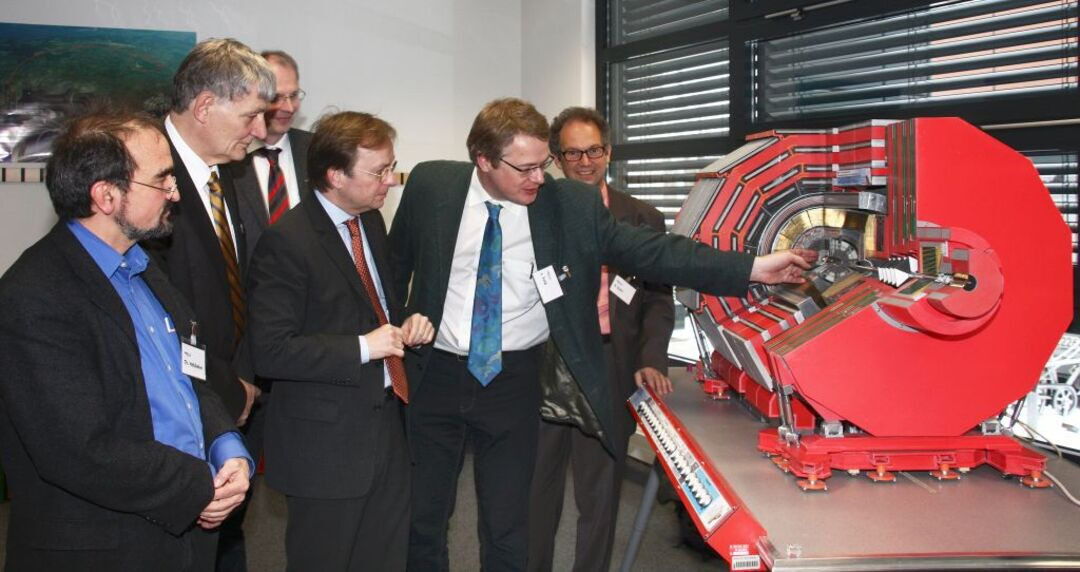 It took about 20 years to assemble and install the Large Hadron Colliders (LHC) with its particle detectors, from the first plans to completion and the first results. During all these years, the project has received funding from the BMBF.

As Professor Achim Stahl, RWTH Chair of Experimental Physics and Spokesperson for the German groups participating in the CMS experiment, puts it: “Without the reliable, long-term support from the BMBF, this success would not have been possible.” In 2012, for example, the Ministry approved to support RWTH’s contributions to the CMS experiment with a further 7 million Euros.

At CERN, with the help of two large particle detectors, particle physicists are investigating the reactions of colliding protons that travel at close to the speed of light. Three RWTH physics institutes have significantly contributed to the construction of the CMS detector.

In July 2012, there were hints of the discovery of a new particle that was declared to be a likely candidate for the long-sought Higgs particle. After the investigation of billions of further collisions, there is more evidence that this assumption was correct. In March 2013, all 2012 results of the CMS experiment will be presented at a conference in Geneva, which is expected to provide final clarification of the issue.