You Are Here: Ground Breaking Ceremony for New ICT Cubes 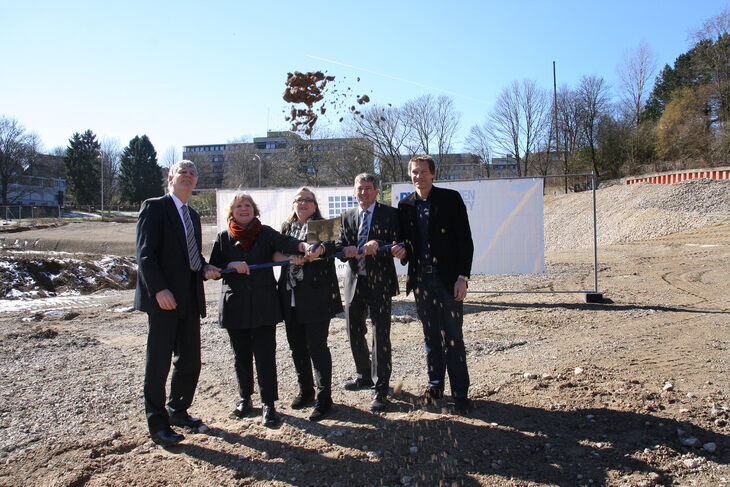 The ground breaking ceremony for the new ICT Cubes on Monday, March 4, 2013, kicked off another joint project between the Federal State of NRW, RWTH Aachen, and the Bau- und Liegenschaftsbetrieb NRW, BLB NRW for short, as contracter and rentor. About 20 million Euros of federal state funds are going towards the new building for the Faculty of Electrical Engineering and Information Technology on Kopernikusstraße. RWTH Aachen Rector Ernst Schmachtenberg, the Dean of the Faculty, Professor Rudolf Mathar, and deputy head of the BLB Aachen branch, Ute Willems, broke the ground together.

"The construction of the ICT Cubes is important to the Bau- und Liegenschaftsbetrieb NRW, becaus it allows us to bring about the most modern infrastructure for these future-oriented research areas and to strengthen Aachen as a univeristy location," emphasized Ute Willems. The approximately 9000 square meter building is expected to open at the end of 2014.

Six institutes of information and communication technology will be housed in the new building, shaped like a double cube, thus the name ICT Cubes. The two buildings will be connected by a glass bridge. This functional and communicative point of intersection will house service areas used by all the institutes, such as seminar, conference, and social spaces. The compact and efficient development of the property allow for a lot of open sace, that can be used as a green campus. Aachen office kadawittfeldarchitektur was responsible for the planning.

An extraordinary facade will underscore the effect of the Cubes in the Park. The faculty actively participated in shaping the cubes: statements from famous scientists in their field will be translated inot a digital number code. This code - made up of the numbers 0, 1, and 2 - stands for one of three types of blades in the facade. As a result, the sun protection will become a type of information carrier for the chairs and institutes represented, such as the quotation from coding theorist Richard Wesley Hamming, 1915 to 1998: It is better to do the right problem the wrong way than the wrong problem the right way.