RWTH Researchers Among the Finalists for the Deutscher Zukunftspreis

Researchers from RWTH Aachen University, the Max-Planck-Gesellschaft, and Covestro AG have been nominated for their research on carbon dioxide as a raw material for plastics. 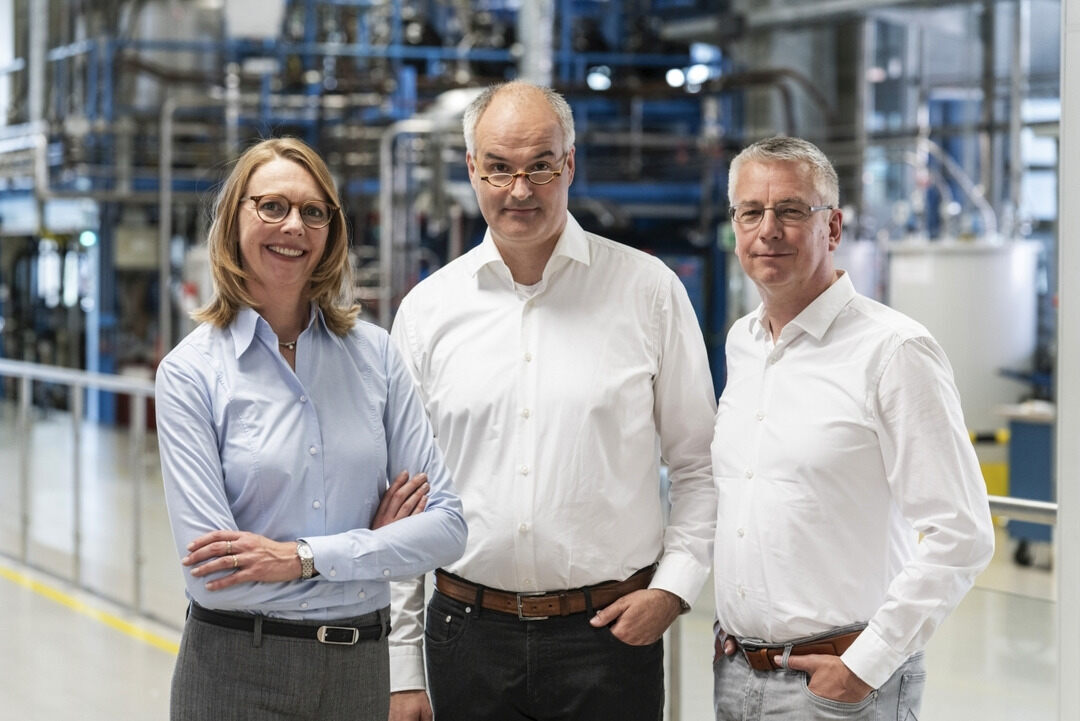 There are differing views on the chemical compound CO2. While most people consider it primarily a climate-damaging greenhouse gas, Professor Walter Leitner, Dr. Christoph Gürtler and Dr. Berit Stange see it as a source of carbon, a component of most plastics and fuels.

Leitner is Chair of Technical Chemistry and Petrochemistry at RWTH and director at the Max Planck Institute for Chemical Energy Conversion. Dr. Gürtler is responsible for new processes and products at Covestro AG, and Dr. Stange is concerned with the transition to a circular economy for polyurethane plastics. The chemist and her colleagues have developed a method to utilize CO2 for the manufacture of plastics. They have been nominated for the 2019 Deutscher Zukunftspreis for developing this novel catalytic process and its successful application in the manufacture of products.

Now, together with two other research teams, they have reached the final round of the research competition. On September 5, they presented their innovation at the Deutsche Museum in Munich. On November 27, the Deutscher Zukunftspreis will be presented by German federal president Frank-Walter Steinmeier in Berlin.

With the new process, a part of the crude oil used in chemical production can be replaced by CO2. Covestro’s pilot plant is already capable of producing up to 5,000 metric tons of polyol per year. This substance is further processed into polyurethanes that are used, for example, as foams in mattresses. Other applications of polyurethanes include flexible foams in car seats and rigid foams in insulating materials.

According to Professor Leitner, the use of CO2 was made possible by a breakthrough in catalysis research: “CO2 is reluctant to form chemical compounds with other substances. The challenge was to develop a tailor-made catalyst to control the reaction in such a way that it is both economical and efficient.” A catalyst causes the reaction partners to form compounds by lowering the activation energy for the conversion and steering it in the desired direction. Experts from Covestro and the CAT Catalytic Center, a joint facility of RWTH and Covestro AG, have found a suitable catalyst for incorporating CO2 into polyol – for Leitner an “exemplary collaboration between application-oriented basic research and research-based industry.”

RWTH rector Ulrich Rüdiger is pleased with this successful cooperation: "Professor Leitner's research activities on the catalytic conversion of carbon dioxide represent, in a nutshell, the University's Excellence Strategy with its motto of "Knowledge. Impact. Networks" and thus can be seen as a prime example of our university-based, non-university and industrial research. Just as our institutional strategy describes the knowledge creation process and its transfer into integrated and interdisciplinary networks, Leitner's innovations generate substantial knowledge that has an enormous impact on science, society, as well as our climate.”

This technology can also help to close the carbon cycle. “We see considerable added value potential for industry in the use of CO2,” says Gürtler. Many detailed developments made it possible to make the process more sustainable. In addition, the tailored incorporation of CO2 can improve the properties of the product. “Thus, the innovation makes sense not only ecologically, but also economically,” explains Stange.

The CO2-based production process also opens up a perspective beyond the production of polyols and polyurethanes. “We have shown that it is possible to use CO2 as a raw material and thus reduce the CO2 footprint of the chemical industry,” says Leitner. “Following this pattern, we want to make further chemical processes less dependent on fossil raw materials. Pursuing this goal provides a strong incentive for further basic research in the field of catalytic CO2 conversion.”