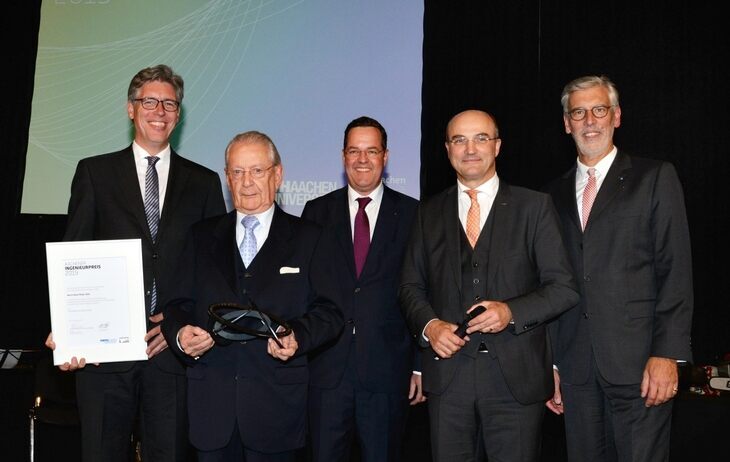 The entrepreneur was honored at Coronation Hall in Aachen City Hall for his engineering innovations, economic success, and long-term social commitment.

Hans Peter Stihl turned the family company STIHL into the global market leader for chain saws. He also stood out outside the company due to his commitment to many social causes. Hans Peter Stihl, son of the company's founder Andreas Stihl, is a man who has given extraordinary impetus to technology, economy, and society. Hans Peter Stihl received the Aachen Engineering Award 2019 in a special ceremony at Coronation Hall of Aachen City Hall in recognition of his entrepreneurial life's work, which combines engineering innovation with economic success and long-term social commitment, as RWTH Rector Professor Dr. Ulrich Rüdiger emphasized during the ceremony. "The prizewinner represents fair cooperation based on partnership, sustainable management, and great commitment in many areas”. Aachen's Lord Mayor Marcel Philipp added: "People like Hans Peter Stihl make Germany a sought-after location for innovation.

The 87-year-old Hans Peter Stihl received much applause and recognition from the audience during the award ceremony, which was accompanied by the Old Abbey Jazzmen playing rousing Dixieland tunes – a musical request from the prizewinner, who is himself an enthusiastic musician. The audience got to know an incredibly multifaceted entrepreneur. The director of the VDI, Ralph Appel, stressed that prizewinners such as Hans Peter Stihl were role models for the young generation of future engineers. "They have made a significant contribution to the perception and further development of engineering with their work," he explained.

In his laudatory speech, Heinrich Baumann, Vice President of the Stuttgart Region Chamber of Commerce and Industry, described Hans Peter Stihl as an engineer who has promoted product development and the company with unbelievable innovative power over decades and continues to do so. "It is this fascination and enthusiasm for the technical details and innovations as well as his visionary thinking that have been urging him on for decades. His goal is to get more out of every product, but also out of every employee and not least out of himself," reported Baumann. In this way, he has turned customers into true fans of the company and built up a brand with worldwide appeal.

The laudator also praised the "great man Hans Peter Stihl, who in his various roles has always retained the ability to look beyond his own company's and industry's horizons and be fully committed to his community. Those who are not prepared to do so lack the legitimacy to complain afterwards. This applies even more for engineers," said Baumann.


The prizewinner then explained the fascinating power of chainsaws using three direct examples: In his luggage he had a 60 year old and now legendary "Contra", the first gear less one-man chainsaw from Stihl, as well as two current models: the MS500i and the MSA220, which he used to explain the technical achievements in his profession with an engineer’s enthusiasm. "It is still important to me today to hold the latest developments of our engineers in my own hands and to be able to put them through their paces in the forest and garden. I am still fascinated by the technology of our machines," said Hans Peter Stihl.

Award Dedicated to Family and Employees

The prizewinner modestly dedicated the award to his family and the many employees of the family-owned company: "You are presenting me with the Aachen Engineering Award 2019 for my entrepreneurial life's work, which fills me with pride. But I do not want to claim this great honor for myself alone: Without our employees, but above all my siblings and now the next generation of the Stihl family, such an achievement would not have been possible. In particular, the decades of office sharing with my sister Eva Mayr-Stihl have proven to be an important factor for success.” And he added: "It is a great honor and pleasure for me to be accepted into the exquisite ranks of the winners of the Aachen Engineering Award here in this impressive ambience at Coronation Hall. This is such a historically important place. I would like to extend my sincere thanks for this!

The prize is jointly awarded by RWTH and the City of Aachen thanks to the kind support of the Association of German Engineers – VDI as prize donor. After Professor Emmanuelle Charpentier, a scientist, won last year, the Advisory Board of the Engineering Award deliberately opted for a medium-sized entrepreneur in 2019.

Keynote Speech at the Graduation Celebration

Hans Peter Stihl gave a keynote speech to around 5,000 participants at at the RWTH Graduation Celebration on September 14.